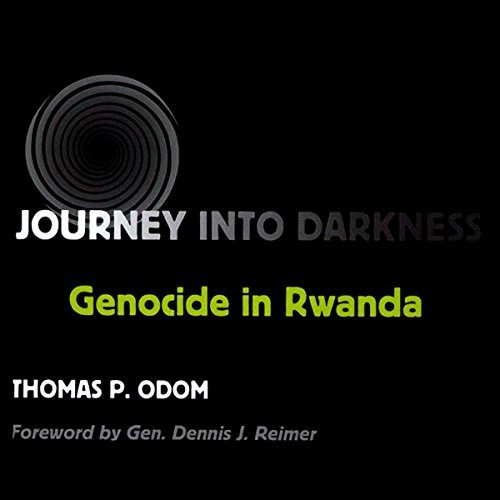 By: Thomas P. Odom
Narrated by: Claton Butcher
Try for £0.00

In July 1994, Thomas P. Odom was part of the U.S. Embassy team that responded to the Goma refugee crisis. He witnessed the deaths of 70,000 refugees in a single week. In the previous three months of escalating violence, the Rwandan genocide had claimed 800,000 dead. Now, in this vivid and unsettling new book, Odom offers the first insider look at these devastating events before, during, and after the genocide. Odom draws on his years of experience as a Defense Attaché and foreign area specialist in the United States Army to offer a complete picture of the situation in Zaire and Rwanda, focusing on two U.S. embassies, intelligence operations, U.N. peacekeeping efforts, and regional reactions. His team attempted to slow the death by cholera of refugees in Goma, guiding in a U.S. Joint Task Force and Operation Support Hope and remaining until the United States withdrew its forces forty days later. After U.S. forces departed, Odom crossed into Rwanda to spend the next eighteen months reestablishing the embassy, working with the Rwandan government, and creating the U.S.-Rwandan Demining office. Odom assisted the U.S. Ambassador and served as the principal military advisor on Rwanda to the U.S. Department of Defense and National Security Council throughout his time in Rwanda. His book candidly reveals Odom's frustration with Washington as his predictions that a larger war was coming were ignored. Unfortunately, he was proven correct: the current death toll in that unfortunate country is close to three million. Odom's account of the events in Rwanda illustrate not only illustrate how failures in intelligence and policy happen, but also show that a human context is necessary to comprehend these political decisions.

“ Journey into Darkness is an excellent contribution to the understanding of the Rwandan genocide and its regional consequences. It is a ‘must read' piece of work for all decision and policy makers in governments or private civic organizations.” (Dr. Zac Nsenga, Ambassador of Rwanda, Washington, D.C.)
“Odom became an indispensable set of eyes and ears for the embassy, confidant of Ambassador Rawson and instrumental in re-establishing an American presence. ...Odom's book is a welcome contribution to the literature on Rwanda. (Robert E. Gribbin, former U.S. Ambassador to Rwanda)
“Odom's story is so vivid the reader can easily picture the events and feel the frustration resulting from the milieu of miscommunication, distance, culture, preconceived notions, and personal agendas…his account of the culture, the military, and the Goma refugee situation in Zaire provides an excellent background for the entire crisis.” (Military Review)

What listeners say about Journey into Darkness

What was one of the most memorable moments of Journey into Darkness?

This is actually a very good book, It is well written and opens a world of diplomacy and a view of the developing world unlike anything I have previously encountered.

The voice over artist, has the most boring voice it has ever been my misfortune to encounter it sounds as if he isn't quite following an auto-cue, following a large ingestion of sleeping tablets.

Was Journey into Darkness worth the listening time?

By all means read the book, it is excellent, but give the audible copy a miss.

I downloaded this audio book and all I got was the sample!! Am very angry as I have wasted my money and will want reinstating. Come on Audible sort it out!!

If you're after an analysis of the Rwanda genocide, what I was hoping for, this isn't it.

It does provide a from-the-field perspective of trying to be effective in the face of the many dysfunctional levels of US policymaking.

One of the most tiring audiobooks in my experience

What would have made Journey into Darkness better?

The editor should have banned the word 'I'. That alone would have increased useful content by 100%. Which still would have been a meager dissapointment. I gave up on content and went fishing chapter by chapter. Then gave up altogether.

Has Journey into Darkness turned you off from other books in this genre?

Whatever he was paid is enough. He had little enough to do.

What character would you cut from Journey into Darkness?

I harbor suspicions there could be useful matterial in the last third, but by then I no longer could stomach the effort. And I speak with some authority having listened to Will Durants 'Age of Faith' in its entirety.