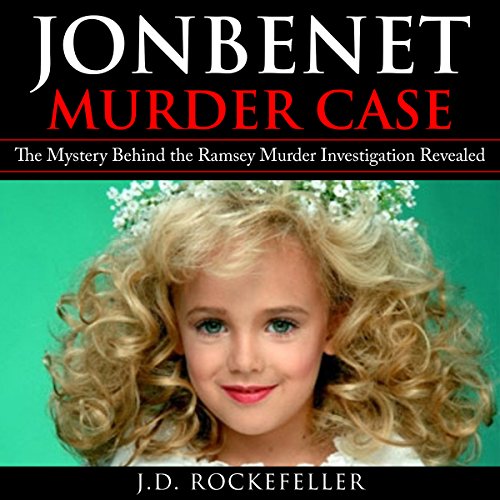 JonBenet Patricia Ramsey was a young promising beauty queen at an early age of six. Unfortunately, it was at this age when a tragic incident shocked not only the beauty pageant scene but the entire world. The young beauty queen was brutally murdered in Boulder, Colorado. The brutal crime happened in the basement of the young star's own home on the 26th of December, 1996. Nineteen years have passed, yet the crime is unresolved. Up until this moment, no one has been convicted of the crime. Experts say that this is due to the fact that when the incident happened, the Boulder Police Department were inexperienced in handling murder and homicide cases. In fact, a lot of people who were extremely interested in this particular case revealed that the authorities were not able to execute the standard operating procedures right after receiving the 911 emergency calls. Also, they did not accept help from more experienced agencies such as the Denver Police Department available nearby.

This book reviews and analyzes the procedural mistakes made by the Boulder Police Department throughout the course of the kidnapping and subsequent murder investigation. These mistakes are specified and interpreted as to how the department should have handled the investigation in order to protect and preserve the crime scene evidence that was eventually damaged due to carelessness. Next, the theory of the main suspects, John and Patsy Ramsey, as well as a possible intruder are discussed while addressing the physical and circumstantial evidence gathered during the case and how the mistakes of the police investigation might have hindered a conviction. So what really happened? This book aims at providing you the answers.

Most poorly-written book I have ever read

What disappointed you about JonBenet Murder Case?

The writing is appalling. Sentences are long, grammatically incorrect, contain incorrect word choices and are incomprehensible. The writing is so bad that it is laughable in places.

What was most disappointing about J.D. Rockefeller’s story?

The writing is shockingly bad. I have never read a book so poorly written.

The performance was hampered by the poor writing.

My overwhelming reaction is shock - that something like this could be published.

Don't waste your money on this book - read about the case on the internet or invest in a good book.

Could well be the worst ever.

I'll begin by saying I'm of Medicare age. This book made me think of two OLD men sitting down with a drink and putting together a "book". I have no idea of the verity of the content because it put me to sleep so soon. The narration is just awful. The writing is sophomoric.

May be the worst Audio Book I've heard. Period.

What disappointed you about JonBenet Murder Case?

Writing was horrible. Reading was painful to listen. Nothing made sense. Sounded like it was a story that was put through a content spinner to change wording. Absolute junk. Don't get this book.

Read like he was reading cue cards. He stumbled along. Bad writing is hard to read, but really wish I had passed on this one when I read the other bad reviews.

could not even follow the time line. no mention of evidence not a good resource

What was the author thinking??

OMG!!!
JD Rockefeller has basically "ripped off" excerpts from other places and completely destroyed the whole story especially by having Roy Wells as the narrator. It's disgraceful.
Authors please note....
If you want to sell your audible books get a voice that is good to listen to.. Simple!!
This guy sounds like a bad robot. Punctuation is woeful. Mistakes in pronunciation..
Have a listen to Kevin Pierce if you want to hear the perfect voice for audible books.

Would you recommend JonBenet Murder Case to your friends? Why or why not?

Don't even consider this version of the Jon Benet Ramsey saga.