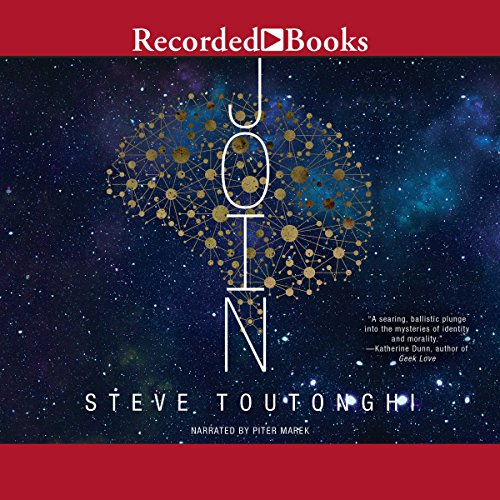 What if you could live multiple lives simultaneously, have constant, perfect companionship, and never die? In the tradition of classic speculative fiction from David Mitchell and Philip K Dick, Join is a literary sci-fi thriller that brings to life the "future of the mind" in which humans can merge consciousnesses to form permanent "Joins", expanding life and consciousness - but at what cost?

In an alternate near future, Join allows for the fusing of several minds into a single consciousness with multiple bodies. But best friends Lucky and Leap encounter a terrifying malfunction in the Join technology and discover that the light of this miracle technology may be blinding them to its horrors. As they move into the heart of the new North America, devastated by environmental ruin, they meet the architects of a new kind of human consciousness, and their trust in each other becomes their only guide through the moral hazards of a society in which individual identity has come undone, and a sadistic killer with dozens of identities follows them in relentless pursuit.

Literary sci-fi that poses major philosophical questions while possessing the same propulsive quality of Mort(e) and the work of Philip K. Dick. An unconventional narrative flow shifts between the various consciousnesses of each character, settling into a nice rhythm while keeping listeners on their toes.

but not impressed with the story line. I had to rewind a few parts to understand better some hard sci-fi points . Also, poor ending In my opinion.

The concept was really intriguing but I felt that perhaps would it better to stretch out details and stories to more books instead of putting everything in this one. I would prefer more detailed background story and even more explained of sci-fi tech. Enjoyable in overall

I thought the concept was really interesting and could've been engaging, but the execution of it left a little to be desired.
All of the joins felt, personality-wise, the same to me. Even the ones that were supposedly &quot;crazy&quot; had this same moderate tone. I got the feeling that it was bc it was assumed that joining with other people would kind of polish the sharp edges of people or something. But what about personality traits that would be compounded when joining? It felt like, because there were so many personalities in one join, every join had no personality. Along the same lines, joins where different criteria for joining weren't really explored fully. They were mentioned, but not really focused on.

I felt as though the book focused on one of the least interesting topics in this world. I'm not saying that it wasn't important for a deeper understanding of these characters and setting, but it could have been woven into a larger, more interesting story. I also didn't love some of the stylistic choices of the author- the timeline and the order that information was revealed to us seemed disjointed at times and could take me out of the story.