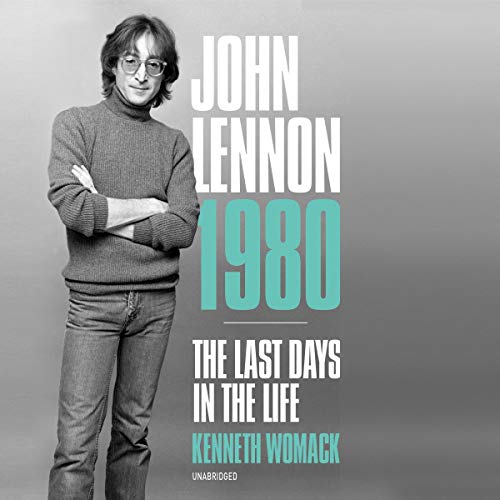 By: Kenneth Womack
Narrated by: Paul Woodson
Try for £0.00

The story of the legendary musician’s incredible last year.

John Lennon 1980 traces the powerful, life-affirming story of the former Beatle’s remarkable comeback after five years of self-imposed retirement. Lennon’s final pivotal year would climax in several moments of creative triumph as he rediscovered his artistic self in dramatic fashion. With the bravura release of the Double Fantasy album with wife, Yoko Ono, he was poised and ready for an even brighter future only to be wrenched from the world by an assassin’s bullets. John Lennon 1980 isn’t about how the gifted songwriter died, but rather, about how he lived.

What listeners say about John Lennon 1980

As a Lennon fan of over 40 years now, I am always a little cautious about the author's intent when it comes to biographies of the late Beatle. Scandal sells, and I've no interest in that. But I've also no interest in blind hero worship either.

This book never falls in to either trap. It feels like a relatively honest account of Lennon's last year. Never over playing either his gifts or his demons, instead the author delivers a very human story. I like bios where we're always fully aware that the subject dresses by putting on his trousers one leg at a time . John Lennon was certainly a flawed man, but that puts him in good company with the rest of humanity.

It's both comforting and sad to read how happy and enthusiastic he was about life and the future in late 1980. A beautifully read listen.

If you’re a fan of John Lennon, I’m sure you find this very interesting. As we all know, the ending is desperately sad. Thankfully we are saved too many gory details to concentrate on what his life was like in those last few years.

really enjoyed this book, interesting to find out about his years before his return.

This is a highly-detailed and interesting book which has been meticulously researched by the author. It’s packed with information about Lennon’s mid and late 70s life; the ‘Lost Weekend’, life with Yoko at the Dakota, the ‘house husband’ years and all the demos and recording sessions along the way.

Much as I loved the content, Paul Woodson’s narration is distracting. He has a peculiar and rather grandiose way of reading out years (e.g “NINE-*TEEN* SEVEN-TEE-SEVEN”). As there are so many years mentioned in this book, it’s hard to ignore and grows increasingly annoying as the narrative progresses. I was interested in listening to Womack’s books on Harrison and George Martin, but I don’t think I can face more ‘weird years’! However, Womack’s Abbey Road book (Solid State) has a different narrator and is recommended.

Enjoyable and interesting account of John Lennons final year.
Captures the excitement that Lennon felt towards returning to the music scene and the creative process that he experienced in creating the double fantasy album. The end of Lennon’s life was tastefully done and the audiobook really brought New York 1980 to life.

just beautiful but Amazon won't allow such a short review for some reason so have had to add, just beautiful.

I found this book to be well written and very entertaining. It does a great job telling the story of John Lennon's final year as well as filling in the backstory of the previous decade that led up to some of the events in his life in 1980. I have always seen the photos of the Lennon's in Bermuda, in the Dakota and Central Park, or recording their final album, but I never really knew the stories around them. This book goes into great depth and brings the stories surrounding these events, as well as many others, into light. The narration is excellent as well.

So glad this book was focusing on the life of John, Yoko, and their friends. The details of interactions with bandmates, producers, and even people they met on vacation. This book gave a great sense of what may have been happening in the last few months of John Lennon‘s life. Relieved that this was not about the tragic day, but rather what was making John tick as he approached his 40s. As a Beatle fan, I appreciated so many never heard before stories about this complex man.

John Lennon 1980 is a book about the last year of John’s life. But it doesn’t have a depressing feel to it. The book manages to chronicle that final stretch of his existence in a way that’s engaging and thoughtful. A big chunk of the book has to do with him making his last album Double Fantasy. That’s the one downside to this book for me... I’m not that familiar with that album, so for it to be such a big focus, at times I was a bit lost. Besides that I loved this book and Lennon himself

One of the best books ever written on John Lennon or the Beatles. It’s a great “inside” look at the most prolific composer in history. A must read for any Beatles or Lennon fans!