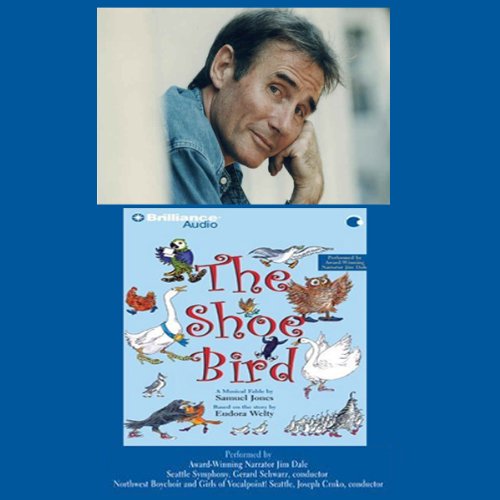 In this Q&A session, narrator Jim Dale and Paul Schwendener, co-producer of The Shoe Bird, talk about what makes this story so special, and why Jim says The Shoe Bird "is one of the best audiobooks I�ve ever made".

About The Shoe Bird:

Seventy years ago, the musical fable Peter and the Wolf unexpectedly took the world by storm. Written and composed by Serge Prokofiev, this droll story for narrator and orchestra has sold millions of recordings in countless versions, narrated by great performers from Sir John Gielgud to Sting. The only problem up until now has been that Peter and the Wolf - composed specifically for children, and featuring a narrator with orchestra - is practically the only piece of its kind. The vast audience that loves Peter has not been able to find a similarly enchanting musical story.

But now all that will change! The Shoe Bird has arrived!

In The Shoe Bird, multi-Grammy-award-winning performer and Guinness World Records� holder Jim Dale brings to life a flock of unforgettable bird characters: Arturo the parrot, Gloria the goose, Minerva the owl, and even the extinct Dodo! This is Eudora Welty's fantastical story of how some feathered friends made a fateful switch from flying to wearing shoes, little knowing that they would soon become the prey of Freddy the Cat!

What listeners say about Jim Dale Talks About The Shoe Bird

Jim Dale is skilled. He makes many stories leap off the page. While this interview is short, it was an enjoyable listen. Jim Dale's voice is so diverse and helps make each character come alive. I would listen to any book Jim Dale would narrate. Jim talks of other books he has narrated, including the Harry Potter series, and I intend to seek them out. I loved Harry Potter, the audio version, much more than the written word or the films because the characters were so authentically presented.

Its free and Informative

The dialog gives the tings that got the narrtor to like the story he did and things he thought the listener would like and I think I will buy it. The part at the end was a nice tidepit to look into do thx for that.

This is a short but sweet audio interviewing Jim Dale about this recording. His voice is of course beloved as a wonderful narrator. It’s interesting to get his insights about what attracted him to this work and to narrating generally.

This short interview is a nice snippet of thoughts from the talented Jim Dale. Even in an interview, his storytelling ability is phenomenal.