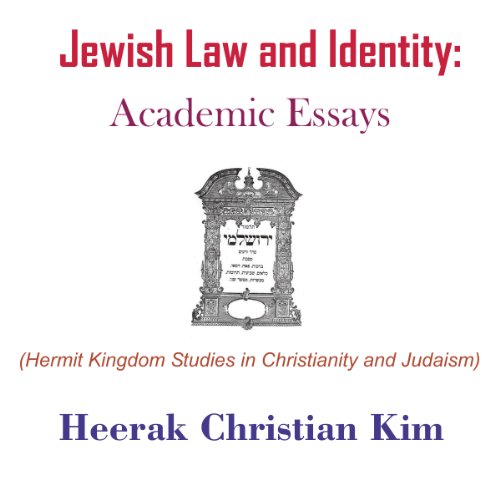 By: Heerak Christian Kim
Narrated by: Al Remington
Try for £0.00

Jewish Law and Identity is second in the Hermit Kingdom Studies in Christianity and Judaism, an academic monograph series in Hebrew, Jewish, and Early Christian Studies. This audiobook contains nine academic essays relating to the theme of Jewish law and identity.

Chapter one compares English contract law (Law of Privity of Contracts) with Jewish contract law, as found in the book of Genesis (the Abrahamic covenant). Chapters two and three discuss Jewish Rabbinic Law and its relevance for understanding Jewish identity in the period of the composition of the documents. Chapters four, five and seven discuss Jewish individual and group identity as found in the Old Testament, particularly in relation to the religious practice (Temple worship) and political institutions (the monarchy) of ancient Israel. Chapter six is a theoretical discussion for understanding identity in relation to rituals. The author proposes "the atomic theory," utilizing the scientific concept of the atom with nucleus and electrons, applied in a social-scientific and humanistic way to texts and social realities. Chapter eight discusses the book of Acts and its interaction with Jewish identity and the impact of the movement founded by Jesus of Nazareth. Chapter nine discusses Jewish identity as seen through the pseudepigraphic text of the Psalms of Solomon and its relevant for the late Second Temple period.

All the academic essays in the book discuss Jewish law and identity in a creative, and groundbreaking way in light of the most recent research trends. The essays represented here include important academic papers delivered at international conferences, like the Society of Biblical Literature International Meeting and the Australia and New Zealand Theological Society continental conference.

What listeners say about Jewish Law and Identity: Academic Essays

A lot of detail and argument beyond my interests. He uses different pronunciations that I am familiar with which made it hard to follow.