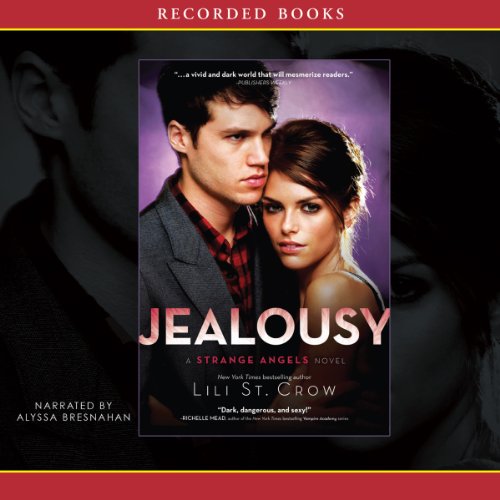 Lili St. Crow’s darkly exhilarating Strange Angels novels have won a devoted readership. In the third book of the series, Crow’s unusual heroine, Dru Anderson, has been through the ringer, what with a missing mother, her father turning all undead on her, and forces of evil that just won’t seem to let her be. On the run from a predator with a taste for her blood, Dru can count on help from Graves and Christophe—but they just might do more harm than good as they battle for her affections.

What listeners say about Jealousy

I usually prefer to read a book before I listen to it because I find it more difficult to pick up on the details if I don't. The reader made this book an exception for me. There was some difficulty because the author deals with flashbacks and the main character talks to herself at times. Without being able to see the text that gets a little confusing. Alyssa Bresnahan took St. Crow's awesome characters and really brought them to life.

Jealousy without Jealousy but kinda Jealous

I'm wondering where Lili St.Crow gets her title ideas. Just thougth I'd throw that out there... there wasn't as much jealousy as I'd expect in a book named as such... well there's some, but I've seen MUCH more jealousy elsewhere. Please don't make me bring up Twilight. Which is why I expected LOADS of jealousy from this book. Alas, it's just a teaser word.

I must admit I hesitated in getting this because the narrator had two strikes against her for poor reading. Surprisingly, she pulled through on this one, making me wonder what she was dealing with on the previous reads... no more awkward stops or random slow motion reading when a guy is talking. So just for shaping up I gave her her star back. Does this book deserve 4 stars? Maybe not... but it's a definite improvement on the first two which I rated 3 stars, so there ya go.

Jealousy kicked the story up a notch! I can see why it had to be a thrid novel but it should have really been the second. It was the kind of boost this story needed. Plenty of action, things explained, the other guy finally stayed hear the heroine instead of randomly showing up... I admit I was ready for a good old fashioned were-boy vs. vamp-boy fight for the girl but that tension was taken away and I have yet to decide whether I liked that direction or not. The book left something hanging and wrapped up too quickly, making you feel like you kinda got short changed, but the amount of info given more than made up for it.

If I DIDNT KNOW BETTER ID THINK THIS WAS A DIFFERENT NARRATOR!!! THIS BOOK MADE THE OTHER 2 WORTH LISTENING TO!!! SEE I KNEW THIS SERIES WAS AMAZING!!!