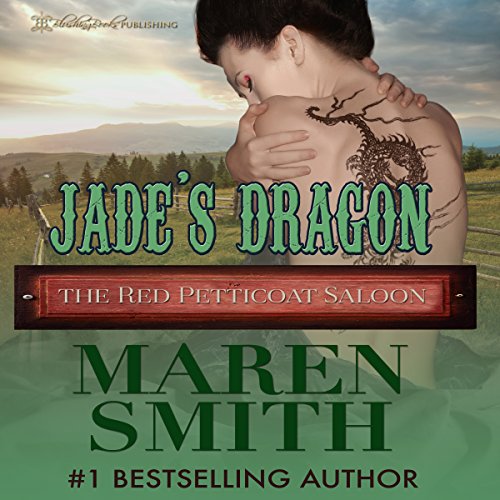 Cast out of China, Chin knows all about how hard life in a foreign country can be, especially for a woman on her own. Given the name Jade and a job packing in the crowd as an exotic dancer at the Red Petticoat, Chin thinks she's finally carved a safe and secure place for herself when, looking out across the dance hall, she spies the son of the man who murdered her family. Panicking, she flees into the night, into the worst storm in living memory.

Struggling on a failing ranch, neither Cullen Drake nor his brother Garrett has any idea how to combat the illness ravaging their herd. But the night Cullen finds himself slogging after sick cows during the worst storm in California's history, he happens to be in the right place at the right time. At first, he thinks it's a child he's rescued from a flashflood. It's not until he gets her home that he realizes Chin is every inch a woman grown...and a woman on the run.

Chin knows better than anyone the risks of staying too long in one place or letting people get too close. Yet the harder she tries to escape, the worse off she becomes until finally, sick and wounded, she finds herself unable to run. Her past is closing in, but Cullen has a past of his own and a fearsome determination to protect her, whether she wants him to or not. Having been a bad man once himself, he knows he can handle whatever - or whoever - has Chin so afraid. Unfortunately for her, he also knows how to handle young ladies more interested in running than behaving.

Disclaimer: This book contains the spanking of adult women and sexual scenes.

I liked that the characters were from different backgrounds. Chin's journey from China to America and the circumstances that brought her there made the story more interesting. I also liked that she wasn't judged or belittled for the choices she made in order to survive.

I liked all the suspenseful moments and the big fight near the end of the book which was quite amusing. I didn't like that Chin got spanked a lot but I liked the rest of the story and I would be interested in reading/listening to some other titles in the series.

I received a copy via audio book boom in return for an honest review.

I was given this book in exchange for an unbiased review via audiobook boom. This was a story that was filled with a few plot twists. I felt Jade's panic when she looked out and saw the son of the man who had run her out of the place she grew up in. The narrator did a good job with this and several other places. I am glad that a HEA was a part of the story although some of the sex scenes were not to my taste. All in all the writing was good the overall story was interesting to me.

I was provided this audiobook through Audiobook Boom at no charge by the author, publisher and/or narrator in exchange for an unbiased review.A good narration and an interesting story. Not a gritty bad boy romance but it does have explicit sexual situations and language. Resides around prostitution within a caring environment. The proprietors and girls form a type of family without digging into the darker side of the industry.
A bit predictable and the characters aren't all deeply developed but it's a fun, cohesive listen.

Yes I would, I really enjoyed this story it was so nicely written.

Chin what a little spit fire, never judge anyone by their size. I really enjoy books with strong female characters

Have you listened to any of Anthony Lee’s other performances before? How does this one compare?

No I haven`t, he did a great job narrating this book. Definitely will looking into more titles that Anthony has narrated.

A few parts did in fact make me laugh, it really was an enjoyable audiobook

This is my first book in the "Red Petticoat Saloon" series. The main characters in each of these books have gemstone names. This book features "Jade" (real name: Chin) who is of Chinese decent. Jade has a troubled past so when her past catches up with her she escapes and meets Cullen. Their relationship moves from uncertainty and distrust to hope and promise. A fun escape that is written well and narrated nicely.

Note: Please be advised....This book includes sexual encounters, adult conversations, and swearing. It also contains some "spankings" which some may find offensive.

I would like to thank the author, publisher, or narrator for providing me this review copy free of charge in exchange for my honest and unbiased review. :-)

Wonderful addition to a great series

Maren Smith is one of my favorite authors. She has once again written a well thought out story with realistic characters that you root for. Smart dialogue and an interesting story provided a real feeling for the times and different cultures. I also thought the narrator did a good job. I voluntarily reviewed this audio book which I received via audio boom

I bought this book, it was not received as a free gift from anyone and I totally enjoyed it. Yes it is a spanking romance and this is the first book I've read by this author but will definitely be buying more of her works.
I've read all of the Red Petticoat Saloon books and this one is a great addition.
This was the first book I've heard by Anthony Lee but he did a great job.

If you don't enjoy spanking (kink) romances, don't leave a negative scathing reviews as it says more about *you* than it does about the book.

I found this book interesting. This time in the west had been a time of great change when Chinese people poured like rice wine into CA. Many would later resent and hate it but for this story set obviously before for that we find a girl name Jade, on the run from would be executioners. Tiny and often mistaken for a child all she wants to do is become lost in the world so that she can find peace from her pursuers. She lands in the Red petticoat Saloon sick and desperate for a job. Through shear determination she gets one. What follows is her race to get away from it once her pursuer shows up. Good story a little heavy handed. Pun is intended as they are forever spanking the crap out of her. Even I wanted to squirm. I received this book free of charge in order to give an honest review.


I've not listened to any other books in this Western Historical Romance fiction series. There were things that I enjoyed a lot, and other things I found uncomfortable listening to. I might try another in the series before I totally make up my mind.

The narration was well done.The characters were well portrayed.I enjoyed the voicing.

Chin, the female lead, is running from her problems.

Cullen, the male lead, is having a few problems of his own on his ranch, especially when Chin runs straight into of Cullen's life.

The story line is centered on misunderstandings and secrets.

** I missed the disclaimer before requesting this book:
"This book contains the spanking of adult women and sexual scenes." **

This sentence was in the book description:
"Unfortunately for her, he also knows how to handle young ladies more interested in running than behaving."
Really? The female lead needs to behave as if she is an unruly child or new pet?

The story line was interesting and that's what drew me in, and, if the spanking scenes would have been omitted, I would have rated this book higher.


Anthony Lee did ok with the narration he needed a little more energy for the different characters.