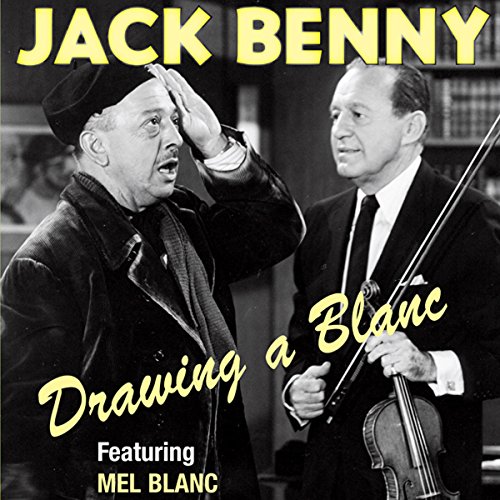 "Train leaving on track five for Anaheim, Azusa, and Cuc-amonga!"

A woebegone old car, a harried department store clerk, a monosyllabic man in a sombrero, and a train announcer whose line ran somewhere between Orange County and the Twilight Zone are all memorable characters from The Jack Benny Program, and all the products of a single talented throat: Mel Blanc.

"The Man of a Thousand Voices" was Carmichael the Polar Bear, who lived improbably in Jack's cellar. He was Professor LeBlanc, Jack's violin teacher, whose French accent seemed to mimic every wail of his pupil's tortured strings. He was Polly the Parrot, Jack's impudent bird, who was less interested in crackers than in putting his master in his place.

What listeners say about Jack Benny: Drawing a Blanc

Jack Benny do a wonderful job. Jack Benny and his team did a great job on this radio show. Mel Blanc Who who voiced Bugs Bunny and Woody Woodpecker and other cartoon characters does a fantastic job on this show. My only complaint is that I had to listen to bunch of horrible cigarette commercials. Did anybody on the show by making cigarettes and tobacco sound like fun, ever think of all those people who listened to them, and smoked, and then died of cancer. Thank god we don’t have cigarettes commercials anymore.

Would you consider the audio edition of Jack Benny: Drawing a Blanc to be better than the print version?

What was one of the most memorable moments of Jack Benny: Drawing a Blanc?

Learning that Dennis Day had that wide range of voices. He was wonderful.