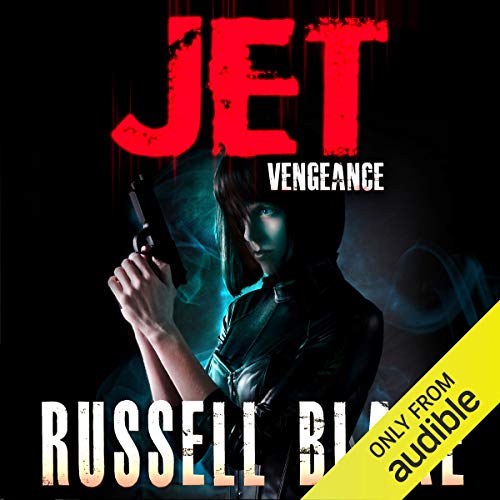 Jet III: Vengeance finds Jet settled down, trying to return to a somewhat normal life of stability and safety. But fate has other plans for her when she becomes embroiled in a terrifying terrorism plot involving figures from her past, whose thirst for revenge forces her back into the kill-or-be-killed world she'd hoped to have put behind her forever.

What listeners say about JET III

Jet tries to settle down with her daughter where no one can find them but the Russian Mob tries to kill her. With the help of Allan, her dead husband’s brother who is also a Mossad agent, she hides Hannah and then goes after the mob who tried to kill her. The story also takes a side step into the Middle East and its varied problems.

The book is well written, fast paced and action packed. I enjoy the fact that Blake provides the name and details of the various weapons used. The suspense kept me on the edge of my chair. The ending is a cliff hanger so I cannot wait to read the next book. If you are thinking of reading this series be aware it must be read in order.

Braden Wright does a good job narrating the book. Wright is an actor, writer and audiobook narrator.

Would you consider the audio edition of JET III to be better than the print version?

YES, COULD NOT STOP LISTENING

This Jet audiobook was as good or better than the others. Never a dull moment with the most ass-kicking female hero in fiction.

I love the JET series! JET was the code name of the all-time top Mossad agent before she retired. She is now interested in raising her 30 month old daughter in safety, but her enemies track her down. The enemy this time is a Russian gangster whose dad she killed. There are several cases going on at once in this book. JET teams up with a male Mossad agent. The narration is really, really good. HIGHLY RECOMMENDED.

I'm listening to this series in order. Love the take no prisoners Jet. If there was an action figure of her it would be on me desk. The writing skill of this author is off the charts and, along with the narrator's sexy voice, they keep me coming back for more.

I love the Jet series

JET 3 is no exception. A gripping story, engaging characters, and fantastic narration. It doesn't get much better than this.

Braden does an excellent job with the characters. I think he really enhances the narration!

This was a great story, lots of Action. I do wish it was narrated by a woman since the main character is a woman. But it is ok.

I love these Jet novels. I'm sure that they are a bit too violent for some.

Enjoyable even if predictable

I listened to the first two books and had to get this one too. It was enjoyable, but a bit predictable. However, it's worth the listen just to continue the story.

Not as good as the first two

SPOILERS: This one frustrated me a bit. The plot was pretty simple and expected. I like my heroes to also have a human aspect and Jet is a super hero that can survive anything without much trouble. Her final showdown with the villain was anticlimactic and I felt her choices were not what you'd expect from a female super spy. Did she really put her weapon down to fist fight because he called her chicken. I'm also starting to get tired of a different love affair every book. You'd think someone who lives this type of life and experienced the abuse she did as a child would be a little more guarded when it comes to men. All in all I won't give up on Jet. I still devour these books but I'm worried they are losing steam and it's only book 3. The first two books she was more of a realistic character (with the exception of jeopardizing her mission to save one child in a city full of child sex slaves). Now she is becoming a bit unbelievable. Without some intense struggles and more natural mistakes I'm not sure I'll enjoy the rest of the series.