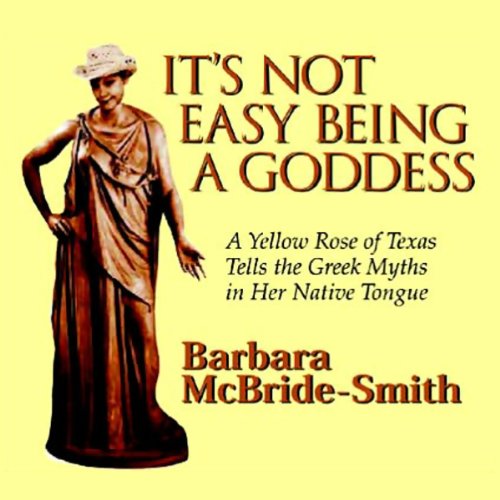 Storyteller McBride-Smith delivers witty versions of Greek myths, mostly ones that relate to goddesses, in a clear, plain Southwest accent and delightful Texas twang. She spins the tales of Demeter, Persephone, Athena, and Medusa with Texas style. Remarkably expressive, she vocalizes her work in a distinctive comic style.

Award-winning storyteller Barbara McBride-Smith breathes life (albeit a wizened Texan version) into the old Greek myths. With her incurable Texas drawl, she spins the Greek myths as you've never heard them before, rendering them 99% more fun while retaining 100% of their original insights into the crooked ways of the human heart and the no less crooked ways of the ancient Greek gods.

"Pandora":
According to the Greeks, she was the first woman created. Her finest gift from Zeus was curiosity. Her most precious gift to mankind was hope.

"Demeter and Persephone":
Demeter, the goddess of growing things, tells how her daughter was kidnapped by Hades, the god of the underworld. Because of Demeter's power over nature, Hades is forced to return Persephone to her mother, but only for half of each year.

"Judgment of Paris":
Paris, a Trojan prince predicted to be Least Likely to Succeed by an oracle, judges a beauty contest and decides who is the fairest of three goddesses: Hera, Athena, or Aphrodite. In the end, he discovers what baaad could happen!

"Medusa":
When Athena's temple is defiled, she takes her revenge on Medusa, a beautiful young woman, and turns her into the ugliest monster in Greek mythology.

Light entertainment, Greek mythology told from a deep south comedienne's point of view.
Performance was good and was very entertaining. Only downside was it could have been longer or included a few more stories.

Fun approach to mythology but I got tired of the cuteness. I did listen to the whole thing, however.

This was a very enjoyable listen. The characters really come alive with the authors style and words. It is an excellent way to relearn some of the Greek myths.

Would you listen to It's Not Easy Being a Goddess again? Why?

Would you recommend It's Not Easy Being a Goddess to your friends? Why or why not?

Yes I would because it is a very interesting view of greek mythology.

Have you listened to any of Barbara McBride-Smith’s other performances before? How does this one compare?

No I have not