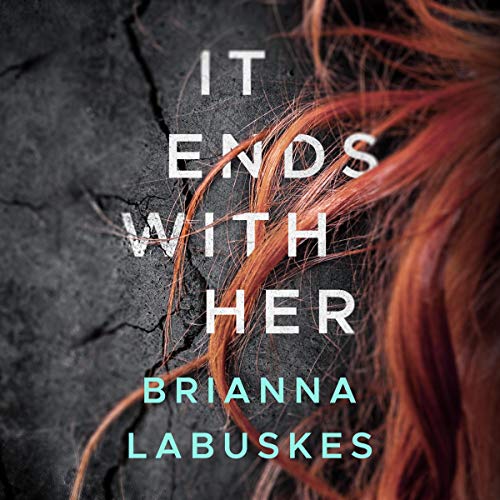 It Ends With Her

By: Brianna Labuskes
Narrated by: Lauren Ezzo
Try for £0.00

He started the game. She’ll end it.

FBI special agent Clarke Sinclair doesn’t give up easily. She’s spent years tracking serial killer Simon Cross, forced to follow his twisted clues and photographs across the country. Clarke knows that Cross selects only redheaded women and that he doesn’t target another victim until Clarke discovers the previous one.

A girl has already gone missing in upstate New York when a second one is kidnapped - a blonde. The killer’s MO has changed, sending Clarke back to the drawing board. The closer she gets to the truth, the deeper she’s drawn into an inescapable trap made just for Clarke. Whatever Cross’s ultimate game is, it ends with her.

What listeners say about It Ends With Her

While it was a page turner and an easy read, the story was dramatically overwrought. If damaged cops, self doubting women, and perfect villains are your thing, you’ll love this book.

It ends with her

Annoying narration plus too much sexual explicit words. Really not my type of story line.

There are several issues with this story, primary among them is the incredibly unstable personality of the female FBI agent. I almost quit listening and would have if I weren’t busy with a project and needed a story to listen to while my hands were busy creating.
The FBI would never recruit someone as mentally and emotionally unstable as this character is portrayed.
Additionally, the narrator doesn’t insert pauses or give any indication when the story is switching time frames. Makes for some confusing listening in a few spots, until you realize the story has flashed back a decade or two. I’m certain on paper there are page breaks. Well, there needs to be narration breaks too.
Finally, it’s a bit annoying to listen to a story that was probably released months earlier than anticipated. It’s May 2018. The dates in the story, written in past tense, refer mostly to July 2018. Minor annoyance.
I picked this up using Kindle Unlimited read and listen for free program. For free it’s just ok. Glad I didn’t pay for it.

It may just be my issue, but I did not like Lauren Ezzo's dramatic monotone narrating style. As for the novel, there were no likable characters; nor were there characters that behaved in a rational manner. The location and time changed constantly without warning or notification (likely a narrator issue).

Such a great book!

I really enjoyed this! I had my Audible on in my car each day and found myself circling the block to keep listening...It has a mass of twists and turns that I wasn't expecting. I felt bad for Clarke because it seems as though her entire life revolved around this sociopath. The way she takes her pain out on herself is just so sad. She is such an emotionally tortured woman.
I also loved Sam. the fact that he stayed and put up with Clarke speaks of the kind of person he is. He is so level headed.
Simon ....ugh Simon is purely evil.
This is quite the thriller ...I highly recommend.

It was a pretty good book...

I almost just quit this book but the story was good enough to keep going. The narrator’s voice grated on me the whole time. I will make a note of her name and never ever get another book that she reads. Her voice sounded like she was near tears and so dang dramatic the whole time. Ugh!! She couldn’t seem to read the non-speaking parts without that whiney voice of hers. Even recalling it makes me cringe. Be sure to listen closely when you sample the audio book and decide if you can listen to that for hours.

For at least the first half of the book I was listening then going back to re-listen. I think this book could have used an introduction to the characters or some explanation of how the book was set up. Although the author does wrap it all up for the end of the book, I found the format confusing.
The amount of explicit violent sex acts and rapes were difficult for me as a survivor of domestic violence and rape. Maybe a spoiler alert? All in All it was a pretty good mystery and the narrator was excellent. I do find myself reluctant to read other books by this author or to recommend this one.

This book was full of twists that kept me guessing until the end. The audio was clear and easy to listen to

This was an okay story. It was pretty predictable, but it was fast paced which I enjoyed. I don't typically read books with the detective/cop character, and this book reminded me why.

Great story with a few twists. Characters come to life with narration! Emotional, suspenseful, and satisfying.