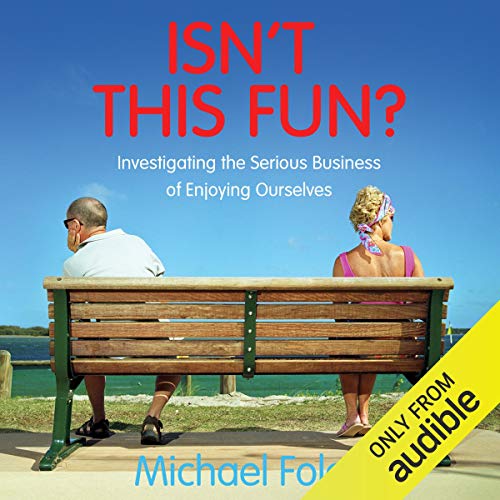 By: Michael Foley
Narrated by: John O'Mahony
Try for £0.00

Michael Foley wants to understand why he doesn't appear to be experiencing as much fun as everyone else. So, with characteristic wit and humour, he sets out to understand what fun really means, examining its heritage, its cultural significance and the various activities we associate with fun.

He investigates pursuits such as dancing, sex, holidays, sport, gaming and comedy and concludes that fun is not easy, simple and fixed, as many seem to believe, but elusive, complex and constantly changing. In fact fun is a profoundly serious business - a range of new group rituals evolving in response to cultural developments, often motivated as much by spirituality as hedonism. Also, while fun is a modern phenomenon, it turns out to have re-created many of the elements of early ritual.

His findings will invigorate you with insights, make you laugh at life and quite possibly help you to understand why the post-postmodern is actually the pre-premodern.

Michael Foley was born in Derry, Northern Ireland, but has lived most of his adult life in London, working for 23 years as a lecturer in information technology at the University of Westminster before retiring in 2007 to concentrate on full-time writing. He has published critically acclaimed poetry, novels and nonfiction, including New and Selected Poems (Blackstaff Press, 2011). His first nonfiction book, The Age of Absurdity (Simon & Schuster, 2010), was a best seller and has been translated into seven languages.

What listeners say about Isn't This Fun

It's not often an author is so thought provoking, effortlessly eloquent and funny at the same time. A future classic and one that I will revisit as there are so many great quotes that resonate. "Examine anything and you illuminate everything ". Loved it.

Not quite ''The Age of Absurdity''

Foley's skill to approach very ordinary experiences and values from a very different angle, leading the reader to re-think some basic issues of modern Western life.

What does John O'Mahony bring to the story that you wouldn’t experience if you had only read the book?

Well read. The reader's voice expresses the nuances of the contents, making it easy and enjoyable to listen to the book.