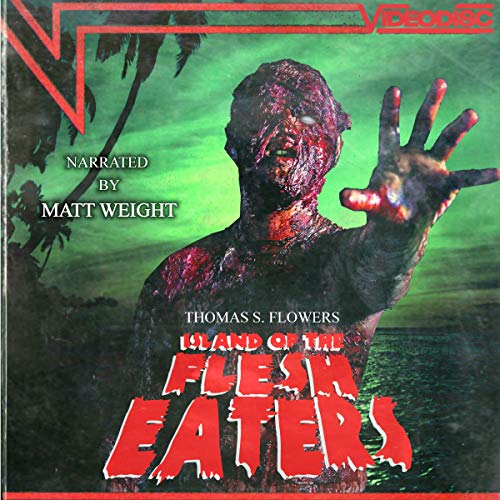 Houston, Texas, 1985: While investigating the affluent and seedy Gasper family, Rachel Hawkins, a junior reporter with the Galveston Daily News, stumbles upon a story that will make her career.

Billy Gasper, son to the billionaire tycoon Gasper family, is missing. His yacht found near the Port of Galveston, abandoned all but for a seemingly deranged captain. Where are the crew? And where is Billy?

Meanwhile, while searching for his missing sister who was last seen with her boyfriend Billy Gasper, RadioShack manager Mark joins an ex-military security team hired by Mr. Gasper to find his son. Hidden away, Hawkins joins Mark and the hired goons as they race across the Gulf of Mexico to a private tropical island resort.

All attempts at radio communicate with the island have failed. Its as if the entire resort with hundreds of vacationers and staff have disappeared.

What is really going on? And what will the rescue team find when they get there?

For fans who love Lucio Fulci's Zombie and Bruno Mattei's Hell of the Living Dead comes...Island of the Flesh Eaters!

This story starts off with a nice homage to Lucio Fulci’s Zombi 2. It reimagines one of the many memorable scenes from that movie and if you haven’t seen it yet, it is worth a watch. The rest of the story is not ground breaking by any means, but is a solid rescue mission to a zombie filled island. Definitely was written as a nod to some of the older Italian zombie films. As this is just under three hours, it is fast paced and is full throttle from start to end.

The overall plot is fairly familiar, people go missing, elite squad is hired to look into it, zombies attack, lots of people die. The part that made this unique was that it was set back in the 80’s. 80’s horror is a warm blanket on a cold night for me. There are a lot of nuggets you have to carefully listen for that set the stage for this taking place in 1985. Properly establishing a world from a different time can be difficult to pull off properly in such a short book. Many of the aspects needed to clearly depict a world that is 35 years ago would clutter a novella. I would have loved to get more of a feeling of being back in 1985, however, given the genre and how short it was I fully applaud Flowers’ effort. I have yet to be disappointed by a story from Flowers and this one is no different.

The characters are a lot of fun and while they are an unlikely group of people to complete the task, they fit the typical gang of people to try. I would say you get some of the feel of the timeline by how the characters are portrayed. I liked how Hawkins was a gung-ho journalist just trying to make her way in a male dominated field. Hawkins and Mark are the most developed of the characters and their role is what really drives the overall story. I really think their story could have been expanded upon and would have been happy to listen to a story two or three times as long.

Matt Weight did a good job narrating. I enjoyed his voice and the energy he put into the characters. The different character voices were paired perfectly for how I pictured each one. The way he pronounced exhaled was probably just a different regional dialect than I am used to, but it threw me off each time I heard it and for some reason everyone was exhaling. Nothing too bad but for me it was the tiny scratch on a polished Ferrari.

The cover is fantastic. It perfectly sets the tone for the story.

This one was just as fun as I expected! Though, I do expect a lot from Thomas S. Flowers, and he did not disappoint here. This campy homage to our favorite 80's zombie flicks was amusing and thrilling from top to bottom. Matt Weight delivers a good performance that gives the story life. I would recommend this one to any friends who enjoy a zombie story!

Here we have a somewhat gruesome, yet typical zombie tale. All contact is lost with a group of young adults on holiday at a Caribbean Island resort. A Special Forces team is hired to investigate. What they find on the island is much more than they bargained for. Will they find the party goers? If so, will they get off the island alive? And what will they find when they get home, if they get home? Not a bad tale, just short. This audiobook was given by the author, narrator, or publisher at no cost in exchange for an unbiased review via Audiobook Boom.

Loved this book! Starts off with action , has action all the way through and even ends with action! listened to book in one setting just couldn't put it down. The only bad thing about this book!!! It ended way to soon for me! The narrator did a fantastic job bringing the characters to life and getting you vested in them. Great zombie book for your collection!!!

If need a quick zombies book this is for you. It is full typical zombie gore and guts with good characters. Mr. Gasper hires team to find his son Billy, Mark joins them in search of his sister and Rachel also tags along hoping for good story to report, then action takes place. Felt sorry for Gasper as he finally meets up with Billy. Author writes quite of variety of books including horror, supernatural and Post-Apocalyptic, recommend checking them out. I was given this free review copy audiobook at my request and have voluntarily left this review. Thank you

Pretty decent zombie story. I liked that the story was based in the 80s. I liked the narrator's performance. I received this audio book through Audiobook Boom for free for my unbiased review.

I want to start out by thanking Thomas S. Flowers for the awesome homage to the Great Lucio Fulci. The opening scene was wondrous in its ability to bring back warm and fuzzy feelings for a bygone era when zombies were creepy and scary and not the daily fare they are today. When an author or director actually had something to say and the stories were dripping with satire and innuendo.

The story here is very fast paced and fits a lot of action into a small package. The characters of Mark and Hawkins are likable while the mercenaries are all gruff and disposable. It nailed the 80s very well. Pretty graphic but it is about flesh eaters. Still okay for my 6 year old to enjoy it with me. I highly recommend this to anyone looking for a short trip down nostalgia lane.

The narration was done pretty well. My only negative was that he pronounces Exhale like Exzale. This also accentuates how often the word is used in the story.

I received a free promotional copy of this audiobook and I am leaving a fare and honest review.

This was a short but enjoyable zombie apocalypse story. Very much had that Romero feel to it, which was great. There is nothing original here, but it is at least well executed. The narration is good. All in all, a great listen if you want something to kill a couple hours with.

Satisfies the craving for a cheesy zombie snack..

When I was a young person growing up in the 70s and early 80s, weekend television would typically cheesy horror movies that had exactly the same look, feel, and taste as "Island of the Flesh Eaters". They weren't Oscar-winning shows, nor were they intended to be. They were formulaic and predictable, but they were still lots of fun to watch. This audiobook took me right back to those times (thanks, in part, to a lot of familiar culture references from the 80s). It's the perfect length for this type of story. The narrator was good, except I increased the playback speed to suit my preferences.