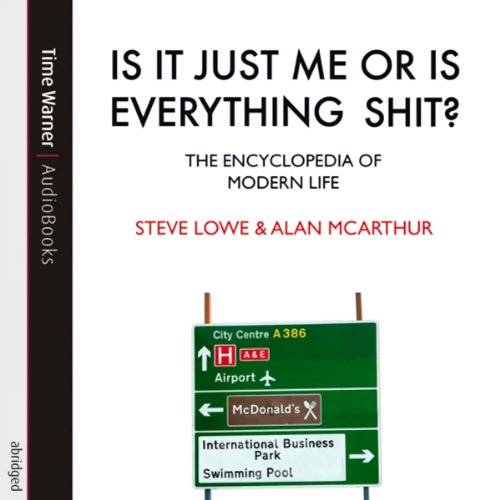 Is It Just Me or Is Everything Shit?

If you hate loft living, bar-clubs, Tony Blair, chick lit, global warming sceptics, Keane, loyalty cards, IKEA, Kabbalah, bling, and Richard Curtis...then you need Is It Just Me or Is Everything Shit?, an encyclopaedic attack on modern culture and the standard reference work for everyone who believes everything is shit. Which it is. This audiobook is for the large percentage of the population interested in saying NO to the phoney ideas, cretinous people, useless products and doublespeak that increasingly dominate our lives. It is designed for everyone who thinks they may have mislaid their soul in a Coffee Republic. Never before has there been a book so completely full of shit. This very funny, well-informed, belligerent rant adds up to an excoriating broadside against consumer capitalism that the authors hope will sell loads of copies.

Read by the stars of Channel 4's Green Wing.

What listeners say about Is It Just Me or Is Everything Shit?

This is a disappointment. Easy shots with a few so so risky 'fucks' and 'cunts' thrown in just to try and prove that they are not just what in fact they are, tame middle-class 'radicals' who think that attacking easy establishment targets makes them right-on and cutting-edge...just boring crap I'm afraid and not in the least funny...no laughs at all, just an embarassment.

This was a nice listen to. Nothing fantastic but did make me laugh a number of times. If you like 'Grumpy Old Men' then this will be the type of thing that you should like. Yes lots of swearing but I liked it, well placed im my opinion. It seems that the people reading the book are the 2 guys from Green Wing. This is not going to win any prizes for book of the decade but I would recommend it.

Just listening to the Play Sample was enough for me. It reminded me of a bad Rik Mayall script from Bottom. I think this Book could have been amusing if tackled intelligently.

This book certainly is

I'll give it one star for the title, which summarises the quality of this book.