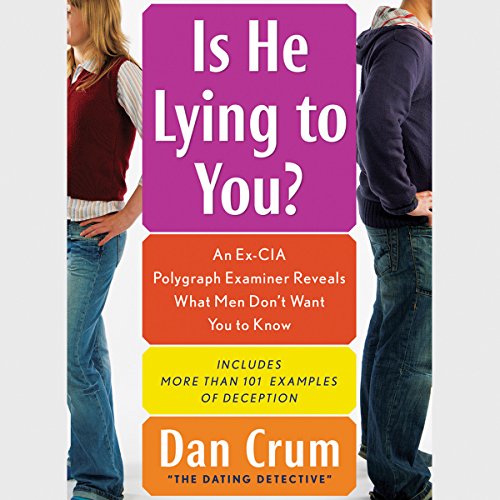 Is He Lying to You?

Is he lying to you? According to recent statistics, he probably is. Far too many women have been lied to, betrayed, deceived, and disappointed by dates, boyfriends, fiancés, and husbands.

Dan Crum is a former CIA polygraph examiner and investigator who became concerned after hearing women's frustration about how they'd been taken advantage of again and again. So he developed a series of strategies for detecting deception that any woman can use.

Is He Lying to You? is an in-depth course in the same tactics Crum used in the CIA. Now you can date...and investigate. You will quickly learn:

"Dan Crum provides a unique and provocative insight into the minds of men and what they don't want you to know." (Barry McManus, CIA Chief Polygraph Examiner and Interrogator (Ret.))

What listeners say about Is He Lying to You?

Not for an audio book

What would have made Is He Lying to You? better?

if it were adapted for an audio book

Would you ever listen to anything by Dan Crum again?

it might have contained good contents but for an audio book it was horrible .. referring to chapters means I have to get the actual book .. and most of all .. all the websites and links the narrator mentioned are not working or do no exist .. and he keeps referring back to them almost every half an hour .. so it was a waste of money .. get the book .. the audio one is rubbish

Flawed but not useless

There's enough perceptive, useful information in this book to keep me listening despite the author's unending, heavy-handed plugs for himself and his products. He should have complied when his editor told him to prune out all the plugs. (If his editor didn't tell him--repeatedly!--to prune them all out, he needs a different editor.) The biggest problem with them is that it's distracting to have the writer keep switching character between credible-professional-explaining-an-important-subject to self-serving-snake-oil-salesman-pushing-his-wares.

The reader did well, not exactly undercutting the author's moments of preachiness, salesmanship, and condescension, but not emphasizing them, and conveying the actual meat of the content straightforwardly.

My impression is that the author does know his subject, that he has worthwhile things to say, and that he is capable of saying them clearly. I'm not sorry I bought this, but I'm not sure I could recommend it, and I'd be reluctant to buy anything more by this author. (Maybe the plugs and the author's moments of preachiness and condescension are less troublesome in a print book where it's probably easier to skim over them.)

I am better armed in detecting deception