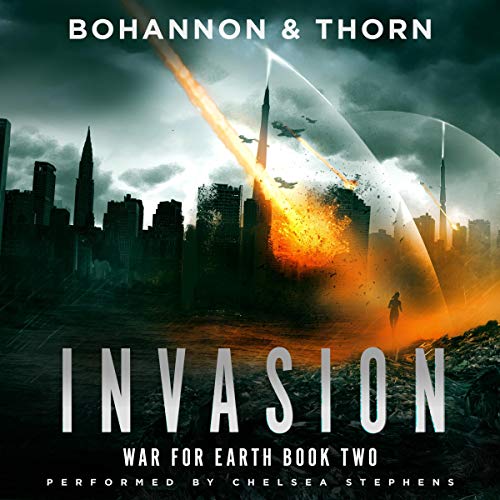 By: J. Thorn,Zach Bohannon
Narrated by: Chelsea Stephens
Try for £0.00

We never saw it coming. The Invasion has begun.

With the world in chaos and the aliens swarming the domed city of Nashville, Maya Talbot continues on her quest to find her children while destruction rains down from above - the aliens have arrived and the invasion has begun. With a crew of unlikely allies and a mother's incredible determination, she must find her kids and get to safety before it's too late. But what if Maya can't outrun the alien invaders, and what if there isn't anywhere left for the survivors to hide? The race is on and the clock is ticking because the aliens seem bent on annihilating the human race and destroying the planet.

Invasion is the new post-apocalyptic thriller from best-selling authors J. Thorn and Zach Bohannon, and the second book in the War for Earth trilogy.

So fast and exciting!

So good! I finished it far too fast and sadly I cannot find the next one in this series.... I want the next one asap rfn please.lol!

The narrator was the highlight of the book.
The military characters were so sterotyped and poorly written/researched, as to make the book unfinishable.