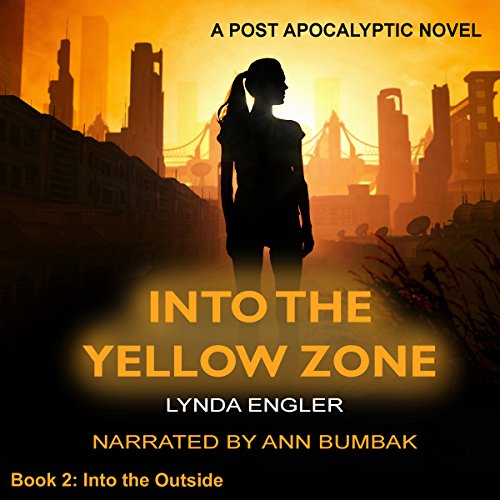 After leaving her underground shelter with a passing mutant tribe, 16-year-old Isabella, her new husband Malcolm, two young tribe members, and two little children, seek the old scientist Telemark village's priestess saw in her visions. Is he looking for a vaccine to keep humans from suffering the ravages of their poisoned world? Or are Araddea's visions merely hallucinations born of her mutated mind?

Meanwhile Isabella's brother, Luke, is desperately trying to find them to deliver medication that can save them from a disease they don't even know they have. But Luke isn't just delivering meds...he has escaped the military base with knowledge of a government plan that will help clean up their toxic and irradiated world, but at what cost to mutants?

What listeners say about Into the Yellow Zone

I received this book via a promo code and this is my honest voluntary review.

Book 2 in the Into The Outside Series. Narration is considerably better in this version than book one, thankfully.

50 years after the retreating of civilisation to underground shelters, Isabella and her new mutant husband Malcolm are on a journey to find a scientist who could possibly make a vaccine to protect humanity and to continue spreading the word about the Governments plan to use the mutant tribes as slave labor on the surface to clean up the wastelands. Overall a passable post-apocalyptic story but even for fiction the idea that the New Mutants reach maturity to have kids at like 11 years old and die by 23 was a stretch too far. Language, development and the idea that the uptop world turns into a bunch of aboriginis in less than 50 years... even in prehistoric times humans lived until their mid 30s and early 40s.. they had to so their offspring could mature and learn enough to survive etc.

With the change in narrator, I feel that there are been a marked improvement. This narrator really suits this story and she brought out the characters to their full potential and gave the book more of an adult feel.

In this book we follow the characters further into the post nuclear wasteland. The world the author has created develops as does the characters.

A Good (And Slightly Terrifying) Story!

Well written and performed story with good character development. The setting is terrifyingly believable, as well as the story line. If you like your dystopian adventures to have action, adventure, and wholesome values vs gratuitous violence and graphic romance, then this is the story for you. I look forward to reading the next Into the Outside book and finding out what happens next!

The story continues with Isabella/Bell/Izzy and her family, both the mutant (New Human) one and her family left behind in the bunker. The pace really picked up in this book and the narrator was excellent - onto the next!

A Race Against Time

The story continues at a pace as Isabella and her tribe of mutants forge ahead, guided by the predictions foretold to them. They visit the old professor who has spent 50 years in his isolated laboratory searching for a cure for the damage the pollution is causing the humans. The tribe continue their journey. Luke, escaped from the military base, tries to catch-up with his sister Isabella. He visits the professor but Isabella has already gone. The professor makes a breakthrough in his research and joins Luke to follow Isabella and her tribe. An exciting listen with great narration. The characters have filled out and the threads are starting to converge.

Into the yellow zone

This is a very intriguing story. I have not listen to the first book. However, I was still able to enjoy this story. The story and narration was perfect and exactly how I imagined.

I have to say that book two is better then book one, things move a little more quickly with some action. This book refreshed our memory in what happened in book one and also the characters I found are a lot more developed.
I would recommend this series.
I liked the narrator, I thought she did really well in voicing the characters.

Get better or get dead.

Fifty years after the one day Terror War that rained down both nuclear and chemical weapons killing most of the world's population, the survivors are divided into 'humans' who lived in sheltered accomodation, and the Outsiders, who, because of genetic abnormalities, were also known as 'mutants' - their lives were mostly short. Isobel had grown up in her family's underground shelter but left and married Malcolm, an Outsider. Reading for her life and with terrible news about what the army intends for the mutants, Isobel's brother Luke heads out to look for her.

This is the second book in a trilogy and, although it would probably add to the understanding of the characters, it is not necessary to have read book one, Into the Outside, as a brief but helpful synopsis prologue brings the reader up to date. The story is a gentle one and, despite horrors and confrontations, there &quot;was still joy to be found.&quot; Well written, with good characterisations of the easy to like protagonists, the story switches with alternating chapters between the journeys of Luke and his sister.
Ann Bumback's narration is, in tune with the whole book, a pleasant one, soft, warm and slow, well developed for the different voices, though sometimes lacking intonation in the connecting text. Overall, however, the reading fits the text well.

An enjoyable listen with likable characters and, although there is tension, not as fraught and dark as many post apocalyptic stories. There is still hope. I look forward to the third and final book, Under the Mountain.

I received this book for an honest review.

after the series of events in the first book, this was one good development through all the settings and things that are happening to all of them.

in this one we are introduce to Luke, Isabella cousin brother, that after lots of deliberation embarks on a journey of his own to warn her about the government plans.

it was pretty good actually, to see how much they are growing in this ordeal of a life trying to achieve happiness and to succeed in their endeavors.

a good read for dystopian and scifi lovers.

I felt this book was better than the first and the characters were becoming more realistic. it still isn't up to a 4 star level for me though. I wish they would let you do half stars.

Isabelle and her group is still traveling on their way, meanwhile her bother Luke is trying to find a way out of his lock-down so he can get back to finding her and getting her the medicine her thinks Isabelle needs. Will they ever catch up to each other?

This has been such a awesome series so far, the action level is still high and the suspense is thick. The characters are wonderful and they all work so well with each other. The author along with the narrator paint the scene for the reader/listener so well you fell like you are there with Luke and Isabelle. It is so real in the audio version sometimes you think you actually hear birds. This is a really good series and not one that should be overlooked.

I am really enjoying the 2nd book in the series. There is so much I want to say but don't want to spoil the story. Worth it to listen to. Such a good story.

Out of the Frying Pan and Into the Fire

I was given this free review copy audiobook at my request and have voluntarily left this review. This review is for the audio copy of Into the Yellow Zone: Into the Outside, Book 2 by Lynda Engler, and narrated by Ann Bumbak. This is book 2 of 3 and continues to be a good story. It is keeping true to the story line, and character development is consistent. Ann Bumbak did a great job taking over the story telling. I am enjoying the story and look forward to listening to book 3.

A Family Stays Together

I really enjoyed this post-apocalyptic tale of a blended family's struggle to survive in a brutal and still highly prejudiced world. This is the second book in the series and tells the story of Isabella and Malcolm's journey into the countryside to warn the mutants of a sinister plan by the government to destroy them.
Meanwhile, unbeknownst to them, Isabella's brother follows behind them, searching for his sister.
They all encounter threats, both human and environmental but also meet survivors who will help to restore your faith in the innate goodness of the world - along with some who definitely won't.
An grim, but interesting middle book in the series.

Mutants versus the government!

This series is so good. You will not be bored. The story focuses on Isabella and her family's travels to warn other humans/mutants of the government's sinister plan. The story also focuses on Isabella's cousin brother Luke who is always one step behind in catching up to her. I cant wait to read book 3 to see how everyone reunites and what the outcome will be. The narrator does a great job with all the different voices and you forget it's just one narrator. The story flows along without excess fluff.

Let me start by saying I did not listen to the first book in this series. I had no trouble getting into this story and very quickly figuring out the relationships between the characters.

I found the storyline interesting and engaging. The narration also held my interest. Definitely worth checking out the rest of the series.

If you could sum up Into the Yellow Zone in three words, what would they be?

Isabella's continuing desire to not only fit in with her new companions, but to help make their lives better also.

When Isabella get's through to the young female guard and makes her see the "mutants" as humans.

She's been sheltered her whole life; it's time she experienced the real world.

I enjoyed the continuing story about Isabella, Luke, Malcolm and all the rest. I can't wait to listen to the next book.

I liked the first book, but this one I enjoyed. Luke has a knack for getting into trouble and that leads to some interesting turns. I requested this audiobook and received it free of charge, I also agreed to leave a review.