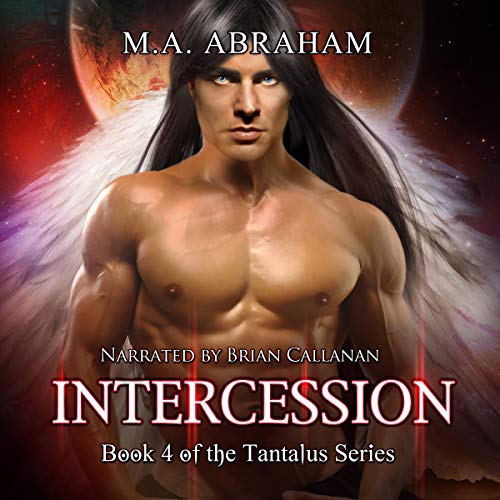 The Tribunal Elder has lived through more millenniums than he cares to think about. He is not the type to shirk his duties. He is a force to reckon with; yet he is known to be a kind man. To settle a dispute between the Martians and the Human, he will travel to Mars. Before he returns home, this problem will be settled, one way or another.

The message from the Martians is clear: remove the settlers from the surface of their planet, or they will die. The Tribunal Elder soon discovers there is more to this than those who are in command know about, for the act that precipitated this action had multiple events. Someone is working in the background, manipulating forces, to create a power struggle between the two species.

Will he allow the Tantalarians to be pulled into a conflict that they have and want nothing to do with?

What listeners say about Intercession

Intercession, the fourth book in the Tantalus series is brilliant, with a great plot and captivating characters. In this installment, we get to meet the Martians, and they are not tolerant. The Elders will play a significant role in finding a possible peaceful resolution.

M.A. Abraham is an exceptional sci-fi romance writer, with the ability to create a complex world with an alien culture. What's more, she focuses on the plot, characters, and outcome, rather than the sensual scenes. The romance is compelling but not explicit, both violence and profanity are also limited. Brian Callahan's performance was utterly amazing. I absolutely love his strong clear and smooth voice.

The Tribunal Elder to the rescue 😇

M.A. Abraham is someone that I found this year and I am a bit upset with myself that it took me that long to find her works. I have only read this series but I have to admit that I am hooked on it. There are so many layers that goes on within her worlds and I am sucked right in.

This book was a bit different then the previous three. I was not expecting this book to be dark but there were moments where I did not expect the death and just the crazy to happen. We also got to see more characters that will play a part in the upcoming books. I loved the ending of this book but M.A. is known for her cliffhangers and this book did not disappoint.

I think I am also in love with the Tribunal Elder. He is a wonderful character and is a sucker for all the women in his life. I want to see him happy and I am excited to see if he finds another mate or if he is destined to be the savor for everyone.

What an awesome story!!

This author has a wonderful imagination that I could only dream of having! I have to say this is a must read book. The book has suspense, romance ,intrigue, murder and aliens what more can you ask for? An absolutely fabulous book and this series of stories has me coming back for more!
I very much enjoyed the narrator of these wonderful story as well. Brian does a superb job!
I loved this book!

This is the fourth book I have read/listened to by this author and I am loving every book in this series. Although this is a new story thread- the threat of the Witch hunter is over- it would be helpful to listen to previous books first, but not completely necessary. Many things are expanded upon in this book. We learn more about the Tantalarian history, reasons for their social structure, and the role of the Elder
We finally get to meet the inhabitants of Mars! The Martians have given the Tantalarians an ultimatum, and do not seem to be cooperative. The tribunal elder takes Humans and Tantalarians to Mars to try and determine the cause of the Martian’s sudden intolerance, and hopefully bring them to a peaceful resolution. The looming possibility is that Tantalus will have to be the new home for the human settlers on Mars.
The Tribal Elder and take a bigger role in this book. Although we get a bit of info about things on Tantalus the majority focuses on the events on Mars.

This is the seventh book I have listened to by this narrator ( Brian Callanan ) and I look forward to listening to books by him. I enjoy his style. He is the only voice for this series, he has made these characters come alive.

This is book 4 in the series and it’s as gripping as the other 3 . You won’t want to put it down . You’ll fill like your right on the plant that’s how real M.A makes the scenes .

Brian nailed this story . His voice is strong clear and smooth. He was fantastic

This story is best enjoyed if you’ve read the previous books in the series.
The Tribunal Elder of the Tantalarians has been contacted by the residents of Mars to remove the human settlers from their planet or they will die.
When he arrives with his chosen representatives, the TE is called on to help solve multiple problems. Along the way, the hunters of Tantalus and the previously sequestered scribes are allowed to meet and find their natural mates.
The Audible and my story descriptions don’t really do this justice. Abraham has caught my interest and I’ve purchased additional stories in the series, in both ebook and audio. A feat, indeed, as this is my 785th written audio review; this, out of the thousands of books I’ve read in my lifetime.
I really enjoy Callanan’s voice and the various characters he is able to portray.

I received a free copy of this book in exchange for an honest review; I was not compensated for my review and I was not required to write a positive review. The opinion expressed here is my own.

A meeting of different cultures in a stressful environment. Which usually causes arguments, throw in a little romance and top it off with intrigue.
The narrator did an excellent job, his experience showed in his voice creations, clear and smooth. I liked it for the most part, but it was a one timer for me.
This audio was given to me free, and I voluntarily gave this review.

This book brings a major twist in the series, that I didn’t expect. An exciting continuation of the series where we find out more about Tantalarian history, a conflict on Mars and a positive outcome for all involved. This is the book where my BBF from the series, Kyllan really shows his skills as a leader and a negotiator. I recommend it and the series with 5 stars.
Mr. Callanan is brilliant with the new characters' voices and the seamless continuation with the voices of the characters we met in the previous audiobooks. Well done!

A good addition to the series

I liked this book and how it added a lot more depth to the series. It gives more background on the Tantalarians and I liked that. The narration by Brian Callanan is very well done. As with the previous book, it wasn't quite so focused on the sex and relationships. It really focuses on the story and I enjoyed that.