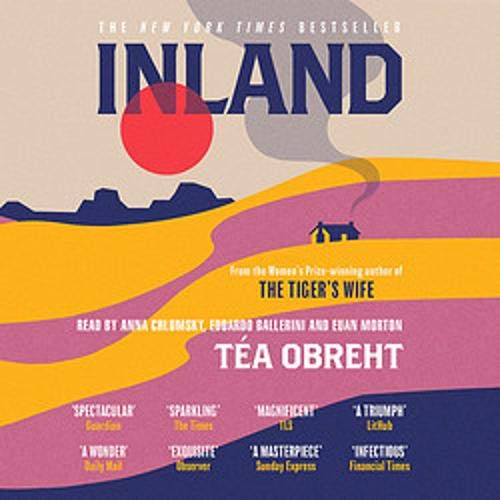 Nora is an unflinching frontierswoman awaiting the return of the men in her life - her husband who has gone in search of water for the parched household, and her elder sons who have vanished after an explosive argument. Nora is biding her time with her youngest son, who is convinced that a mysterious beast is stalking the land around their home, and her husband's 17-year-old cousin, who communes with spirits.

Lurie is a former outlaw and a man haunted by ghosts. He sees lost souls who want something from him, and he finds reprieve from their longing in an unexpected relationship that inspires a momentous expedition across the West.

Mythical, lyrical and sweeping in scope, Inland is grounded in true but little-known history. It showcases all of Téa Obreht's talents as a writer, as she subverts and reimagines the myths of the American West, making them entirely - and unforgettably - her own.

What listeners say about Inland

Winner NYT best seller 2019 but not for me

I really wanted to like this; it's beautifully written and exquisitely performed but, even with the help of a professional review, I had no idea what was going on beyond two very long, seemingly independent diary entries. These are stories in parallel; one evidently taking place over one day in a severe drought, the other over many years, and both in a fictional US state. There is magical realism although it can be hard to spot - or it was for me because in fairness I found it difficult to maintain my focus or interest. The only character I had any sympathy with was a camel, the rest were just story fodder. If it were a film it would be art house and the cinematography would be perfect but you might be hard pressed to find a satisfactory payoff for your viewing efforts. Admittedly, sometimes it's less the destination, more the journey that makes fiction worthwhile and I can see this might appeal to some so I'll hold off from describing a key element that most irritated me. It won the New York Times Best Seller award in 2019 so it obviously has something going for it, I just didn't find it. C'est la vie!

it may take me a while to digest this novel. it is unlike anything that I have read before. a wide streak of magical realism and evocative setting