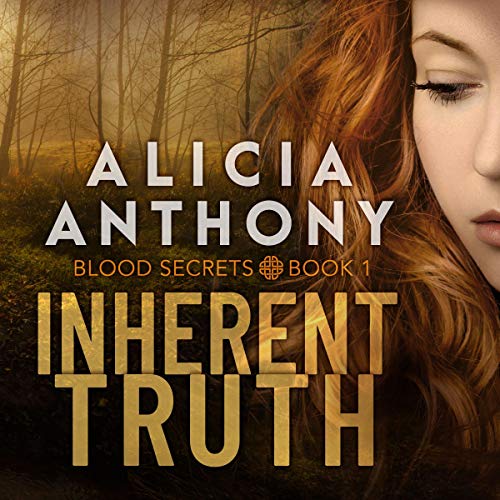 By: Alicia Anthony
Narrated by: Rebecca Gallagher
Try for £0.00

A woman with buried secrets. An agent with an impossible mission. An inheritance that will destroy them both...

When Liv Sullivan’s dead grandmother beckons for help from beyond the grave, the reluctant psychic returns to her small Ohio hometown. Scrambling to make sense of the clues left by the vision, Liv finds herself face-to-face with undercover agent Ridge McCaffrey.

Assigned to protect a woman - whose gifts unnerve him - for a covert psychic intelligence operation he doesn't understand, Ridge struggles to place duty over desire. But when a gruesome discovery is unearthed at Sullivan Farm, the truth becomes clear.

Inherent Truth is the first book in the gripping Blood Secrets psychological suspense series. If you like pulse-pounding suspense, otherworldly encounters, and a touch of romance, buy Alicia Anthony’s thrilling debut!

What listeners say about Inherent Truth

Such a fantastic book!!

I couldn’t stop listening to this book until I’d finished it! Now I can’t wait to hear the next one! I loved the story and the narrator has an amazing voice that is easy on the ears. It reminded me a little of Discovery of Witches and Twilight and a teeny Fifty Shades but in the best way. The story is like a crime mystery but with a hint of paranormal that is actually quite believable. I really did enjoy it and highly recommend to anyone. I would love to see this made into a movie!!

Good audio book and kept my interest from the start to the end. The story line is very interesting.

Pretty good, but not sure I’ll get the next one

But. The romance is the kind where the protagonists have instant heat, which is ok; what annoys me is that the guy is full-on lying about who he is to the lead character, but gets bent out of shape when he thinks she is whithholding from him or possibly lying to him. There are parental revelations that don’t get discussed - why not? There is a character that kills himself when he is supposed to be unconscious, and the denouement is confusing since you have no clue that certain characters were ever in the the United States at the time in question. And mostly,... I get leaving a couple of cliff-hangers, but over half a dozen and I get cranky.

Ms. Gallagher does a decent job as narrator, though she threw me in the beginning when a character was supposed to have a bit of an accent and she only gave him an accent in one or two sentences. A strange anomaly in an otherwise good job.

I loved this book. It caught my attention from the very beginning and was exciting until the end! I couldn’t wait to get in my car so I could listen to more! Great story line full of suspense and twists. It has everything that I love in a book. I cannot wait to read or listen to the rest of this series!

I will listen/read every book in this series can’t wait to listen to the next!

Rebecca Gallagher is an excellent narrator who distinguishes each character admirably. Her accent work is good and she evokes the characters emotions clearly.

I was given a free review copy of the audio book “Inherent Truth” by Alicia Anthony at my request. I have voluntarily left this review. I do not usually listen to audiobooks, especially psychological thrillers. I started listening and got through the whole thing in one day, as I could not stop listening. This is full of unpredictable twists and turns. I can’t wait to download the next book. The narration was perfect and really brought the characters to life! I loved the story. I highly recommend this series!

What a great story. I was enthralled from the very beginning. Put a woman with vivid dreams, her grandmother who has left her estate to her, an old murder, and a handsome man of the law entwined together. And then there’s an old beau that comes back into the picture. The action is non-stop. How do all these people relate to each other? You must really listen to it yourself. I highly recommend it.

This book stole my time - I enjoyed every minute of it. More than once I would tell myself that I’d listen to the end of THIS chapter and find myself repeating the same phrase again and again. It kept me intrigued by all all its twists and turns.

My kudos to Rebecca, too . . . I don’t know how she kept all those voices straight - loved that Irish brogue!

Mystery With An Edge

The narration brought the edge to this story out. It dealt with secrets, mystery and a little paranormal. Lov has a gift, which Rafe doesn’t understand, protect her he will. Found it to be intriguing and looking for the next part. Given audio for my voluntary review and my honest opinion

Absolutely fell in love with this book. Loved the way it tells of the love between the two main characters. And tells of the gifts she has and the twists and turns that keep you wanting to listen to see what happens next can't wait to see either.