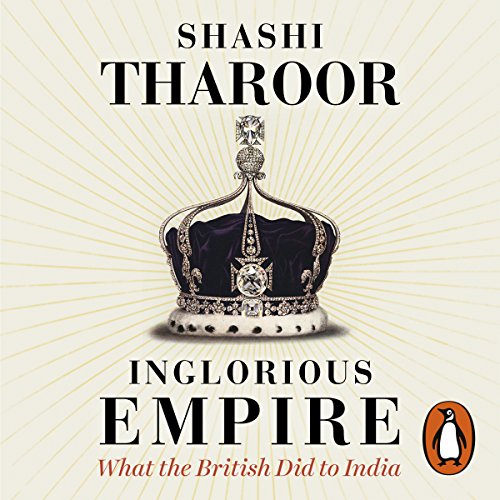 In the 18th century, India's share of the world economy was as large as Europe's. By 1947, after two centuries of British rule, it had decreased sixfold. The empire blew rebels from cannon, massacred unarmed protesters, entrenched institutionalised racism and caused millions to die from starvation.

British imperialism justified itself as enlightened despotism for the benefit of the governed, but Shashi Tharoor demolishes this position, demonstrating how every supposed imperial 'gift' - from the railways to the rule of law - was designed in Britain's interests alone. He goes on to show how Britain's Industrial Revolution was founded on India's deindustrialisation and the destruction of its textile industry.

In this bold and incisive reassessment of colonialism, Tharoor exposes to devastating effect the inglorious reality of Britain's stained Indian legacy.

What listeners say about Inglorious Empire

I was fascinated, horrified and saddened by this brilliant and coolheaded account of the atrocious behaviour of the British in India. It says much of the country and its people that they do not all hate our guts. 35 million deaths from famine under British rule and I never heard a word about the evils of empire at school. Tharoor's English is wonderfully rich if at times quaint in his pronunciation.

The title of the book says it all.

A story of the horrors of the Raj., well written and narrated by the author. I learned a lot about the racism behind British rule and the greed of the east India company. And the lasting problems that can arise with colonialism. which still exist to this day because of the lack of concern for the governed by those in power.

An informative and entertaining audiobook.

I really enjoyed listening to this informative audiobook. I bought the hard back but didn't manage to get very far. I was thrilled when the audiobook was produced. Shashi Tharoor narrates the book well. I feel I have gained a better understanding of the impact of British rule in India.

The unbalanced view of a nationalist politician

I listened to this book whilst traveling in India and fully expected to sympathize with the overall consensus of a cruel imperial rule of India. There is no doubt that the vast majority of the inhumane and cruel actions mentioned in this book did indeed occur and should be condemned by all. However, I was put off the book by the simplistic glorification of India pre and post British rule and that most of the book refers to favorable works, supporting the ideas of the author, which are also the narrative pushed by the Congress Party for whom he is an MP.

This narrative is simply contrary to the accounts of the vast majority of other works on the subject and isn’t helped by a particularly spiteful tone, spoken from a moral high ground which the author clearly has not earnt with his many controversies and elitism in Indian public life.

Furthermore on my travels through India, I saw that the same problems still exist in India, as control has simply passed from the British to a high caste elite, who live in wealthy cantonments whilst life for many hasn’t changed a great deal. The book just doesn’t add up with all of the other knowledge I have accumulated on my travels and research, which leaves me to conclude it is nothing but a simplistic story for political popularism.

I came across this author through various short media bites on social media and bring a Indian born and British raised adult in recent years I've wanted to learn about Indian history, moreso the years during the colonial past of India under the British. This is merely one perspective and factual account often referencing material from official British records I was traumatized by some of the revelations of the action s under British rule (no spoilers) make or it what you will by having a listen. The narrator is Shashi Tharoor for me I found it difficult to engage with his style but this may also be due to the fact the book is written from a analytical and referencing perspective so it maybe a better read than listen. However it's a great piece of literature and worth having in your collection.

I was aware that perhaps British colonies were perhaps treated better than those of other countries, or so ithought. The sheer scale of the management of cash extraction and ruination is eye watering. Very well presented. Knowing the mindset of the aristocracy and landed gentry it sounds like a simple continuation of "more for me" that we are all used to. Interesting summary of Ghandis non violence vision.

Thoroughly enjoyed this book, I had never known this side of the story regarding England's relationship with India during its colonial days.

Simply by listening I felt educated.

I also feel both informed and disappointed at the same time. The reason for this is that I idolised Churchill above all other PMs for his "in my oppinoin" can do attitude coupled with common sense... however after listening to what I felt was a fairly neutral view, drenched in evidently researched facts, I can no longer see Churchill in the same way.

Another disappointing part being how Britian was so ruthless and self serving whilst in controller of India... I strongly feel that after listening to this account that if Britain had either left India alone or simply reinvested part of the sums they made back into India , we could as a people be so much further on globally, both socially and technologically.

Thank you to the author for publishing such a work to pay tribute to his country that suffered such hardship under mine. I wanted to say sorry for what happened myself although as he stated today's generations where not at fault for their ansestors past ventures, but during those century's I don't believe my ansestors where british either prior to Churchills time, more likely they where colonials from Ireland and else where...My point being anyone who loves thier country and hears how ruthless it was in the past would feel guilt towards those wronged as I did listening to this account of events.

The book is well read, encaptures the open minded and inquisive reader/listener. It has also given me an interested in learning more about other lands colonised by Britain during its emipers rein.

This is absolutely essential reading. It's a book that everyone needs to read. Very recent history, and how the effects of it still linger. Phenomenal.

what a well structured informative and insightful look at India during before during and after the Raj.
Tharoor builds his opinions from contemporary accounts both from within India and international scholars.
The book is not looking to be a chronological accountee of events but a discussion spanning India's history to assess the reasons for the Raj and it's motivation.
British and Indian history is intertwined through colonialism, this book addresses the paternalism and pillaging.

Crash course in India during the time of Raj!

Shashi Tharoor’s voice is mesmerizing and his diction pleasing to the ears. It works like a master class to those who are not native English speakers. How wonderful it feels to listen to audiobooks by the authors themselves.
This book was like a revision of the history of India during British rule. It just flows and ends and you will be on a roller coaster ride with thrilling moments of Gloriousness of India before Britishers came in, to the torture that our ancestors faced. It certainly strikes a chord and you start thinking more about India with pride, love and compassion. The book has tons of references of other works by great authors which will build your reading list.
Despite that fact that Mr. Tharoor has written 19 books, only this one is available in audible. Wish to listen to more of his books in his voice.

An intricate crash course on the British Empire from the very brilliant Shashi Tharoor. A must read for every Indian & for any one interested in Colonial Geo Politics.

Well researched, very well written and narration is one of the best one would ever listen to in english. This audio book made me look forward to my daily commute and appreciate traffic delays :-).

This is excellent depiction of what Britishers did to India. Being 68 year old Indian this is first time I was exposed to darker side of British Raj. Very well done, Shashi.
A must read book

Pompous, politician, populist, narrow minded. only minimal lip service to the many problems of Indian society not caused by the British.

Churchill IS a racist!

amazing book. should be required to be read by all UK secondary school children. sobering.

it's a must read for every nationalist or student of history! An eye opener and a slap in the face of the British who claim that they helped India by colonizing this great land! Jai Hind

Loved this book. Well researched and analysed. Shattered many myths for me and will serve as a reference.

A must read for every Indian

Very insightful and informative. A cure for anyone with a colonial hangover. Forgive (if you are inclined to) but never forget.

Must know ... Inglorious Empire bloody past and dark cruel history. Excellent book and must read to know truth of British empire