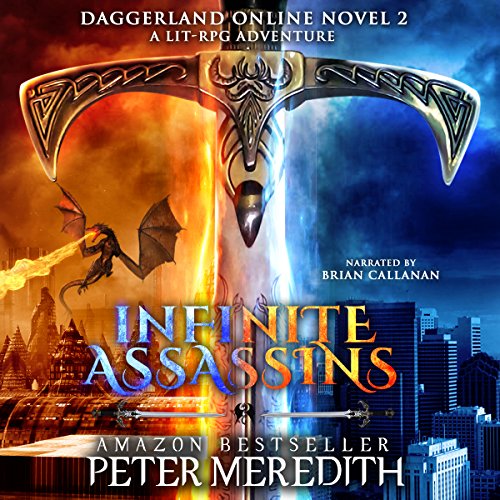 By: Peter Meredith
Narrated by: Brian Callanan
Try for £0.00

Two weeks before the trial of Atticus Arching, his radical followers, the Infinite Assassins, decide to take the law into their own hands. Using the bodies of innocent Online players, these unkillable assassins target the entire prosecution team, including the only witness in the case, FBI Special Agent Daniel Roan.

Escaping by the skin of his teeth, Roan is forced to go on the run. Hounded day and night by the assassins, he finds the only way he can strike back is to go Online and infiltrate the very group that’s after him.

The only problem is that they only take the very coldest of killers, and Roan is forced to become everything he hates: liar, thief, murderer, assassin!

What listeners say about Infinite Assassins

This story is less of a second part and more of a completely different story with a few familiar names sprinkled in to tie to the previous narrative. my only issue with this story is the narrator is a bit more monotone than ideal.

I'm praying this isn't the end of this series. I want more adventures in DaggerLand!

Great continuation of the storyline.

Same quality writing and performance as the first novel. The focus remains on the storyline, which moves smoothly.

This book takes a good base story and found a way to add and expand on the idea.
I loved the change of pace and viewpoint showing some range in storytelling.
A great story with a different take on the normal hero stories. I would recommend it to any fan of RPG lit.
Again the RPG element actually adds to character development as it helps fill gaps and explain motivations within the story at times.

The characters again are well formed and the development is different to the first book but suits the tone of the story.

Narrated again with skill and attention to detail. The characters are well voiced and distinct between them. This pulls you into the story as you never have a what is going on moment.

I thoroughly enjoyed this book and the first.
This author is definitely on my one to watch list.

I was given this free review copy at my request and have voluntarily left this review.

I really liked this follow up to the first book. Just as the first one, I really enjoyed it. I still think that all but the most picky LitRPG purists will enjoy the story. The narration continues to be well done. Definitely worth a credit, if you ask me.