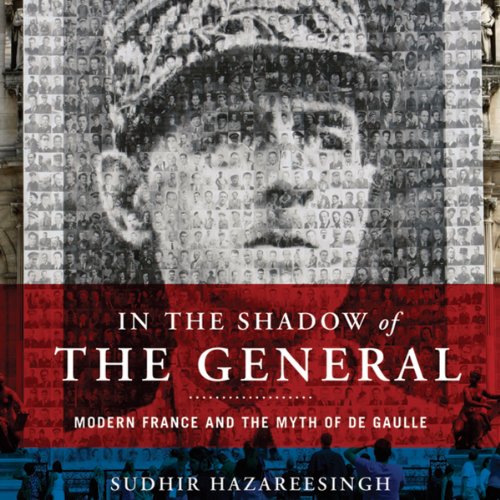 In the Shadow of the General

In the Shadow of the General

Charles De Gaulle's leadership of the French while in exile during World War II cemented his place in history. In contemporary France, he is the stuff of legend, consistently acclaimed as the nation's pre-eminent historical figure. But paradoxes abound. For one thing, his personal popularity sits oddly with his social origins and professional background. Neither the Army nor the Catholic Church is particularly well-regarded in France today, as they are seen to represent antiquated traditions and values. So why, then, do the French nonetheless identify with, celebrate, and even revere this austere and devout Catholic, who remained closely wedded to military values throughout his life?

In The Shadow of the General resolves this mystery and explains how de Gaulle has come to occupy such a privileged position in the French imagination. Sudhir Hazareesingh's story of how an individual life was transformed into national myth also tells a great deal about the French collective self in the twenty-first century: its fractured memory, its aspirations to greatness, and its manifold anxieties. Indeed, alongside the tale of de Gaulle's legacy, the author unfolds a much broader narrative: The story of modern France.

I enjoyed it and I learned a lot. It should be pointed out, however, that this is a book about the evolution of the de Gaulle myth rather than a historical account of de Gaulle's years in power. You end up getting a good, general overview of his life through the book, but that is not the main thrust by any means.

The narrator seems to know French well enough, but he tends to overuse his French accent throughout the audiobook. What's more, his accent often sounds more like someone making fun of a French accent that an actual French accent (particularly when he reads direct quotes from de Gaulle).

Once you put that aside, Mr. Patry often mispronounces basic English words by placing the emphasis on the wrong syllable. (For example, he says "Mi-li-TA-ry" instead of "MI-li-ta-ry") After a while, I got use to his odd cadence, but if you are one who can't stand that kind of thing, I do not recommend this audiobook.

While it was well constructed, the book focused heavily on party infighting, political rivalries and French electoral mood than De Gaulle and how he shaped the country. It was difficult to follow without a solid background on 40 years of French Politics. Narrator was great and spoke both English and French without accent.

An uphill struggle - and a horrible narrator!

There are not that many books on De Gualle on audible, so I ended up with this one - finishing it seemed like an uphill struggle, though. I would have preferred a conventional biography, which this book most definitely is not. It is about the way De Gaulle and his "myth" have been perceived by the French and, to a lesser extent, the rest of the world over time. It presupposes a great deal of knowledge about the history of France, especially post WW II, and of De Gaulle's biography, which I did not have. But it did provide a motivation to research things, I have to admit.

What was really awful about this reading was the narrator. I would be really curious to know what the man's mother language is. It doesn't seem to be English since, although his reading was, overall, pleasant enough, his accent was neither typically British nor American nor, indeed, any other of the native accents of English I am familiar with. What's worse, he kept pronouncing "heir" as "hair", sounding the initial "h", which is silent.

But he can't be French either, since he often, and painfully, mispronounced some French words no native Frenchman (indeed, nor even a foreigner with a sound knowledge of French) would ever mispronounce! One example should suffice: he repeatedly pronounced "Maréchal" (Petain's rank comes up fairly often in the book) "Marekal" reading the "ch" (which should be read "sh") as it if were a "k" (or hard "c") ! Honestly!

As if such mistakes were not annoying enough, every time he read a quote from a Frenchman (and, not surprisingly, there's quite a few of those in the book) he felt obliged to do it in a mock-French accent that made every Frenchman in the book, first and foremost De Gaulle, sound like Inspector Clouzeau!

All in all, as far as I can tell, the book is good for what it purports to be. As I said, this was not the kind of book I was looking for, but that can't be the author's fault. But, the narrator... arrgh!