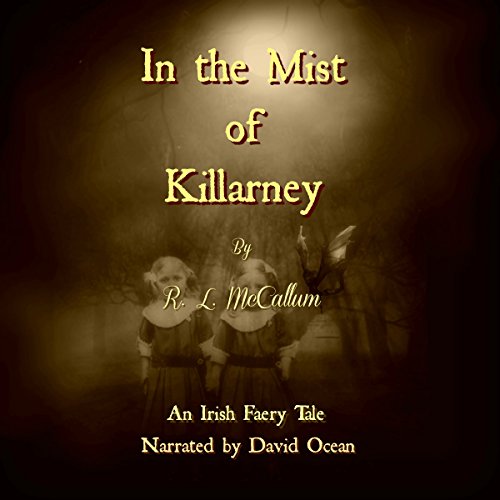 In the Mist of Killarney

Ireland, 1911. After encountering a faery in the woodlands near his home in Tralee when he is a child, Professor Emmet Brehon spends his life pursuing the belief that faeries are more than just elements of mythology. While teaching Irish mythology and folklore at a university in Dublin, he receives a note from a stranger who claims to know where faeries can be found. Following the map that the stranger gives him, Emmet travels to a faerie circle and mound near Lough Leane in Kerry, where he encounters two ghostly little girls and a faery light. Snapping a photograph of the girls and faery light with his Brownie camera, Emmet's life becomes twisted when he discovers that he can't rid himself of the photograph, and disasters occur whenever he is present. He soon loses all in life that it is precious to him, including his sanity.

What listeners say about In the Mist of Killarney

Starting off in 1911 Ireland, Professor Emmet Brehon is on the hunt for fairies. He believes they are more than simple bits of folklore. He finds a secluded place that is rumored to be visited by fairies and surprisingly, he sees two young fairy like girls and a mysterious light. He snaps a photo, intending to use it as proof of the existence of fairies. Alas, one misfortune after another falls upon Emmet and those close to him. He starts to suspect the photo may be more than a simple picture.

The story took a little while for me to get into. Things start off quaint and cozy. Once horrible things start happening, the pace picks up and things are much more interesting. First, there’s this mysterious photo and Emmet is the only one who seems to be able to see the fairies and the ghostly light in it. Then he notices that when he sees nothing but the background vegetation in the photo, bad things happen. First, there’s a car accident and the mother of his fiance is killed. At the funeral, there is an awful storm and the open grave fills with water and the coffin floats off, perusing Emmet and Katherine (his fiance). It goes on from there – the spooky and misfortunate and disfiguring and sometimes deadly events pile up.

Emmet eventually learns that he can’t destroy or bury or pass off the photo to be free of the troublesome spirits that inhabit it. Unfortunately, he also can no longer get stinking drunk and forget about the photo. Poor dude. Emmet tries to the flee Ireland, hoping to leave the magic that powers the spirits behind. However, this proves very difficult. I really enjoyed that it was not easy or simple for Emmet to be free of these spirits. It becomes the thing that drives him but also the thing that gets him in trouble with friends and authorities alike.

The story spans 4 years and the author threw in some references to famous people or events of the time, like Houdini and the Titanic. I like that he did this, giving me reference points to other things happening in the world at the same time that Emmet is struggling with his spirits….. or a mental illness? Indeed, as the story moved forward, I had to start wondering if Emmet was all there, as some characters in the story wonder. The author doesn’t push the reader one way or the other and it’s up to you to decide.

Over all, it was a fun tale of classic horror. There’s not much gore, as the story relies mostly on the psychological terror of the events Emmet is party to, or at least a witness to. I really enjoyed this aspect of the story and I’m glad I stuck with it.

I received this book free of charge from the narrator in exchange for an honest review.

The Narration: This was a tough book to get through because of the narration. The volume keeps changing. The narration in general sounds either muffled or like at the end of a long metal tube. David Ocean tries to spruce it up a bit with a few sound effects but these are roughly pasted into the performance, like the sound of two girls giggling. Also, sometimes when he does a different character voice, like Katherine’s, that also sounds pasted in – not always, just sometimes. With that said, he does do an Irish accent for Emmet and Katherine all the way through the book. His female voices are believable.

Professor Emmet Brehon believes he saw a sweet faery as a child and has spent his life studying folklore and mythology. He is excited when he receives a note and map telling him where to find faeries in Killarney. He travels there one night in 1911 to sneak up on a faery mound with his new Brownie Camera. Emmet is ecstatic to get a photograph when he spots two ghostly little girls and a faery light with wings. He hurries away treasuring the camera in hopes that he will finally have proof of his discovery.

As soon as Emmet returns to the ancient inn where he is staying dark things begin to plague his life. Others die around him as he escapes a fire at the inn and then a train crash while returning to the city. He is able to get the photograph developed but the image of the almost transparent girls and the dot of winged light acts strangely. He hears girlish giggles and a banshee scream right before another death or accident occurs. He becomes more distressed as he leaves a trail of dead acquaintances and friends behind him. Emmet seeks to rid himself of the photo and the curse without success.

Emmet is taking his wealthy fiance’, Catherine, out for dinner planning to explain the problems he is having. Another accident occurs with the driver of their vehicle killing a woman in the street. He convinces Catherine that they must leave Ireland and travel far away to America to try to out run the faery curse. Needless to say, one can’t outrun a curse that you carry with you.

Emmet survives ship disasters and suspicious doctors when he finally arrives in New York. Before he is able to return to Ireland he will face other physical and ghostly encounters that bring him to the brink of madness. The doctors think they can help but will Emmet face medical danger too?

Note the darkness of the cover of this story and be forewarned. The story moves well, but is not light; it is dark. It is engaging in a macabre way and not good for bedtime reading. I liked the dark ironies and the tie-in to well-known events of the years the story covers. I think this is best suited for adult readers/listeners who enjoy dark folklore or even horror.

Audio Notes: I have to admit I was intrigued by David Ocean’s lovely brogue and most of the narration as it fits Emmet. Sadly, the female voices did not work so well as they were more strident or shrill than feminine. I did enjoy the added sound effect of the ghostly giggles and banshee wail although there were a few in the middle that were out of sync with the tale. For me, the audio made this a better read. However, readers interested in this should enjoy it equally in either format that suits them.

I received this title from the narrator for an honest review.

a string of disasters without solution

Professor Emmet Brehon has a fascination for Faeries, so much so that he will risk their wrath by disturbing their private ceremonies.  To prove his theory of the existence of faeries, he captures two faeries and a banshee on a photograph.  In so doing, he has become cursed and tragedy on an epic scale follows him across the country and even into America.

He travels with the accursed photograph, which warns him only moments before disaster by releasing the images.  He hears the laughter of the faeries, then the unearthly scream of the banshee just before they attack those he loves or knows.  Emmet’s young and beautiful fiancée survives one attack, only to be rendered horribly disfigured.  The tale parallels several epic disasters, ancient fires, several sunken ships including the Titanic.  Emmet tries to destroy the photograph, but it always returns and the punishment greater.  He is unable to die and lives through the terrible ordeals, crushed by guilt and remorse.  Escape seems impossible.

The tale is not much more than a string of disasters without solution.  Emmet really has no control of his life or his curse, which takes a lot of the suspense out of the story.  And though he is a professor, he seems to be pretty incompetent dealing with his fellow men.  The story becomes dry and the listener loses empathy for the main character early on.

David Ocean reads the story in his Irish accent that is entirely appropriate for the novel.  He doesn’t have much inflection in his voice and unfortunately sounds like he is reading the evening news.  His voice is pleasant enough and his character voices are fine, but he doesn’t add much energy to the story.  The production includes background giggling of the faeries and banshee, which might have been better performed.

It is difficult to determine who is the audience for this book.  It sounds like a children’s story, but the length of the story, terminology and scenes are a little advanced for young children.  Perhaps young teenagers would enjoy it.

The blurb sums up the story fine and I won't add anything in case I spoil it, so I'll try to get my thoughts of this straight.

The plot was ok. Being Irish, I always love stories set in Ireland so eagerly started this one night. Plus we spent a few days over Easter in Co. Kerry so the fact that it was set there was a bonus. Such a picturesque place!! The author did a good job of describing the setting fine, I just wish we had a little more action in Killarney.

I liked the idea of the photo and what happens surrounding it. The giggling and noises that happen and the disappearances from the picture were a good addition and made the overall feel more chilling. Again, being Irish, I've been to see a few Seanchaí's and heard a lot of the folk tales and Faery stories, and this had the feel of one of those. I could imagine sitting down and listening to Eddie Lenihan telling this!!

This is, overall, an easy to listen to, Irish Faery tale. I really liked how the author tied in certain historical events with what Emmet is going through!! It added a little extra to the story.

David Ocean did a really good Irish accent. Sometimes you find that when someone tries to emulate us, they get this weird way of portraying the Irish, but this didn't happen here. He was easy to listen to and brought the story to life and I enjoyed his narration.