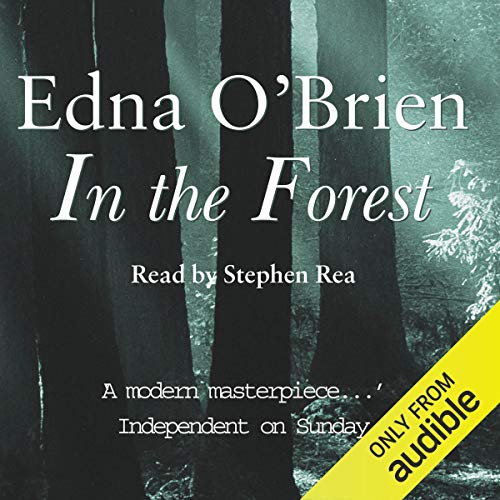 In the Forest, set in the west of Ireland, is the story of a young man who shoots dead three people in a forest glade. The young man, Mich O'Kane, is "not all there in the head" as one character puts it. By puberty, he is already committing petty crimes, ending up in borstal. By the time he is back home he has also served time in a British jail and is an institutionalised criminal. His sexual fantasies, revolving around women in the village, eventually centre on Eily, an artist and single mother, who lives with her son Maddie. One day Mich pounces, and orders Eily to drive them to the woods nearby.

What listeners say about In the Forest

I came upon this book quite innocently. I'd heard Stephen Rea reading a couple of poems on the radio and fell in love with his voice. I searched his name on Audible and ordered the title without even reading the synopsis. I hadn't read anything of Edna O'Brien's since the 60s when she was still writing lightsome romances about convent girls busting out into the naughty wide world.

It wasn't until I'd finished listening to the whole story that I realised it was closely based on a real-life multiple killing and then read of the controversy over her use of these appallingly tragic events as a basic for fiction.

In my view O'Brien has given us an extraordinary insight into the mind of her main character. I have read all of Dostoevsky and find this novel no less moving and profound an account of an injured and insulted human being than anything produced by the Russian master.

Stephen Rea captures every nuance of this anguished, often transcendently lyrical text in a reading which at times left me sobbing in my armchair.

One of the most horrifying tales I've ever come across.

A wonderfully constructed novel based on a tragic true story. The tense prose pulls you in and the narration is fantastic.

Research the actual events before you listen to it.

What was most disappointing about Edna O'Brien’s story?

This book was a very detailed story that could have been much bettter if the author let you know right up front that it is based on a true story. More depth into the people would have helped.

Not sure how I felt about this

I've read her work before, and this was good, but it was so closely based on a true story that I felt uncomfortable reading it as fiction.