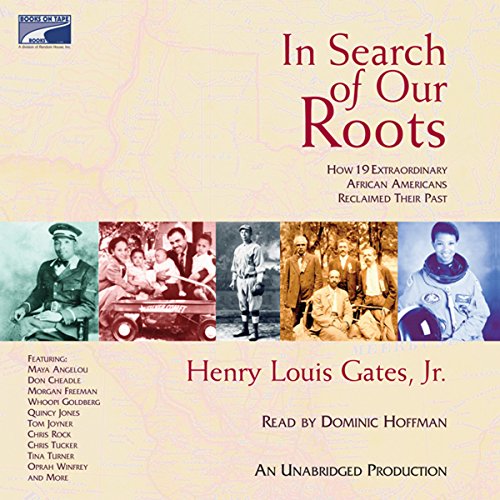 In Search of Our Roots

In Search of Our Roots

Most African Americans, in tracing their family’s past, encounter a series of daunting obstacles. Slavery was a brutally efficient nullifier of identity, willfully denying black men and women even their names. Here, scholar Henry Louis Gates, Jr., backed by an elite team of geneticists and researchers, takes 19 extraordinary African Americans on a once unimaginable journey, tracing family sagas through US history and back to Africa.

More than a work of history, In Search of Our Roots is a book of revelatory importance that, for the first time, brings to light the lives of ordinary men and women who, by courageous example, blazed a path for their famous descendants.

What listeners say about In Search of Our Roots

Interesting and in depth and very American

I think the writer of this book assumes that only African Americans will listen to this. This is a shame, as it is an interesting listen no matter your ethnicity.

This book was amazing! I’m usually a reader where I have to have the physical book. With my busy life I decided to use audible. The content was great! Even the narrator was really good at expressing the others words and feelings. I learned so much about those in the book. My biggest surprise was Blythe and her family!

I recommend this book highly

I expect anyone interested in American history or genealogy would get a lot out of this book.

I have always loved African American history and have been tracing my family tree off and on for years. this was so amazing and inspiring