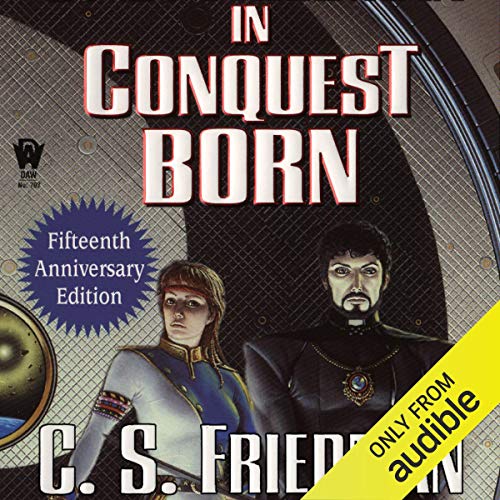 In Conquest Born is the monumental science fiction epic that received unprecedented acclaim - and launched C.S. Friedman's phenomenal career. A sweeping story of two interstellar civilizations locked in endless war, it was nominated for the John W. Campbell Award.

What listeners say about In Conquest Born

If you like epic space opera with imaginatively detailed world-building and a focus on characters rather than gadgets, try In Conquest Born, C.S. Friedman’s extremely impressive first novel. This complex, sprawling story begins with the births of two enemies-to-be from two different worlds that have been fighting each other for generations:

Zatar, a Braxin, is bred for beauty and aggression because those are the qualities his brutal, elitist, and misogynist culture admires. Ruthless, clever, and perfectly poised, he is preparing himself and his world for his ascendancy to a throne that does not yet exist in his oligarchic government. Part of making himself most qualified for this potential position involves manipulating, discrediting, or simply getting rid of any man who might stand in his way. (Women are no threat in Braxa… or are they?)

Anzha is an outsider in her Azean society because of her red hair — it’s an indication of foreign blood somewhere in her lineage. Nonetheless, her psychic powers, which are revered in Azea, are strong and that, along with her unrelenting drive to prepare herself for revenge against the Braxin man who killed her parents, causes her to rise up in the Azean military ranks. When Zatar and Anzha finally meet, they each know they have met their match, and they immediately set out to destroy each other.

C.S. Friedman began building her worlds while she was in high school and continued developing them for years before submitting In Conquest Born to DAW. It shows. The world-building is excellent — both the Braxin and Azean societies (and others) are deeply explored from multiple perspectives. Among other things, each has its own art forms, attitudes toward women, sexual preferences, inherited strengths and weaknesses, and ideas about genetic manipulation and psychic abilities.

Friedman explains on her website that In Conquest Born originally began as “a collection of interconnected stories” which she developed into a novel which was partly re-written when her editor encouraged her to make the tale less “fragmented.” Still, the story feels somewhat disjointed because it covers a huge span of time (it’s a long time before Zatar and Anzha actually meet) and each chapter is a vignette told from one of several perspectives. This technique is advantageous in that it allows us to thoroughly explore Friedman’s worlds, but has the disadvantage of causing us to spend a lot of time with minor, and often expendable, characters. (But then, Zatar and Anzha are repulsive enough that it’s nice to have a break from them.)

Friedman’s plot is exciting — there’s political intrigue, treason, space battles, torture, planet explosions, and horrible deaths. The compelling plot is made even more readable by Friedman’s pleasantly sophisticated writing style which contains just a touch of black humor. She gives us lots to think about, too — nature vs. nurture, free will, parallel evolution, genetic modification. If I had liked her characters better and had been effortlessly carried along by a more cohesive plot, I’d have surely given In Conquest Born my highest recommendation. I have no doubt that C.S. Friedman has the skill to write a perfect novel and I look forward to reading more of her work in the future.

I listened to Audible Frontier’s version of In Conquest Born which was read by Joe Barrett. He gives a very nice reading which is not overly dramatic. His female voices sound much like his male voices, so a couple of times I assumed a newly-introduced female character was male until I was corrected by the text. Once I knew not to expect Mr. Barrett to use a feminine-sounding voice, I had no problem with his reading.

In Conquest Born, first published in 1986, was nominated for the John W. Campbell Award. A sequel, The Wilding, takes place generations later.

What did you love best about In Conquest Born?

Really deep views into the workings of the human mind and attitudes. A unique view into how we would react to very real differences in the the species.

Not really for me

I have listened to Friedman's Coldfire trilogy and was looking for more of her books. In Conquest Born rated highest among readers at Amazon. Some said it was their favorite book of all time. So, I went in with pretty high expectations, and was disappointed.

The story is not terribly, but nor it is really good. An excellent narrator makes up for much of this, making what was in my opinion a medicore story easy to listen to.

The characters: I felt no connection, empathy or sympathy for any of the characters. The main characters often not only did or said things objectionable, but contrary to their character, without any truly interesting inclinations or complexities like Gerald Torrent of the COldfire trilogy. I often didn't like or agree with torrent but he as complex and interesting and a hell of a character. In addition to this, I was often confused as to who the main characters were going to be in the begining. Several characters were introduced in great detail, and often one or more scenes would be told from their point of view, only to have them disappear never to return.

Plot: Boring, predictable, a lesson of black and white polar opposites where bad is bad and good is good and as I reader, I always knew who was who and what was what within this frameworkd. I had expected sci-fi or at least sci-fi fantasy, but what I felt like I got was a rather distant and it seemed to me, improbably love story. Not what I expected based on the book's description and customer reviews. I prefer a little more science in my science fiction and a little more unique, unexpected systems in my fantasy. I don't usually read romance, but would expect more angst, struggle, some strong emotions, not a bland depiction of fate.

Backstory: I usually don't have much to say about backstory or set up in books, its there, sometimes delivered in fake feeling dialogue or just delivered in paragraphs of backflashes or descritpion. Its not great, but what ever, all these devices get the job done, and I realize this usually has to be done one way or another. But, I was really frustrated with the way this book delivered the backstory/set up. It used communications for much of it, letters,phone calls, telepathic transmissions, which I found really disconnected from emotion, characters, and I kept listening thinking, people don't really write/talk like this, and I found it really distracting.

Ending: I saw it coming a mile away, what else can I say?

There were some interesting parts, but for me they were all secondary or behind the scenes things. For example, I found the idea of genetic manipulation, such as to develop human telepathy, and all the controversy that comes with that, and it was touched upon, but didn't ever get much attention.

Overall, not a bad listen, and I listened to all of it. Most people seem to REALLY like this book, and I thought the narration was excellent, so you'll probably like it.

Regarding heading: optional or required?

Slow start, didnt hold my attention at first.
Got better over time, really drew me in at the end.
Similar listening experience with other CS Friedman books.

Has In Conquest Born turned you off from other books in this genre?

If you could play editor, what scene or scenes would you have cut from In Conquest Born?

At least half them, there was so must stuff in here that seemed completely random and pointless.