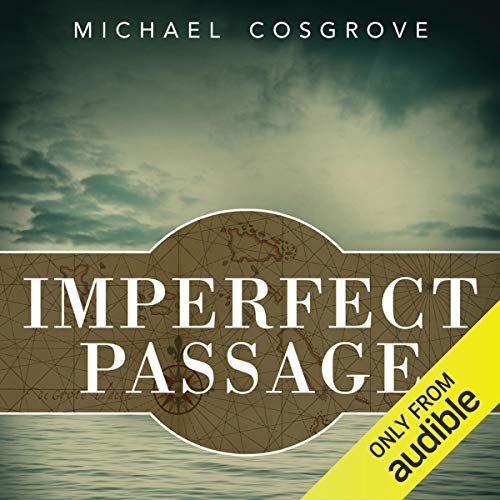 By: Michael Cosgrove
Narrated by: Peter Powlus
Try for £0.00

Michael Cosgrove had a beautiful family, a successful career, and a lovely Southern California home overlooking the Pacific Ocean. At the age sixty, he decided to leave that all behind to sail around the world. In spite of his romanticized vision of rugged individualism and salty tales to share with his grandchildren, Cosgrove quickly realizes that sailing around the world isn’t going to be as easy as he’d imagined. From a psychotic crewmate, sleep deprivation, and mental breakdowns, to stormy weather and hallucinations, Cosgrove rides the waves, holding on as best he can to his dream of “doing something grand.” Alone, and thousands of miles away from everyone and everything he loves, he is forced to ask himself one question: What in God’s name am I doing here?

In his attempt to avoid the inevitable (growing old, weak, frail), Cosgrove runs amok. He breaks his budget to outfit the boat and then refuses to read the manuals. He enters unfamiliar harbors in the dead of night, hires a violent first mate, and sails headlong into ferocious storms. In the midst of his adventures, he longs for the simpler days when his four daughters were still children, when his first marriage was still intact, and when his future still seemed bright and expansive. Though driven by scenes of sheer terror, absurd folly, and deep inner searching, Cosgrove keeps his sense of humor throughout his harrowing journey.

Imperfect Passage is the story of one man’s perseverance against Father Time and Mother Nature, proving that with enough will, one can, in his or her own way, conquer the unconquerable.

What listeners say about Imperfect Passage

Great tale. Eye opening if you're ever considering a similar adventure. Do it but think twice and lots of preparation.

From minute 1, this book has amazed me in every possible sense a book can do. The writer, Michael Cosgrove, tells his story in such an easy, fluent, delightful and funny way that I couldn’t stop listening till the end (applauses to the narrator too!). His travels were full of unbelievable and breathtaking stories, and it made laugh out loud, cry, expect the better and the worse and I feel I just want to star all over again. Thank you captain and thank you the narrator for the one of the best books I’ve ever came across!

Really enjoyed this. the narrator made me feel that I was listening to the author describing first hand what had happened. Although you know the author must have survived, there are many nail-biting passages where you really think, "he can't possibly survive this!" Thought on the lessons learned in adversity often seem trite. However, this guy speaks from the heart and seems truly changed by his experiences. He shows clearly how much growth he needed and also that, at sixty, he still had the strength for it. I only hope I don't need to endure the horrors he went through for my own passage.

From the beginning to the end this was just a fantastic listen. Interesting and so real and pure.

Outside of the sailing the book isn't all that bad but as soon as it gets there it is turning into a childish stereotypical white American voice. Bad seaman ship and even impossibilities like holding a sailing yacht into the wind with head and mainsails set.

I found the negative reviews to be quite harsh of Mike. His ability to just tell the story, including all his mistakes, was the highlight of this book. He could have easily made excuses, but did not do so, and is no less a sailor for all the craziness that happened.

story is more a long whinge with author coming across as unprepared, angry and rather too uncaring... me myself and I!!!

I've read easily tens of sailing adventures and this is easily in my top three!

it still works for sailors

despite some necessary drama on the water front, I loved the human honesty and life changing message. see you on the water Michael ? (hopefully) ;)
loved it. great work. Neil

What disappointed you about Imperfect Passage?

Many facets of the story were disappointing, but the fact that he gave up his quest to circumnavigate and thus NOT achieve the lofty goal he set for himself was the most disappointing part of the book.

Has Imperfect Passage turned you off from other books in this genre?

Absolutely not! My partner and I are about to embark on our own sailing adventure and we are hungry for knowledge from others who have lived this dream. It also gets us excited and keeps us motivated listening to great sailing stories. This story did cause my partner to comment how lucky he is....several times :) So something good came of it!

He did a great job of sounding like an arrogant, wealthy, Californian: so he was the perfect narrator for this book.

This book is about a 60 year old man missing his very high maintenance girlfriend so he gives up on his adventure and has his boat shipped back to the states from New Zealand thus ending his journey on a bad note (mentioned in other reviews). His incessant whining is tiresome. This is not a sailing around the world adventure story as I thought it would be. As a woman who dreams of sailing to far away places, I cringe every time he mentions "his Sally". She is the antagonist in this story and not at all likeable. She wont even stay on the boat with him when she comes to visit him in Tahiti. Yuk! If your looking for a real sailing adventure story I suggest "Islands Oceans and Dreams", by Michael Salvaneschi. He too misses his family and thus ends his adventure AFTER an almost decade long circumnavigation. The story is ripe with adventure, friendship, & far away places. I am in no way related to or know the author, I just appreciate when other reviewers give me options when searching in this genre.

The worst story about "sailing" I've ever heard.

What was most disappointing about Michael Cosgrove’s story?

This book was advertised as a story about a sailing adventure. There was very little sailing in it. Most of the time, the author spends complaining about why he doesn't want to be at sea. And when he's not at sea, he complains about not being at sea. His decisions are poorly made, then he complains about his situation. What a whiner.

What aspect of Peter Powlus’s performance would you have changed?

The way he read the book was fine. It was the content that was intolerable.

If you could play editor, what scene or scenes would you have cut from Imperfect Passage?

The entire time he spent in the south pacific. He complains about everything. He doesn't seem to engage with the people around him. The scene where he hits another boat, then attempts to blame the other captain for his mistakes. Several hundred musings on how much he loves and misses his family. Ugh.

If you think you're picking up a story about sailing, think again. This story will not inspire you.

This book is about a man who has a crisis and decides to sail. I did not like how this was just a thing to accomplish for him. He often would say things like conquering the storm or achieving the tough passage. I definitely would not want to be this guy’s friend. He is arrogant and always right. He even talks about hitting a right of way boat and then says that the other boat set him up. That is a convenient excuse for being negligent and then running away from his responsibility.

He does have an interesting story to tell. His descriptions of the sailing experience and some of the tough parts were well written. He has some epiphanies that are worth hearing about.

His story was inconsistent at times and barely believable. Read this book with caution. This is not about someone who loves and appreciates the sea. He is not very knowledgeable about sailing. It is a sixty year old man who decides to sail away and considers any accomplishment as conquering something. The book focuses more on his thoughts than the sailing I was hoping to read about.

Good read, well worth the time

The ending leaves a bad taste in my mouth but I understand why it was done.

Tough to go into it further without spoiling the
Read though.

Spoiler alert, he quits. This is understandable and he manages to make it much farther than most people (including myself) could even imagine. The problem is that he comes across as an overly judgmental person. Just one example is his harsh criticism of a crew member he feels lacks skills, with himself not knowing how to change fuel filters on his diesel, instead asking for a tow. He is also constantly whining about "his Sally". Why didn't someone tell him during the editing process how ridiculous this sounded every time he repeated it? Another annoyance was his constant translation from knots to mph. Most people reading a sailing book know this, and those that don't can figure the translation out ourselves after the first example two. I would pass on this one.

I really enjoyed both the story and the narration. I love sailing and this book did a fine job explaining some of the details relating to sailing and the emotion associated with crossings and being alone.

gets better and better

It is a lesson in life for every man with the realization of getting older.

One man's experience with the yachting fantasy come true.
A middling story fairly well told but not a modern trans-oceanic swashbuckler.
It made my return list unfortunately.
Narrator did fair reading.

As a hopeful beginner cruiser, I enjoyed the story, the character, the sailing adventure and the narrator.

kept me interested all the way to the end. very very good. if you like adventure you will love this one