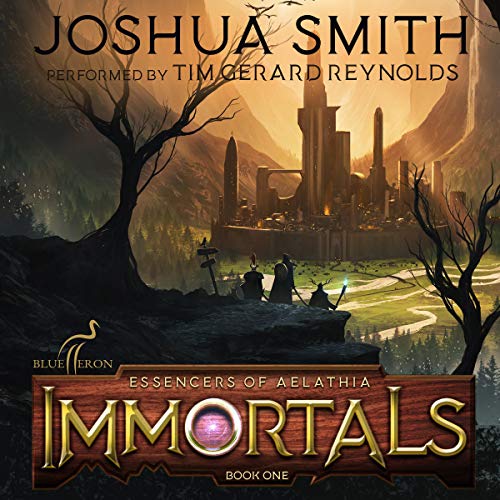 The world has been destroyed...

...and remolded in the image of its destroyer.

For thousands of years, stories had been told of the terrible Sorceress who'd given all her power to end the ancient world. But those were just stories. Now, new stars dot the sky - signs of Sorceress Jocina's power returning so she can finish the job.

For A’banna, these signs mark the end of her service to the Sorceress as priestess. Commanded to sacrifice a living being in Jocina's name, she can't go through with it. A’banna flees into the jungle, but the wide world is much different than she knows. Further, she’s being hunted by Jocina’s sadistic son and her monstrous creations. Nature itself seems set against her.

Bedel and Raynt, two of the Magical Affairs Commission’s elite agents and powerful essencers, might be her only hope. They've dedicated their lives to holding back the tide of Jocina's darkness, and preventing her inevitable return, but when they discover A’banna on the edge of death, all missions are postponed in an effort to protect her.

Might this strange, defecting priestess hold the keys to defeating the Sorceress once and for all? Or will she cause two of the most powerful remaining essencers to meet their doom for nothing?

Experience the start of a fantasy epic filled with magic, war, and characters that leap out of the audio. It's perfect for fans of Jeff Wheeler, Brandon Sanderson, and AC Cobble.

Always on the edge

I recieved a review copy of this book. The narration is excellent, as are the characters and story. The story itself sees the characters tied up in events almost beyond their control, with powerful enemies and an apparently unavoidable cycle that they struggle to break out of. This leads to a situation where at times the characters almost seem to lack agency, being instead drawn into the events.

This is a fantastic debut fantasy novel that brings to life a thriving mystical world full of wonders, the magic throughout the novel is well thought out, and the way the author has woven together the threads of the various storylines and characters within them is a credit to his imagination and writing. The only reason I didn’t give it 4 stars was there were a couple of sections that lost me a little but other readers/listeners may not have that problem.

Overall a fantastic read and I look forward to carry on reading the series as it progresses.

New author does a good job with developing a new fantasy series. and he has the best—Tim Gerard Reynolds—alongside him.

I received this title as a giveaway and I am glad I got the opportunity to experience this debut by Joshua Smith. I am amazed at the level of detail he fits into his world and it's hard to imagine he isn't a seasoned writer with dozens of books under his belt - simply amazing work.

The story simply wasn't my cup of tea. The magic system didn't sit well with me but that's personal preference. I am a simple creature and I found my brain working too hard to understand the fabric and the essences. There was a heavy dose of exposition and over-explanation early in the book but things begin to pick up and there is some fantastic action throughout.

Tim does a flawless job narrating and he was a great choice for this novel. I hope others have the chance to listen to this story as I am sure many will find it outstanding.

While Tim Gerald Reynolds' narration was excellent, I can't say the same for the actual story. I noticed a number of the reviews started that the book picked up after the prologue, which was far too long IMO (over an hour). Unfortunately I didn't find that to be the case. There was some interesting scenes and quite a few battles, but sadly the story just never grabbed me, which is a shame as I usually love epic fantasy. I was given a free review copy of this audiobook at my request and have voluntarily left this review.

Tim Greard Reynolds again delivers a fantastic performance that is complementary to the story being told
Josh Smith has delivered a intriguing new Fantasy world which the reader enters into fully formed.
Any exposition about the world is subtle and you gain understanding organically not with a big chunk of an info dump.
Eagerly awaiting the next one

I'm a sucker for deep and complex worldbuilding and this book has it and it's done incredibly well. The narrator was fantastic as always. I'd enjoyed this audiobook a lot.

I was given this free audiobook at my request and have voluntarily left this review.

Excellent world-building. Great characters. This felt like reading a classic bit of fantasy and is really impressive for a debut. Tim Gerard Reynolds is incredible as well. Highly recommended!

Reminiscent of the greats!

Talk about a book that can hold your attention for the long haul. Between Smith’s writing—seems new on the scene—which feels like he’s been tutored by the masters of epic fantasy, and TGR, who has a record for narrating the finest epics in history... this book is fire.

I’ve been begging for a new epic fantasy author to hit the scene who can carry the torch. Joshua Smith, is that you?

The narrator has done a brilliant job of trying to redeem this pitiful excuse for a book, but even his skills couldn't save it.

The author likes to write much more than is needed, I found myself drifting and thinking about other things and losing sections of the book. It was a bit boring the only salvation was the narrator.

Fans of epic fantasy have a new author to follow

For epic fantasy fans, this book has it all. Good guys trying to keep the evil elements of the world at bay, the bad guys working their magics to destroy life, and the development of memorable characters leaving the reader wanting to hear more. We're thrown directly in this world, with life threatening circumstances from the very start. Within all the nonstop action of the story, puzzles are interwoven, and evil plots are formed. So paying close attention is mandatory to acquaint yourself with this world, it's magics, politics, and our characters placement in it. Tim Gerard Reynolds is perfect with his narration, and I feel he was made for this story, as he is with Michael J Sullivan's work. Give it a try, as for me I'm ready for the next of the series.