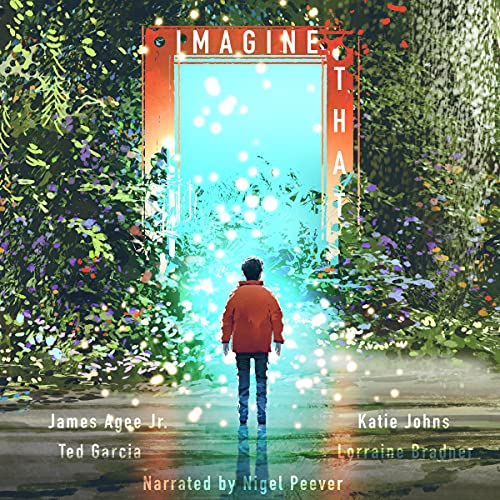 There is magic in the mundane, if only you look for it. This collection of four stories will have you taking a second glance at the world around you.

My World by James Agee Jr.
Finch has always known that his mother doesn’t care for him. Things take a turn for the worse when they are banished from the only community that he has ever known. With only himself to rely on, it is a matter of life and death.

Living History by Katie Johns
Those who fail to learn the past are doomed to repeat it, right? Sophie Westin experiences what they say about history, while she spends new year's grounded and has to write an essay on the 1920s for her English class. Dozing off before 2020, she wakes up in the early 20th century and makes a vaguely familiar friend for the day who helps her see that the era is not as bad as it seems.

Aunt Charlotte of Sheffield by Ted Garcia
Daniel is not excited when his mother forces him to spend part of the summer with his snobby aunt in her ritzy beach community. Things quickly take a turn during their visit when Daniel discovers that his Aunt Charlotte is keeping a secret. It challenges Daniel's idea of reality, and if discovered, could put himself and his family in jeopardy.

The Heart Healer by Lorraine Bradner
To everyone else, Lily was just a normal 15-year-old girl whose parents were genius scientists. Unbeknownst to others, Lily was a cardiac patient who suffered from anxiety and was going to require surgery to live. As her condition worsened, she struggled through isolation, as others began to see her non-normal side and avoided her. Lily was alone and scared, until one fateful day she came across a dog that changed everything. Join Lily in her journey to freedom, as she undergoes a strange adventure that ends up changing the lives of millions.

What listeners say about Imagine That

Really engaging stories, I couldn't put it down so it was done in a day. Fantastic narration as always from Nigel Peever.

well worth the read
all different and all enjoyable
nigel was a brilliant narrator
as usual!

Four short stories, one is better than the others.

This audiobook does quite well as an immersive experience with plenty of sound effects and music added to bring different scenes to life. The narrator, Nigel Peever, reminded me of how you'd imagine stories around a campfire. There are other voices in the book at times and I felt they should have been utilised more.

Please note that I wrote this review from an adult's perspective and that I really feel that this audiobook it probably best suited for children perhaps under highschool age. The first story was by far my favourite and I wanted to love the rest. I felt by compiling the stories in this order they put their best foot forward but left the rest of the audiobook as a slight letdown.

The first short story, My World by James Agee Jr. is an ethereal experience shrouded in mystery with intriguing details and an enigmatic style of story telling. As if existing in a dream-like state the story progresses at a good pace while keeping you guessing at what sort of world it is taking place in. It is the story of a boy, who is unloved by his mother and the unexpected trip he takes one night.

Unfortunately, after that you have peaked with the rest of the audiobook.

The second short story Living History by Katie Johns seems as if it has been lifted from a highschool essay. I found the idea unoriginal. This was the point I began to find the narrator's high-pitched "female" voice shrill and grating. It's the same voice used to portray young and female characters so it's not going anywhere. This story stereotyped an entire decade and ended predictably.

The third short story Aunt Charlotte of Sheffield by Ted Garcia again has the feel that it's conception was in a highschool homework assignment. Set in England, but for some reason using American English, this short story is set from the viewpoint of a boy on holidays with his parents. He visits his Aunt and her lowly assistant (who plays absolutely no roll in the story whatsoever). Although not entirely predictable this short story explores the mysterious environment that your older relatives' home's provide when your a kid.

The Heart Healer by Lorraine Bradner is the final short story in the audiobook. This book seemed to set up a completely different scenario to what it ended up being and not the the way of an intentional twist. It was almost as if different people wrote the first and second halves. I found some of the reactions of characters were unrealistic in this one. As well as that, there is unfortunately a trade-off with magical realism for vague, lazy, unimaginative writing.

Ultimately, I enjoyed the audiobook but I really feel I was not the target audience (however there is nothing to say it is a children's audiobook) and that it is better suited for tweens, except My World which probably suits all age levels.

I really enjoyed these magical short stories. This was a nice quick get away from life! Some of the stories were better than the others, but what really made them great was the narration and the sound effects. This is the first time I listened to a book narrated by Nigel Peever, and it won't be my last. He is fantastic and the voices he uses are great and he makes every character unique and the addition of the sound and effects in the background made it more realistic.

This audiobook has 3 short stories with a mystical theme. They are each amazing in their own way. Nigel Peever is an amazing narrator that brings each character to life. This is a good short listen for traveling or when you don’t have time for a long book.

I was given a copy of this audiobook in return for my unbiased opinion.

These were entertaining short stories with great narration. Nigel Peever did an awesome job bringing the characters to life within each story. There were sound SFX mixed in here and there which did not interfere with the story so they were value added. The stories were fun to listen to and kept my attention. These make for a great afternoon listen. Take a chance and enjoy them.

Disclaimer: My enjoyment of the narrator is based on my listening speed. I only leave 5 stars for books I've listened to or will listen to multiple times. I'll update my review if I listen again.

I requested this book from the author, narrator, or publisher in exchange for an honest, unbiased review.

The book is made up of 4 stories. The first one is the best. The second and third are average. The last one is above average. The narrator is very talented, but his voice doesn't suit the 2nd and 3rd stories. Still, his narrating ability almost transcends the mismatch. The music is a nice touch to the narration in general, but often of times, the sfx are too loud and overbearing. I usually listen through my car's audio system and sometimes listen on my phone. Whenever the sfx comes on, it overshadows the narrator's voice to the point where you can't make out whole sentences at a time. Still, it is a generally fun listen. Less annoying than Will Wheaton at least :p

Really enjoyed this compilation of short stories! They were all unique and intriguing. Narration of the stories as exceptional with added sound effects that made the stories so much more interesting!

This was an enjoyable collection of shorts, and an extremely well-produced audiobook. I particularly enjoyed the first and fourth stories for their content - ominous and existential, and touching and heartwarming respectively.

My World, by James Agee Jr. is the kind of story that says more by saying less. The gaps in your knowledge around the edge of the story make for a very compelling experience.

Living History, by Katie John explores an important, if predictable, concept - that history is rich with meaning and importance to our present lives if we are willing to engage it.

Aunt Charlotte of Sheffield, by Ted Garcia, follows a faily trip gone awry, giving us a bit of mystery.

The Heart Healer, by Lorraine Bradner is a feel-good story of a companion appearing at the exact moment needed, and a sweet way to close the collection.

Overall a lovely listen, great for an afternoon escape.

Imagine that has beautiful heartwarming stories with a touch of magic and a lot of love. I throughly enjoyed each story especially with Nigel Peever as the narrator he beings the characters to life and gives them personalities. I highly recommend this book it is magical and inspiring. This is my honest unbiased review. DO NOT MISS THESE STORIES ARE AMAZING.