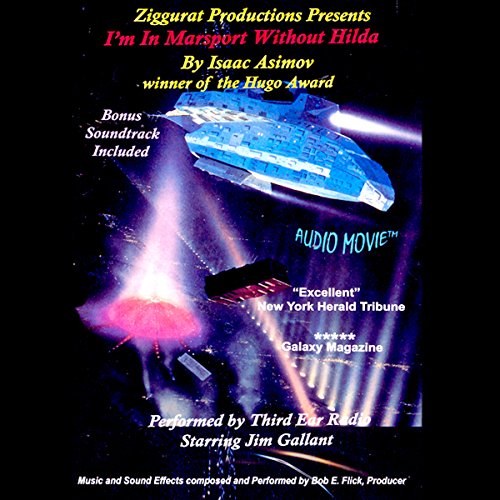 I'm in Marsport Without Hilda

By: Isaac Asimov
Narrated by: Jim Gallant
Try for £0.00

"It all began with my month's layoff between galactic service assignments. I reached Marsport for the ususla three-day stopover. Before landing, I received a spacegram from my wife, Hilda, saying she would stay and wait for me on Earth. So I called Flora and set a date.

"As I stepped out of the Video Booth, the first whiff of catastrophe nudged itself up to me. Rog Crinton said, 'Red Emergency Alert - come with me. Jack Hawk is dead. The galactic drug menace and his killer is on his way here.'"

What listeners say about I'm in Marsport Without Hilda

I bought this thinking I would get a range of stories, It has a drum and electronic music backing track that runs throughout and many many minutes are just tuneless musak. Do yourself a favour and buy the book, and read it. I cannot in all honesty recommend this. I can't seem to leave a no star rating.

Love Asimov! Loved the story. The narrator was good. However, I'd already been thinking that I could use a little less orchestra music with my short story, when, about halfway through the recording, the story was over and the next half hour or so was that same orchestral music. I kept fast-forwarding, thinking it had to be over soon and there would be another story. No--I was wrong. If I want music, I will buy music. I come to Audible for literature. At least I'm glad I only paid $4.95 instead of wasting a credit.

This particular production company (Ziggurat) seems to think that terrible music and sound might somehow make for a better recording - it doesn't. It was impossible for me to get past the first 10 min of this recording. Simply awful! I now check to see who made the recording avoid anything from this company.

If I could have gotten through it, the story might have been OK. But...

The story good. The 33Min of Sound effects bad!

The story Was well done and very enjoyable. Then it took a real nose dive. Nice for sound effects but not for just listening.

AND WHEN I LANDED THERE I WAS

I FELT LIKE THE LOWEST HEAL IN THE GALAXY
98% of this is 60's orchestral space music. What you read in the summary is half the story. This is mislabeled and should be under music. I like some music to start and finish a book, to help set the mood, but this was way over the top. Audible should just pull this off the shelves.

The story itself is only average. I am a big fan of Asimov, he is in my top five of favorite authors, but I really did not care much for this. The spaceman comes into Marsport and finds out his wife isn't going to meet him, so he calls his girlfriend. Most of the ten minute story is about his lust for his girlfriend.

This was the worst audiobook I have ever had the misfortune to buy! Do not buy this!