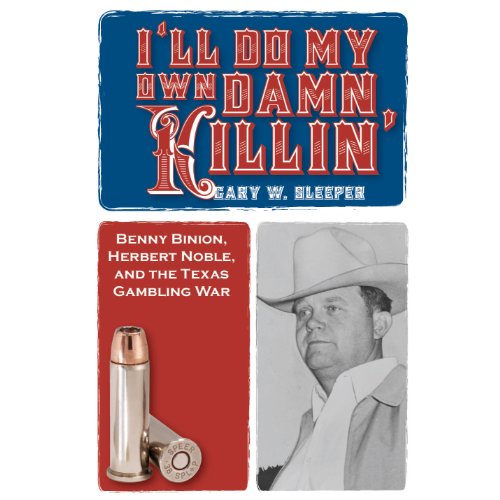 I'll Do My Own Damn Killin'

I'll Do My Own Damn Killin'

In the early days, before he founded the Horseshoe Casino in Las Vegas and became the patron saint of the World Series of Poker, cowboy Benny Binion was a horse trader, a bootlegger, and the "boss gambler" of Dallas and Fort Worth, Texas. This book traces Binion's rise to power in the Dallas underworld during World War II. By 1946, more than two dozen "casinos" operated illegally in downtown Dallas in hotel suites, and Benny Binion owned at least half of them. The cowboy's only true rival for gambling supremacy in Texas was his former partner, Herbert Noble.

For the first time ever, Gary Sleeper reveals the intricacies of the bloody feud between Binion and Noble, and their brutal war for control of Dallas and Fort Worth. Included are details of the 13 attempts on Noble's life, the tragic murder of his wife, and Noble's bizarre plot to gain revenge by bombing Las Vegas from a private airplane.

There was some historical information relating to the rough and tumble days of the 40's and 50's. Overall, the story was so-so. I was not an "on the edge of my seat" captive. The story could have been better developed. The narrator was ok. It's not a book I will read again or recommend to someone else.

What made the experience of listening to I'll Do My Own Damn Killin' the most enjoyable?

Just to know the facts about the start of the dynasty...

How casually Binion could kill his competitors....and vice versa.

The day Binion & a fellow conspirator planned a murder in downtown Dallas (where I live now) at a bank....and basically get away with it, and many more.

Pure facination how illegal gambling was tolerated in early Dallas, and what effect it had on Las Vegas....
What a charactor this man was.

Interesting, but not overly captivating

I did learn that gambling was mainstream long before Las Vegas and that Benny got his start and made most of his money in Dallas/Fort Worth. I didn't like that the book was wrought with supposition and the true facts were few and far-between.

Certainly did not go out with a bang.

I think the narrator was poor. I found myself focusing in mispronounced words or poorly-delivered phrases and missing the content. I was not impressed.

Do you think I'll Do My Own Damn Killin' needs a follow-up book? Why or why not?

No. Unless there's more from the UNLV interview that can be implemented, the rest was pure guess-work.