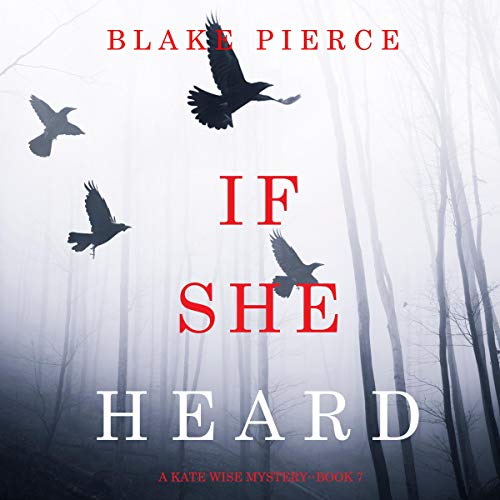 By: Blake Pierce
Narrated by: Quinn Francis
Try for £0.00

If She Heard (A Kate Wise Mystery) is audiobook seven in a new psychological thriller series by best-selling author Blake Pierce, whose number-one best seller Once Gone (Book One) has received more than 1,000 five-star reviews.

Two teenagers, home for their winter break from college, are found murdered in their hometown. There is clearly a serial killer on a rampage, and the FBI is stumped - but can FBI Agent Kate Wise, 55, still recovering from giving birth, enter his twisted mind and stop him before another girl dies?

An action-packed thriller with heart-pounding suspense, If She Heard is audiobook seven in a riveting new series that will leave you listening late into the night.

Audiobook eight in the Kate Wise Mystery series will be available soon.

What listeners say about If She Heard

Loved every second of it!!

This book is great I love it it was very engaging just like all the others I was eager to know what was going to happen next, this book is great for anybody who likes thriller and murder mystery.

At 57 years old, the once retired/recruited to the FBI Kate Wise has just become the miracle Mom! When she is finally sent out on her first case after giving birth she has a difficult time throwing herself completely into the case like she used to. She finds herself thinking of her baby boy. She also thinks in depth of all the mistakes she made with her now adult daughter. She remembers how her daughter felt neglected because her mother was married to the FBI. This book doesn’t say outright but hints that Kate may if not completely retired again, she will only be consulting on a very limited basis.
Quinn Francis does a very good job narrating.
HIGHLY RECOMMENDED.
If you found this review helpful please indicate so.
Thank You.

The whole series was well done. Kate is my hero and definitely too young to retire. I feel it is selfish of her daughter to want her home… Kate has talent and skills that are needed.