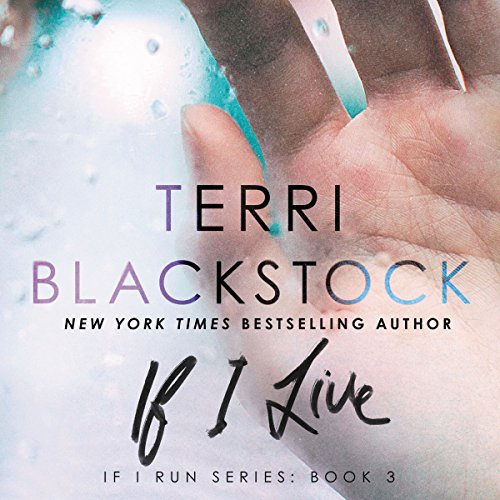 THE HUNT IS ALMOST OVER.

Casey Cox is still on the run after being indicted for murder. The hunt that began with her bloody footprints escalates, and she's running out of places to hide. Her face is all over the news, and her disguises are no longer enough. It's only a matter of time before someone recognizes her.

Dylan Roberts, the investigator who once hunted her, is now her only hope. Terrifying attempts on Dylan's life could force Casey out of hiding. The clock is ticking on both their lives, but exposing the real killers is more complicated than they knew. Amassing the evidence to convict their enemies draws Dylan and Casey together, but their relationship has consequences. Will one life have to be sacrificed to protect the other?

With If I Live, Terri Blackstock takes us on one more heart-stopping chase in the sensational conclusion to the If I Run series.

"Crisp dialogue and unexpected twists make this compulsive reading...." (Publishers Weekly review of If I Run)

What listeners say about If I Live

Loved it. I could not put it down. Yet another great series from Terri Blackstock.

Great outcome in story. maked uou feel their is hope in the woeld today. would recomnent all three books in series.

Couldn't stop listening and the narrator was great. Absolutely loved this series. Listened to all three books over a week.

The "If I Run" series could have been covered in one or two books. I feel like I wasted a credit on this last one in the series. It drags on even though it is the climax of the book series. The narrator was almost unbearable by the last book. I am so sorry to say that but her monotone voices at times sounded like a computerized voice and I was sometimes confused as to who was speaking because some of her voices were the so similar. I have always liked Terri Blackstock in the past but have not read her in quite some time. The romance part of this was well... a bit sappy but maybe now that I am in my 60's I am uninterested in a thriller that has romance. The gospel message in the series was clear and for that I am grateful but it may be a turn off to some. The hope and change for the two main characters comes through a personal relationship with Christ.

Last of the Trilogy

1. If I Run 2. If I'm Found 3. If I Live Female fugitive finding Faith, fulfillment in a frantic finale

when I first started the series I wasn't too sure about the book. but now that I have made it through the entire series, I really enjoyed it. I will look for other books by this author.

MUCH BETTER than Book #2

I finished this one yesterday and was pleasantly pleased with the narrators improvement over the 2nd Book in this series. Much Better! I almost gave up during that book, but to anyone that’s thinking of doing the same, hang on....she does improve!😁. The story line is a good one, and I’m glad I continued. In all honesty, I would still had preferred Renee’ R., but it was still a good story & I’m glad I didn’t quit!

I loved this series and I thoroughly enjoyed this book. The narrator is a little wooden and robotic sounding most of the time, but the distraction is minimal because the story is so good.

We could hardly hear stopping the book each time we needed to. Our family is LEO. Terri did her research.

Each book is great! One is not better than another. Every single one are nail biters. Loved!!!