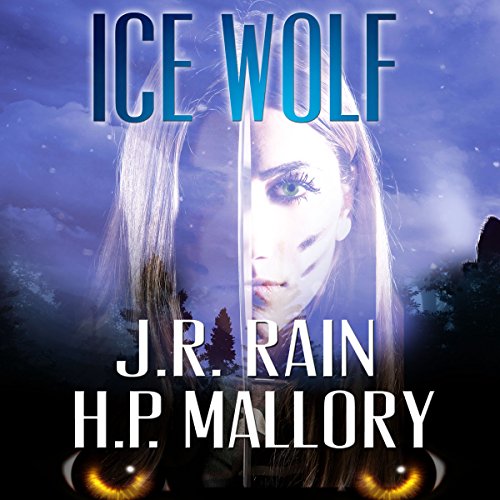 Ellie Matthews is the new police chief in Hope, Alaska. An experienced homicide detective, she's running from a past that haunts her. One bullet changed her entire life and set her on a career path that collides with native lore, shape-shifter legends, and wolves.

In Ice Wolf, a hunter stumbles upon a naked body. When Ellie and her deputy retrieve the frozen corpse, he's got a silver dagger in his chest but no ID. It's Ellie's first homicide case in Hope and she aims to solve it. But even stranger things happen and this murder investigation will be anything but routine. Ellie doesn't want to believe the forensic evidence, but there's something creepy about the John Doe victim. There's no way that she'd walk away from this case, but maybe she should run.

The prime suspect is Alex Johnson, a bounty hunter who knows a lot more about shifters than he's telling. But is he crying wolf? Things could get downright steamy with Ellie's number-one suspect, who may be her only ally in town. But can this beauty trust a beastly hunk who's under arrest?

It will take all of Ellie's homicide investigation experience to track down the killer before the killer finds her first.

What listeners say about Ice Wolf

It was an OK story. I did not particularly like the main character. She lacks confidence and trust in people. Constantly afraid that someone will trick her. Most of the story is very detailed. In the end the story feels rushed without good completion.
The great part was the narrator, she made these characters feel alive. She managed to make different voices for different characters, especially Alex's voice, it was very sexy :)

MADE ME A FAN!

This is my 1st paranormal romance book and it did not disappoint. I enjoyed the main Characters and their chemistry. First there is Maddie, a new police chief of a little town called Hope. Then there is Alex, a tall, dark haired and handsome bounty hunter. At first is seemed like it was going to be a love to hate relationship but it evolves into so much more. Would love for there to be a follow up book as it ended so quickly. Enjoyed Valerie' s narration, it was smooth and well done.

I really enjoyed this easy and enjoyable book filled with easy banter and a good story line. The characters were down to earth and easy to like and the dialogue was witty with just the right touch of sarcasm. The narrator was fantastic, making it more like listening to movie dialogue than a book. Very fun book!

I expected a better story

I had high hopes, but the story didn't quite do it for me. Not sure what to think, it seems unrefined. Ellie is a weak woman in my books who is making so many wrong moves, just wanted to smack her at times. Her investigation is lacking and getting sidetracked easily by Alex who was so patient with her... arresting him... then going out to dinner?
Loved Ms. Gilbert's narration, she has an awesome voice, versatile to fit each character. The reason I chose this audiobook.

Good, but it just felt unfinished

The narrator was great! I laughed out loud a few times and I don't think I would have just by reading.

The book itself fell short with me. It just feels unfinished. This book has the potential to be a great series.

Beware the bump in the night, you may not survive

I haven’t read any work from either of these authors, but they certainly put together one nail-biting story. Narrator Valerie Gilbert, of whom I’ve listened to many of her works, does a fine job with the telling of it. She narrates an assortment of genre.

The story is told in first person, in the voice of the new chief of police, Ella Matthews. From the beginning sentences, a body is found, stabbed in the chest, already providing a gripping scene. Oh, did I mention it is naked? Yep, naked with boots on.

Ella wants to succeed in her new position. She's a bit like a fish out of water. She knows nothing about these whereabouts and people aren't real open. She’s also worked as a psychologist on the criminal scene, keeping lunies where they belong--behind bars. She’s smart and feels she can take care of herself. That is, until…

Alex Johnson, a man from the local Indian tribe, happens to be around when Ella decides to go for a walk to think things out – weird stuff that just can’t be happening. Is she losing her marbles? Maybe not, but this walk just about had her lose her life. Luckily for her, Alex just happens to be there.

Ella questions everything. Yep, she’s chief of police and things don’t add up. Heck, Alex, even though he happened to have been there for her, he could have murdered the naked victim found in the snow. She couldn’t seem to control her attraction to him either. Dang! So, distance was the key, but she needed to find out more about the man. She had to man-up and lose those hormonal inclinations.

Ella’s investigation leads to more danger, and apparently, more criminals afoot, who have the same common denominator – getting what they want, or should I say who they want?
If you enjoy scary, werewolves, delusions of lunatics, and narrated in a beguiling way, don’t miss this listen. I enjoyed it very much--it made my night!

I loved this story and the combine writing between H. P. Mallory and J.R. Rain gets a very good rating . It's a refreshing change of direction for the story telling about werewolves.

This book okay but for me, it seemed a few areas were a little hard to believe given the nature of her job. In addition, there were some areas of the story that I felt needed to be elaborated on.
The narration was terrific!!

The Narrator became my sleeping pill.
The performance was like watching a golf game on t.v.

Not a Fan of This Story

The only type of person that I think would enjoy this story is someone whose never read/listened to a story before. I seriously have no clue how anyone would have given this story five stars.

This was a horrible story. It could have been good but the author focused on areas that ended up being really stupid (Examples/questions below). I swear Ellie, the sheriff, had no clue what she was doing. How did she become a sheriff? The whole time she acted very immature, clueless, or just plain stupid. Stupid: wondering why he prefers to be alone (mind reader, hello); or the whole encounter involving the corpse/werewolf; or even better, when Ellie asks Alex why he isn’t upset about what’s happened to Donovan. (Why would he be? Had she not listened to anything Alex has told her up to that point about the two of them?). Immature: constantly thinking about Alex’s body and arresting Alex.

Would you ever listen to anything by J.R. Rain and H.P. Mallory again?

I've never read/listen to either of these authors, so I'm not sure.

Which character – as performed by Valerie Gilbert – was your favorite?

Although I'm a big fan of Valerie's, I wasn't a fan of any of the characters in this story. Ellie was too stupid for my liking and Alex, the only other character really, was just eh. There was nothing to any of them.

The fact the whole town consisted of werewolves was interesting, other than that it had no redeeming qualities.

Why was Donovan’s tongue removed during his autopsy? I’d never heard of that before. I
thought autopsies were only performed with questionable deaths or when family requested it. Donovan’s ‘death’ seemed pretty obvious given the knife was still in him and there was no family around to ask for the autopsy.

One of the most important questions for this story was, ‘Why did the Sheriff NOT follow ‘the corpse’? That infuriated me so much because it was so stupid. She’s telling herself that it was just a joke and the corpse was actually a guy in costume. Or maybe it was somehow real and no one would believe her. WHY DIDN’T SHE FOLLOW IT/HIM THEN? That seemed like common sense to me. The fact that she kept going on and on thinking it was a prank was just too much. Even if she were new, she’d been there for several months, so why would they have tricked her now and not when she first got there? Or why would Alex and his brother, both of whom she’d never met, prank her?

The second question was regarding why she arrested Alex? Seriously? For what? Because he was annoying? And it was more important to arrest him rather than look for more clues about the corpse?

The third question was in regards to how she learns that Alex can read her mind. So why did she keep thinking about how attractive he was, his muscles, his ass, his c*ck/sausage; yet, she then gets mad when he answers questions or makes comment about what she’d been thinking. After Alex tells her that everyone in town is a werewolf, she ends up dropping her hot tea, and the first thing that pops into her head is…Alex’s looks! Of course, I guess at that point, I shouldn’t have been surprised. It was at this point that it was impossible to believe she was a cop, much less a sheriff. Right here was when I started contemplating whether I wanted to continue this story or not.

The fourth question goes along with how sleeping with Alex was more important than finding the person who tried to kill Donovan. I’m usually all for a good sex scene, but I could have cared less about the one in this story. Why? Because Ellie is so stupid! She does the opposite of what any sensible person would imagine her doing. I already knew the two of them were going to sleep together, no mystery there. It’s funny how she’s constantly talking down to Alex and negative towards him, minus his ‘good looks,’ yet, she had no problem sleeping with him. And still doesn’t totally believe him?

Why did I have a hard time believing Ellie was able to sing Taylor Swift songs in her head while she was talking to Coco?