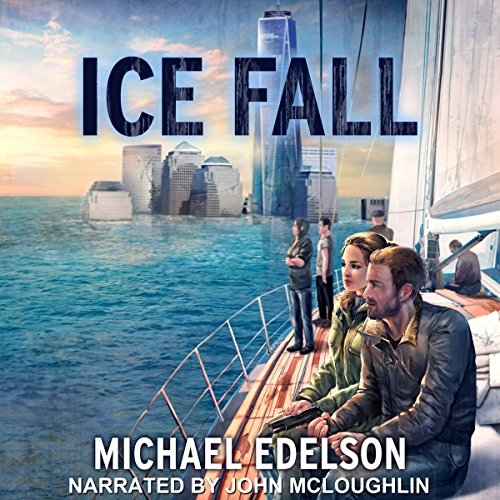 By: Michael Edelson
Narrated by: John McLoughlin
Try for £0.00

After losing everything in a bitter divorce, Peter retreats to a secluded cabin in the Catskill Mountains, where he is trapped by earthquakes and months of unrelenting snow. Just as he is convinced he is the only survivor of a mysterious global cataclysm, he meets a woman seeking refuge from a past she won't reveal.

Her arrival rescues him from unbearable isolation, but when the snow finally stops and her secret catches up with her, Peter is forced to choose between saving her life and following his conscience.

His decision sends them running for their lives and searching for answers as the melting snow reveals a world unlike anything anyone has ever seen. Together they will learn not only what caused the greatest disaster in the planet's history, but that the worst may be yet to come.

What listeners say about Ice Fall

Different. Was good story. Too much poetry.

Was good story. Kept getting put off by all the poetry and sayings at the start of every chapter. But persevered. After about the 15th chapter just kept skipping 15 seconds. I know the writer meant well. But i just wanted to get to the story. Sorry.

I don’t always like US post apocalyptic books, too many guns and mindless violence. However, this book was much more thoughtfully done and looked at a cataclysmic event with an interesting and coherent plot line, with likeable characters.

Well worth a listen.

Thank you for a few hours of entertainment. I listened to this audiobook on holiday in one day.. With only mealtimes as a break. Kept flowing very nicely with some tense moments, enjoyed it that much I have ordered Sead off the same author from Amazon Kindle.. Bit disappointed that they are not offering it on Audiobook at reduced price.. So I will have to read only on this one... Hope it's as good.

I am a fan of this kind is genre and have read many.
This is a good idea, “overly” written
The narration does it no favours

Excellent post-apocalyptic book! Something happened that caused a global catastrophe. There were earthquakes, months of snowfall, and severe flooding with sea levels rising over 400 feet! This may sound like something similar to Water World, but I assure you, it isn't. I'd definitely like to check out more by this author. Excellent narration by John McLoughlin!

hard to put down

i already read this on kindle a while back and loved it, but it's better now cuz i don't have to look at words..
nice post-apoc fiction with a scenario that i don't think i've seen the genre touch on all that often(nice break from the nukes and zombie outbreaks). plenty of action, romance, heroics, tension and all that keeps a good story going, while still keeping it down to earth at a halfway mellow pace, which helps extraordinary situations stay believable and gives a chance to relate to the characters.

i hadn't heard a John McLoughlin narration before this, but i think he's made it into my very short list of narrators i enjoy listening to. good performance and sound.

This is a genre that has a great many works that fail to meet even a basic standard of literary quality.
Ice Fall meets and surpasses any standard. The writing is eloquent and yet highly engaging. The characters fight their individual demons while the story moves forward in a believable manner. Many books in the post-apocalyptic arena require the reader to exercise their suspension of reality skills to such a a degree that the story becomes disengaging and then tedious to continue. This does not.
The characters are well defined in Ice Fall and the reader is constantly being drawn into their world. The story line is well-thought out and explained brilliantly.
Amazing book and I look forward to many more from this author!

Time to live this awesome listen .

This audio storie provided a great surprise of a great listen . First time I listened to the author , who writes fantastic and the narrator, John , who’s voice was strong , clear and did the characters fantastic. .

What happens when your stuck in the mountains for a long time and with no where to go .

Hero is Peter Peter has some personal setback . He is also suffering from a divorce. . He feels useless
Peter tried for the Navy seals but wS turn away .
Peter has been in the mountains for a long time . He notices that there is no one around for a very long time . He has to learn to survive without every day necessary. Back to nature.
A strange women shows up half dead , but Peter nurtured her back to heath .
He doesn’t know that earthquakes and total waves eliminate everything. When more people show up that’s when Peter leaves the truth .
Grab it and see how Peter handles the catastrophe.

John was a great narrator. His voice was strong , clear

Such a great book. So entraining I can’t say enough about it! Very well done!

Wow!! This book has a very interesting premise. It is an easy read. I love the main characters revelation in the end. Great book! Thank you.

This book was outstanding. I really loved the spin the author used in how the world was destroyed. This twist was so different than anything I have read before this. There was something always going on. The narrarator was awsome and just brought everything to life. I felt likeI could see and feel exactly what he was reading. lots if depth and emotion used. Great book to add to your collection.

it was great loved the book great story. stayed up way too late trying to finish it. hard book to put down

Finished in under a week! loved it! Pacing was exellent, plot sucks you in and the characters are exceptional!

Michael Edelson has put together a very engaging story. The characters are well developed, making you genuinely care about what happens to them. The plot is believable. While some sections are heavily laden with science, I felt it did not distract from overall story. The ending is satisfying, if intended as a stand-alone; however, I’m hoping there will be a sequel.