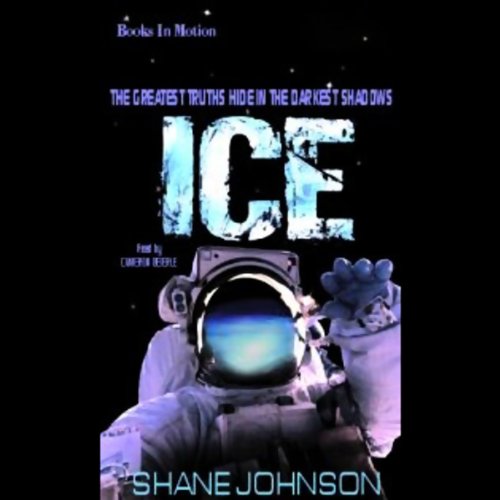 February 1975. Apollo 19, the last of the manned lunar modules, has successfully landed. Exhilarated and confident, Commander Gary Lucas and Pilot Charlie Shepherd set out to explore a vast, mysterious depression in the surface of the lunar South Pole.
©2003 Books in Motion (P)2003 Books in Motion

"Johnson's credentials as a spaceflight historian and design consultant for the HBO miniseries From the Earth to the Moon are evident in the authentic details that characterize this intriguing Christian suspense thriller." ( Publishers Weekly)

This novel starts off slow, in narration and content, but quickly captures your attention. The end result is thought provoking. It is well worth your time.

I enjoyed this book. This novel displays a lot of research by the author and he does a great job of setting an authentic tone to a story which centers around NASA in the mid 1970's. It is an alternate history novel and I found it fun to hear how the Apollo 19 mission might have turned out. I was interested from the opening scene until the explanatory climax. As an added bonus, there is an Author's Note at the end of the book which gives some interesting insight into both the novel's factual and speculative details.

I found this book under the Audible category, "Fiction: Religious & Inspirational" so I was not surprised by the Christian theme of the book, though I would personally stop short of calling it "proselytizing." One of the minor storylines does involve the spiritual introspection of a central character, Logan, but this does not develop prominence until the end of the book. Frankly, I enjoy listening to well written science fiction novels which have Biblically based, Christian ideas. Good authors such as Shane Johnson are few and far between.

I gave the audiobook 4 stars because I found the narrator to be a bit choppy as he spoke. It took several hours to get used to his staccato tempo, so I could never quite shake the feeling that I was being "read to." I always listen to the audio book sample before buying, so I was prepared. I suggest that prospective buyers do the same. Overall, however, I highly recommend this book to sci-fi lovers - especially those of the Christian faith. This is an entertaining ride with a twist ending that most readers will never see coming. Give it a chance; I don't think you'll be disappointed.

I agree it does start a little slow, however you will be surprised by the ending.

I like it, but I can't really recommend it

I really enjoy this one, but I can't really recommend it - I enjoy it each time by focusing on the cool space scenes, shutting out the unrealistic and overly maudlin Earth stuff, and stopping the book just after a professional astronaut makes a really dumb move that is too much for me to swallow. There's an interesting sci-fi exploration story here, but it's buried in a heavy-handed Christian tale that departs further from reality the more you listen to it. Of course, YMMV - I can only say that MY enjoyment is highly conditional, and based on that, I can't recommend it.

I have this story in print and was eager to hear the audio book, as it's one of my favorites. It is a very well told story, with an interesting twist on history and the Bible. A great "what if" story. However, the narrator was almost painful to listen to. He has a very gravelly voice, and it didn't feel like he was putting much effort into giving the story life. I hope that a better production will be made available. If so I will definitely get it!

Fair warning there is a lot of christian thought in this book
I had a great read. A little out there(pun intended) but a great CHRISTIAN S.F. BOOK.

Yes, because it's quite different and has a cool ending.

What was one of the most memorable moments of Ice?

How it ties into the book of Genesis

If you could rename Ice, what would you call it?

Back to the future

Religious Prosletyzing in the guise of Fiction

Don't buy this book unless you want to get endlessly hammered with CHRISTIAN prosletyzing. It could have been a good story without the over-the-top christianity shoved down the readers throat. Save me from the bible thumpers.
I had to give it one star because the software won't let you rate it lower, like -2.