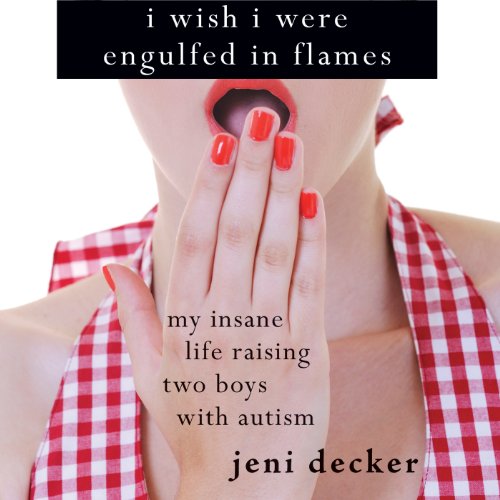 I Wish I Were Engulfed in Flames

By: Jeni Decker
Narrated by: Tess Malis Kincaid
Try for £0.00

When an audiobook is titled I Wish I Were Engulfed in Flames and the opening chapter is "Tickling the Wiener", listeners know they'll be in for a hilarious ride. Jeni Decker, a self -described "roly-poly, Reubenesque bon-bon of a gal", is just trying her best to keep her household running smoothly with her two boys at opposite ends of the Autism spectrum and a husband who's more at home hunting than sweeping. With a satirical and sharp performance by narrator Tess Malis Kincaid, this memoir from Decker provides laughter and inspiration for all members of the family.

The down and dirty world of one autism mom's journey - from sex-ed to Santa Claus.

Jeni Decker is five-foot nothing and one hundred and [redacted] pounds - a self-described roly-poly, forty-something, Reubenesque bon-bon of a gal, often called cute but never sexy. She has two sons with autism on opposite ends of the spectrum (Jake and Jaxson), a husband who prefers hunting to household chores, an Australian Shepherd named Sugar, and an albino frog named Humbert Humbert. This is her story - a brash, personal, and sometimes shocking memoir of one woman’s determination to raise two healthy kids with autism and keep her sanity in the process.

It’s not always easy. Between “poop” incidents, temper tantrums, and the “helpful” advice about parenting from her fellow citizens in the grocery store, Jeni often finds herself wanting to throw something. With chapters like: “Tickling the Weiner”, “Why I Hate Pokemon”, “Santa: Give It a Friggin’ Rest, Already”, and “Oprah’s the Reason My Kid Thinks I Want to Drown Him in the Tub”, I Wish I Were Engulfed in Flames also includes mini-chapters written by her eldest son, Jake.

Listeners looking for laughter and inspiration will find it here aplenty, along with tons of surreal anecdotes that will have you either shaking your head in disbelief (for those unacquainted with the world of autism) or nodding with recognition (for those who are). As Jeni says, “I developed a new ‘normal.’”

What listeners say about I Wish I Were Engulfed in Flames

I have felt like this mom on numerous occasions.

I love the humor and dry wit of this mom as well as the clearly fierce love she has for both boys. Her son Jake has so much in common with my son with autism that I may be somewhat biased; because I loved hearing someone else dealing with things I feel very alone in sometimes. From the haircut hell, to the Santa list asking for a grappling hook (same!), I loved it.

Great to know I'm not alone.

It is wonderful to know that someone else has similar crazy experiences.

Have re-read many times.