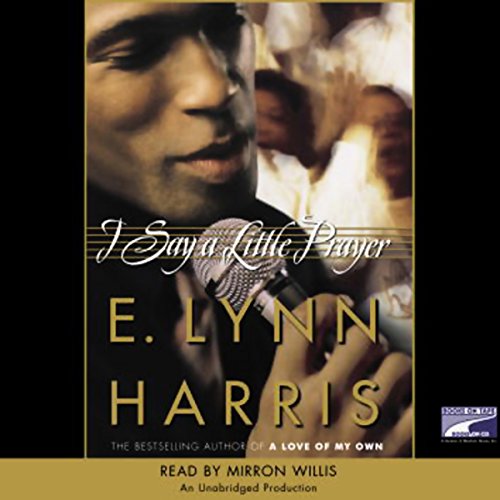 I Say a Little Prayer

Best-selling author E. Lynn Harris is back with another sexy, shocking, and immensely satisfying novel that explores some of today's toughest and most timely issues.

Chauncey Greer is the owner of Cute Boy Card Company, a thriving company in Atlanta. As a teenager, he was a member of a popular boy band, but left in disgrace when word got out that he and his band mate D were more than good friends. Chauncey is a free spirit, on the brink of 40 with a body admired by both men and women. Not into being categorized, Chauncey's been known to hook up with men and women, but now in the age of the "down low", he's found that women ask too many questions, so he's just focusing on the fellas.

After one too many bad dates, Chauncey finds himself in church where the minister's message inspires him to follow his dream of a singing career once again. Although he's lost touch with D, as he starts writing songs his thoughts inevitably turn to his former lover. Chauncey's powerful performance at the church earns him a standing ovation and an invitation to participate in an upcoming revival. But Chauncey soon discovers that an ambitious fundamentalist preacher plans to use the revival to speak out against gays and gay marriage.

Feeling angry and betrayed, Chauncey and other gay members of the church decide to take a stand against the church's homophobia by staging a "Day of Absence" when all of the gay members and their friends and family stay home. Everything is going as planned until D appears on the scene and Chauncey has to confront his past and make some hard decisions about his future.

I Say a Little Prayer is filled with the delicious plot twists, humor, compassion, and up-to-the-minute controversy fans expect from their beloved "E. Lynn". Harris has returned with another gem of a novel that will rocket to the top of best seller lists nationwide.

What listeners say about I Say a Little Prayer

I read a biographical book of Harris' and it was good, but this book is the stuff of poor, pathetic, a little anti-white, but that is not the worst part--the contintual rationalizing (or thinking he had to which was worse) for his super religious constantly bragging about his "notches"--

plus this dreck is the most simplistic writing at maybe the 4th grade level. It is like the words from a boy pretending he is a man explaining and apologizing at the same time what his sexual preference(s) are,

but there is no depth or feeling--an author in love with himself and his appendages--dead writing--plus if I heard one more time how he is "so gorgeous" (yuck)--enough-finally I erased the book half through on "800"th gorgeous,

I loved Queer as Folk--and enjoy the reading in this genre--but this book made me sick---plus I wanted to love this book. Sad, plus a waste.

I really do not where to start; the writing is just bad. Even though E. Lynn Harris tells an interesting story, the trite character descriptions, superficial references to material items, and tedius decriptions of a character's every movement make listening to this book extremely difficult. You just want to say, "Get on with the story, why don't you! How insignificant was that!" I could not imagine if I had to sit down and read the book; I'd want to slit my wrist. But, the most fustrating thing I find about the writing is that the characters are decribed as food items. For example, one character was decribed as having the skin color of a "toasted croissant." It seems that Harris loves describing characters as mocha colored, almond colored, honey colored, dark chocolate. These descriptions are the best this writer can conceive in terms of decribing his characters and obviously are his definition of beauty, not to mention his obsession with characters having honey green or grey eyes. I find this is so sad, because it is 2006, yet he still has the "light skinned, hazel eyes, and good hair," as the true definition of African American beauty, mentality. However, aside from his plantation ideology, the writing is just bad.

Because this author spends so much time on trivial descriptions, he makes what could be a good story boring and never completely develops the story. As a result, the ending is drier than "burnt toast."

I love the Author and Narrator

The Authors picture written in story form brought to life by the narrator... I absolutely love the rendition of this book. The change in voices are amazing. I can picture each one with every switch. They should definitely keep him doing all of E Lynn Harris Books

I have read books by E. Lynn Harris before, this one was OK, I expected a little bit more erotica, but I enjoyed the characters and the storyline.

I love this book, I read and reread this book over and over again. I even listen to this author more than once and love how he makes each character of the book stand out. I love this author and would like more people to read his books because it's isn't about just gay sex but love.

All I can say is "He's done it again" - if you don't get it then you're not a true fan. I have everything he's ever written and this book definately makes the mark.

love this book so much. This book is a wonderful.

I really do love this book, but I think you should really have and open mind.

What made the experience of listening to I Say a Little Prayer the most enjoyable?

What was one of the most memorable moments of I Say a Little Prayer?

The twist - who was sabotaging whom and why. Also the sensual narration of the intimate sexual encounters.

Have you listened to any of Mirron Willis’s other performances before? How does this one compare?

If you could take any character from I Say a Little Prayer out to dinner, who would it be and why?

Chauncey is an attractive, considerate, entrepreneurial, but down to earth type of guy, who I feel would be entertaining, and with whom I would have enough in common to have a delightful and lengthy dinner conversation.