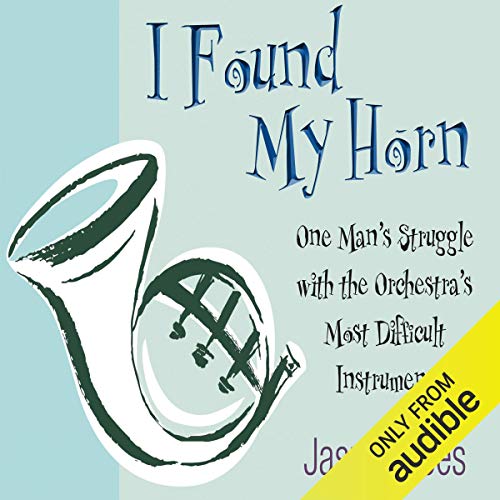 I Found My Horn

On the threshold of 40, Jasper Rees fished his French horn out of the attic and, despite limited ability, sets himself a near-impossible target: to stand up in front of a paying audience in 12 months’ time and play a Mozart concerto. Alone.

This is the inspired story, not only of a midlife rethink, but also of man’s first musical instrument, and its journey from the hunting fields of aristocratic France to Sgt Pepper’s Lonely Hearts Club Band.

Along the way, Jasper asks every major horn player in the world for advice as he prepares to stand up in front of a packed auditorium and perform on this notoriously treacherous instrument. They all say the same thing: Don’t do it!

What listeners say about I Found My Horn

Don't grow old with your dream just a dream!

Calling all amateur musicians! I dare you to set your goal and pull it off. Go through the pain barrier and do the work, no regrets! As a violinist without a clue re French Horn, I was fascinated to learn close up about this instrument and its challenges. We have all known the agonies of nerves on stage when we just can't play what we have mastered, but Jasper decides to summon all reserves and show his expert audience precisely what he has achieved. The ensuing thunderous applause is so unexpected to him and is a marvellous moment for the listener, as we have lived through every agonising moment with him. Thank you Jasper Rees for blazing a trail which I am sure will inspire many more, hesitant musicians, to follow in their own musical journeys. Now I am going to listen to the Mozart he so bravely performed, once again, with new insight!

There's a better use for your Horn, Jasper

The idea behind this book is sweet as a nut, and the characters brought in - especially Dave Lee, Champion Horn Player, are given fully credit. However Jasper himself comes over as a singularly arrogant faux fool, eventually revealing his basic character flaws in all there glory.