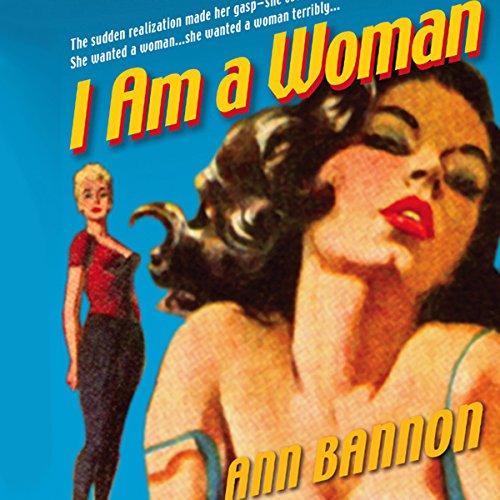 I Am a Woman

Lauded as the “Queen of Lesbian Pulp” for her landmark novels of the 1950s, Ann Bannon defined lesbian fiction for the pre-Stonewall generation. Following the release of Cleis Press's new editions of Beebo Brinker and Odd Girl Out, I Am a Woman finds sorority sister Laura Landon leaving college heartbreak behind and embracing Greenwich Village's lesbian bohemia. This edition includes a new introduction by the author.

“Shameless tales of wanton dyke lust are finally unveiled!” ( Out)

What listeners say about I Am a Woman

The second book we continue with the lovely and shy Laura she end's up in the village like a good little lesbian and drama ensues ,We meet Jack Mann and fall head over heels for him but he's gay so what you gotta do ,we are also introduced to the infamous Beebo Brinker ,Ann Bannon the writer intro's all her story's and I have found myself looking forward to them , she wrote these stories in the Fifties and the time's can be hard to get your head around but that just made me love it even more.

The story gets worse before its better I hope!

Only if they are interested in what happened to Laura from Odd Girl Out or the first book with Bebo Breeker in it. Because Laura is a fool in love with a straight girl in the 1950's and you know it will end badly for her, why can't we get a happy lesbian story where the lesbian is not the butt of the joke and so full useless drama it is just tiresome, Laura's behavior is crazy and they make drugs for it now..

Laura would get the girl, they would live happily ever after, the girl would be trill and throw herself at Laura and tell her boyfriend to go jump, He was a jerk anyway. Laura was a better caught. Laura would impress everyone at work with hard she works, and she would not have down spells were she got no work done, Even though Susan over heard talking on the phone about her home situation with her roommate/lover to her best friend Jack Susan would still befriend Laura and be her work buddy and though she suspects Laura's gay it would make a difference to Susan though she very straight And the End of the story would have Laura and her new girlfriend helping Jack kick his useless boyfriend out the door and introducing him to a new cut nice guy.And Jack helping to dump Laura's girlfriend's boyfriend off the docks or someplace close to hell. ,

Could you see I Am a Woman being made into a movie or a TV series? Who should the stars be?

Laura would be a good role for Meryl Sterp about 10 years ago, or Glen Close, Someone who can do flaky drama,, Almost like a soap actress, Maybe Susan Lucci. Jack should be played by Neil Patrick Harris, Laura girlfriend should be played by Wynna Ridder, Or Jennifer Lawrence/, kate Beckensale, Not sure who should be cast as Susasn

The story was so frustrating for me, Not all Lesbian are erratic, Stalking woman they have crashes on, There work doesn't suffer because they get a crush, and the whole world doesn't end with one bad relationship, The story off no hop to the newly come out, and to us old timers, well it just makes me mad, Beebo was a perfect date and she just insulted her really bad. The speak she gives Beebo near the end is an insult. and nor does it add to the story. ,

The second book in the five-book Beebo Brinker series. This book, also with a newly revised foreword by the author, appeared in 2002 re-published by Kleis Press and also remains very popular. This book sees Laura leaving school, going back to Chicago to live with her father and work at a job he found her, only to leave his house forever after a year because he is so abusive to her. She comes to New York and in particular to Greenwich Village in 1959. Bannon indicates that she was interested in pursuing the butch-fem theme so prevalent in the 1950’s. Laura moves in with another girl, gets a job as a receptionist for a radiology clinic, and meets a good friend of her roommate’s friend, Jack, who is gay and begins to introduce her to the gay scene in New York. Laura has all the tumultuous experiences of falling in love with a straight woman, being pursued by Beebo Brinker, a very out butch, and confronting her father. This book, also well written and well narrated by Kate Rudd, moves us along in Laura’s saga and also does not seem dated to many of us today.