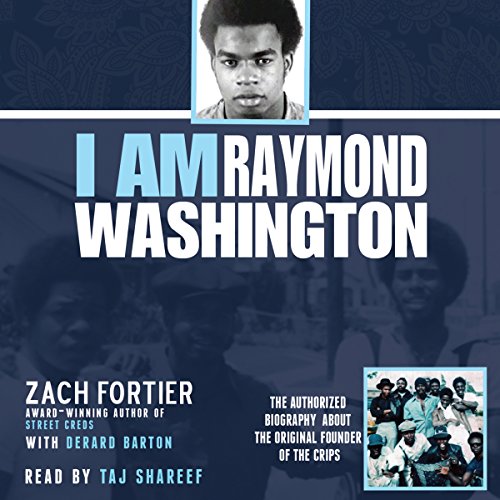 I Am Raymond Washington

I Am Raymond Washington provides the listener with an unprecedented look into the life of the founder of the Crips. Forget everything you have been told about who started the Crips and why. Most of it is wrong - very wrong. Welcome to the only authorized biography of the undisputed founder of the Crips.

Filled with interviews of friends, family, and acquaintances as well as people who knew and grew up with Raymond Lee Washington. Don't look here for horrific stories of gang violence and crimes committed by gang members; that has been done before. If you are looking for a factual and intuitive look into what made Raymond Washington unique on the mean streets of Los Angeles, this book is for you.

This book is filled with stories and eyewitness accounts of those who knew who the real founder of the Crips gang was, looks at what he represented to the people who knew him, and hopefully explains why his name is still spoken on the streets of Los Angeles with hatred, fear, awe, and reverence.

Entering the world of Raymond Washington with an open mind was difficult for me, but eventually the story of who he was as a leader, warrior, tactician, and mentor became clear. Hopefully it will become clear to the listener why the gang was so successful and how an apparently unremarkable 15-year-old kid in the fall of 1969 would sit down with his best friend and form what would become one of the single most successful yet feared and hated gangs in the world: the Crips.

What listeners say about I Am Raymond Washington

some useful information but lots of the same old

ground covered here is good... but lots of the chapters seem to repeat information. overall a decent read

Great Story and Even Better Narrator

Great review. Accurate accounts of Washington and how the gang started. Greatly enjoyed the read.

I learned a lot about my native Los Angeles and what happened before me. I had no clue about the Raymond Washington and BGF issues and will research this more. I finished this book in two days, very informative and engaging.

The Vietnam War did not end until the brave reporters gave the general public the important truths of what that war was doing to innocent sons and daughters of grieving parents back home. The raw details struck enough hearts that people went into action to put the war and the killings to an end. Important truths end wars. Nipsey Hussle's demise flashed through my mind listening to the journey of Raymond Washington. Great read! Gonna buy the book and make my grandsons read it. Thank you to everyone who survived and told this story so that others may also survive the brutal deadly streets of Los Angeles. March 31, 2019 was a severe blow to the collective Black psyche. End the L.A. wars!!!!!