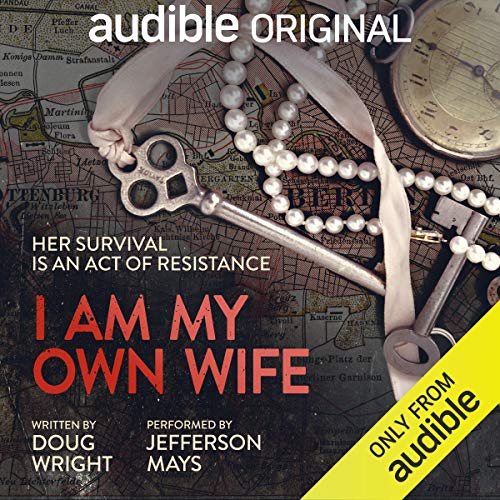 I Am My Own Wife

This riveting Pulitzer Prize and Tony Award-winning drama tells the fascinating, real-life story of Charlotte von Mahlsdorf, a transgender woman who managed to defy insurmountable odds. Based on interviews conducted by the playwright, I Am My Own Wife takes us on a theatrical journey that vividly chronicles the bravery, cunning, and strength that Von Mahlsdorf used to survive both the Nazi and Communist regimes of East Germany. Brilliantly performed by Jefferson Mays in a Tony-winning role, I Am My Own Wife is a thought-provoking, unforgettable portrait of an unlikely hero.

What listeners say about I Am My Own Wife

Such an intriguing story

I absolutely love this story, having seen it in theatre, and Jefferson Mays' performance is truly wonderful

Okay -- disclaimer: I have only listened to about 30 minutes so far; maybe less.

But I wanted to write a review immediately in hopes more people will listen to this astonishing audiobook.

The story, the telling, the characterization, the voicing, the details are all utterly perfect, fascinating, frightening, horrifying, clear, clarifying and absolutely divine.

How the real Charlotta lived is a miracle of art, wit, persistence, courage, and fear. And intelligence. How the author came to the story, absorbed the enormity of it, and pulled it together for an audience -- I'm reminded of baking bread oddly enough. He has taken such individually difficult elements and transformed them to a beautifully told story-play.

Going back for more right now.

PS. Love the title -- as I had often said that to myself over the years.

I’m not sure how I came across this, but it was absolutely amazing to hear! If you have an hour and a half, it is totally worth it. The story, the performance, the settings, the characters, the history, the richness...it is a beautiful piece of history spoken in a stream of entertaining words!
Will suggest this for read to everyone!!

This was very well done. I looked it up and she is a real character worthy of knowing more as bout. The more we know of each other, the more we learn about ourselves.

Absolutely loved this short story. it was bold, powerful, and entertaining. I loved listening to the back and fourth dialogue.

Very enjoyable and a perfect performance. A unique and important story from history and today.

Riveting story so glad to hear it here

A fascinating story and one that should be heard. I remember reading about the Tony award performance of this play and now I get to hear it. Thank you.

Dissapointing storyline, it went all over the place. Title was misleading. Sound effects very cheesy. Stuck it out to the end hoping it would get better but no.

couldn't get into it. nothing against gay or transvestites...just not for me...kinda a boring story

The story line was good, but the performance was spectacular! Mays’ voice is beautiful, seriously was doubting it was one narrator. Genius!!! Thank you so much for providing quality performances! Dee

As amazing on audio as it is on stage

As much as I miss what the stage brings to this solo performance, this audio production does justice to this amazing story.