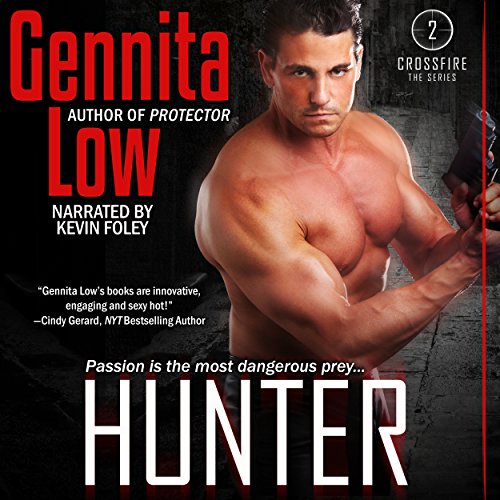 By: Gennita Low
Narrated by: Kevin Foley
Try for £0.00

From the talented pen of Gennita Low comes the second installment in her exciting Navy SEALS trilogy. Hawk McMillan, SEAL commander, is on a lone mission. To get close to Dragan Dilaver, a Kosovo kingpin involved in drugs and arms-rafficking, Hawk helped him escape from Asia and return to his former country of Yugoslavia. Now Hawk has to discover where certain weapons have been dropped for Dilaver over the diverse regions of Montenegro, Macedonia, and Albania - not an easy task for someone unfamiliar with the territory.

In order for the operation to succeed, he needs a tracker and the only available person is CIA contact agent Amber Hutchens. Beautiful and smart, Amber has made a life for herself in Velesta, Macedonia, and she is more than capable of assisting Hawk in finding the cache of hidden weapons. Despite the danger of exposure and torture, they risk everything in their mission to strike down Dilaver and his ruthless gang - even their love.

What listeners say about Hunter

If you could sum up Hunter in three words, what would they be?

What was one of the most memorable moments of Hunter?

I loved the voice he used for Jazz.... throughly enjoyed

What does Kevin Foley bring to the story that you wouldn’t experience if you just read the book?

He makes the story more interesting, love the voices that he does, and just his normal reading voice.

This book made me laugh outloud, but I believe it was combination of the reading and the writing.

I love Amber and Hawk's story. Aside from a very romantic affair, the story is filled with details that bring laughter, anger, satisfaction and entertainment. You won't want to miss this one.

Would you consider the audio edition of Hunter to be better than the print version?

The audio enhanced the pleasure of reading the book

What other book might you compare Hunter to and why?

it is a continuation of her excellent cross fire series

Which character – as performed by Kevin Foley – was your favorite?

I absolutely loved listening to Kevin foley seductive performance of Hawk. I also enjoyed his voice for Lily.

I really enjoyed the exciting story as I fell in love with Hawk straight away and Amber was a very fitting heroine. With Kevin Foley's seductive and sensual voice made Gennita Low's marvellous story so easy to listen to.

Talk about a supercharged story, just wow. For most of the story, my heart was beating so fast logged up in my throat. This is Hawk and Amber's book, they meet, sparks fly from the get go. Loved the way the story unfolded, the author throwing in some twists when least expected. A world of intrigue, suspense, tragedy peppered with some hot sexy scenes, some comical bantering makes this an awesome read. I highly recommend it. I loved it when I read it, but listening to it narrated by Kevin Foley ... WOW ... his voice is amazing, flexible and versatile. With so many characters, genders, nationalities, I didn't have to figure out who's talking, Mr. Foley did a great job. Thank you for hours of enjoyment. Looking forward to listening more.