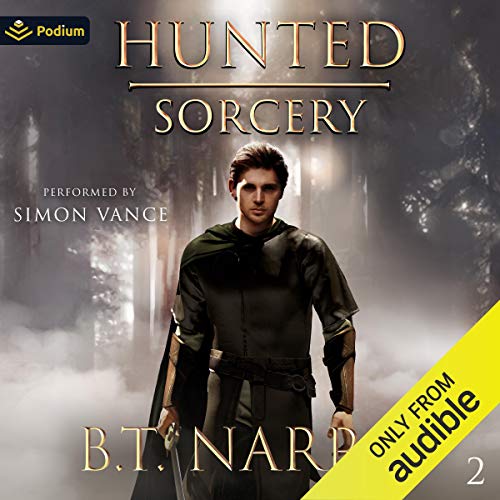 Illegal sorcery is on the rise. The quiet life Jon once had before venturing to the capital is but a distant memory. Murderous threats to the throne skulk through city streets. A rebellious army is growing.

But the king - the overwhelmed ruler of Lycast who Jon has sworn to protect - is just one of many targets. The mages who use this illegal sorcery have a leader, and this leader wants something from Jon.

It wasn’t long ago that Jon came to the castle with seven other sorcerers desperate to prove themselves. While Jon considers many of them his friends, at least one might actually be his enemy.

Those plotting against the king are everywhere, most posing as ordinary citizens. During the hunt for these sorcerers, Jon will learn just how powerful his own sorcery can become, but at what cost? Sacrifices must be made no matter Jon’s choices. Whatever he decides to do, it has to be done quickly. The traitor in the castle is waiting for something, and no one seems to have any idea what it is.

What listeners say about Hunted Sorcery

The first book in this series was quite promising. This book on the other hand was very difficult to get through. I would not recommend if you liked the pace of the first book.

not as good as the 1st

tedious and generic in places. but an okay continuation of the story. C for effort.

Can't tell if I just hate the narrator

Pretty much every character sounds exactly the same and I became insanely irritated but Dark..... Mages. It is possible to say dark mage! I also find Jon a complete twat, but I can't tell if that's due to the narrator making him sound like a self absorbed idiot or if he actually is one. Might try reading the last book as the story does have potential, just really dislike the narrator even though he has a nice voice.

This is a great series, with some excellent character development and storylines. Simon Vance's performance is pitch perfect and his verbal characterisation of each character is a testament to his range and ability. Looking forward to the third installment.

An emotional roller coaster. It was a fun story that advanced the story of Jon Oklar.

I truly love the characters and the dynamics as the story unfolds! An epically worth while read!

Not too deep or complex but enjoyable.

A fun listening experience and I recommend it.

I love the book.

I actually loved the book. I will be recommending this book to all my family. Not to sound like a bot but wow.

This book is interesting but hard to believe in some respects. It is a good idea but learning sorcery and listening to pubescent problems is a stretch for me

Narro has done it again kept me locked into another amazing book! Another great performance by Simon as well!!