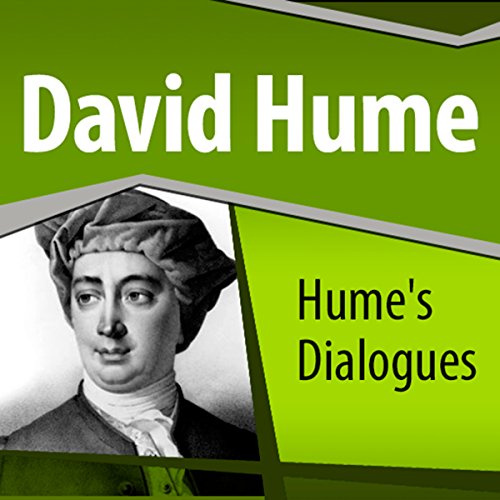 David Hume's Dialogues Concerning Natural Religion had not yet been published when he died in 1776. Even though the manuscript was mostly written during the 1750s, it did not appear until 1779. The subject itself was too delicate and controversial, and Hume's dialectical examination of religious knowledge was especially provocative.

What should we teach young people about religion? The characters Demea, Cleanthes, and Philo passionately present and defend three sharply different answers to that question. Demea opens the dialogue with a position derived from René Descartes and Father Malebranche - God's nature is a mystery, but God's existence can be proved logically. Cleanthes attacks that view, both because it leads to mysticism and because it attempts the impossible task of trying to establish existence on the basis of pure reason, without appeal to sense experience. As an alternative, he offers a proof both God's existence and God's nature based on the same kind of scientific reasoning established by Copernicus, Galileo, and Newton.

Taking a skeptical approach, Philo presents a series of arguments that question any attempt to use reason as a basis for religious faith. He suggests that human beings might be better off without religion. The dialogue ends without agreement among the characters, justifying Hume's choice of dialogue as the literary style for this topic.

What listeners say about Hume's Dialogues

The dialogues exhibit the typical Humean combination of technically proficient but also commonsensical arguments. Hume methodically dispels the haughty aura of self-declared experts in the ivory tower by appealing to the intuitions and the common sense of ordinary people. (In this there are strong echoes of Plato's dialogues.) But he simultaneously, and miraculously, avoids the trap of being caught up in the superstitions and logical fallacies of the uneducated mind.

Hume's skeptical agnosticism, while not as radical as the atheistic materialism of Hobbes or Lucretius, carried out the death sentence of theism and abstract theology. The arguments are rhetorically powerful and framed in a fashion that respects the intelligence of the reader. Religious philosophy has never recovered.

The only thing that drags the dialogues down is the passage of time. They seem partially outdated in the Western world, where Humean skepticism has become fashionable. The even more radical Marxist atheism and New Atheism have seemingly overtaken Humeanism. At the same time, advances in cosmology and biology have rendered some of the scientific speculations in the dialogues moot. But I'm sure Hume would appreciate those things, since he was a fan of radical thinking and science.

And in some ways these new developments have strayed from Hume's teachings. The spirit of Humean skepticism is a precious civilizational heirloom whose true value is easily forgotten by the younger generations. The skeptical attitude has too often been lost in the exuberant hubris of Enlightenment, Marxist, New Atheist, or physicalist-scientistic dogmatism.

Only a perpetual recursion back to Hume can save the critical spirit of humanity from succumbing to the dark nemesis of its own creation: the dogmatic certainty of belief.

Where does Hume's Dialogues rank among all the audiobooks you’ve listened to so far?

I used this audiobook to review Hume's important and entertaining dialogue for a class that I am teaching. I can't imagine that someone might select it for pure pleasure or to pass the time, but after giving it a listen, I can recommend it with some reservation for someone who may not have read the book before. It is a true classic, and has to rank as one of the most influential books of the 18th century and is the basis for much modern naturalist philosophy.
Theologians should also read it and be prepared to respond to the intelligent arguments against natural religion generally and intelligent design specifically.

The dialogue is between three main characters: Cleanthes, an orthodox theist who relies on a version of the teleological argument as a basis for faith; Demea, who expounds a fideist approach to theology, and Philo, a theological skeptic. Each part is played by a different actor, which keeps the dialogue interesting and holds the listener's attention.

So now the bad news. The dialogue, lets say roughly three parts, is recorded out of order. This is a near fatal flaw, as you will hear the end of the dialogue and then in the next session the three are back continuing the conversation. Audible should have the studio who produced the book fix the problem, and it's worth the fix, because the dialogue is so good!

IT IS NOT UNABRIDGED!!!

The performance is good. It is a wonderful piece of literature and philosophy. But the audiobook ends with Part 9. Where are the remaining three parts? Do we forget what "unabridged" means?

Great book, not the best reading of it for philosophic purposes. A simple problem: chapters are divided into 2-3 minute segments. I can't figure out what principle is used--it's not at every change in speaker. But it certainly is not divided into the chapters Hume divided the text into--frustrating when I want to find the corresponding passage in my book &amp; mark it &amp; consider it. A more egregious problem: the narrator ADDS things. This ranges from sighs, chuckles, and grunts to the occasional "oh!", &quot;indeed&quot; or &quot;thank you.&quot; It's distracting when I know these additions are not there, and it's downright frustrating when I don't know whether what is being said is from Hume's pen or the narrator's mind.

Would you be willing to try another one of Ray Childs’s performances?

No! I hate to see what he does with Plato, where the little details are even more important, and might be more easily confused for lines of the actual dialogue.