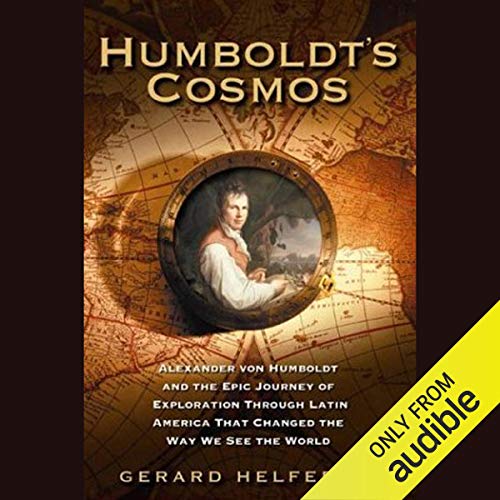 By: Gerard Helferich
Narrated by: Ray Childs
Try for £0.00

The thrilling story of the charismatic explorer who Simon Bolivar called "the true discoverer of South America" and the daring expedition that altered the course of science. From 1799 to 1804 German naturalist and adventurer Alexander von Humboldt conducted the first extensive scientific exploration of Latin America.

At the completion of his arduous 6,000-mile journey, he was feted by Thomas Jefferson and presented to Napoleon, and, with the subsequent publication of his findings, he would be hailed as the greatest scientific genius of his age. Humboldt's Cosmos tells the story of this extraordinary man who was equal parts Einstein and Livingstone, and of the adventure that defined his life. Gerard Helferich vividly recounts Humboldt's expedition through the Amazon and over the Andes, highlighting his paradigm-changing discoveries along the way. During the course of the expedition, Humboldt cataloged more than 60,000 plants, set an altitude record climbing the volcano Chimborazo, and became the first to study the great cultures of the Aztecs and Incas. In the process, he revolutionized geology and laid the groundwork for modern sciences such as climatology, oceanography, and geography and his contributions would influence future greats such as Charles Darwin and shape the course of science for centuries to come.

,p>Published in time for the bicentennial of the expeditions completion in May 1804, Humboldt's Cosmos is a dramatic tribute to one of history's most audacious adventurers, whom Stephen Jay Gould noted "may well have been the world's most famous and influential intellectual."
Public Domain (P)2009 Audible, Inc.

What listeners say about Humboldt's Cosmos

Excellent book about someone I knew nothing about

Humboldt to me was a someone I had never heard of. Now, I am amazed at the things this man accomplished in his life. How much richer the whole world would be if we had more men like this.

Things like: Humboldt Current, Humboldt's Penguin now have new meaning, knowing the man behind them.

The book is nicely narrated as well.

Thoroughly enjoyed the narrator's "character" voices. A compelling story that was hard to "put down".

Where does Humboldt's Cosmos rank among all the audiobooks you’ve listened to so far?

I hardly knew anything about Humboldt. This book gave me new appreciation for the genius of the man. Now, wherever I go, I see things named after him-- and rightly so. A great education in a very enjoyable format.

Excellent review of Humboldt's travel/diacoveries throughout South America and Mexico. I truly enjoyed this book.

Exploring the man they named the current for

Not sure if it's the writing, but Humboldt comes off a little like the stereotypical German tourist. This strikes me as both good and bad (as German tourists tend to be). Example: the mastiff he decides to take into the jungle with him. His "pet" is ultimately (and maybe inevitably?) eaten. Shows a kind of willfulness while at the same time showing the cheerful way he would face privations on his journeyings ("Just need my dog and I'll be fine").