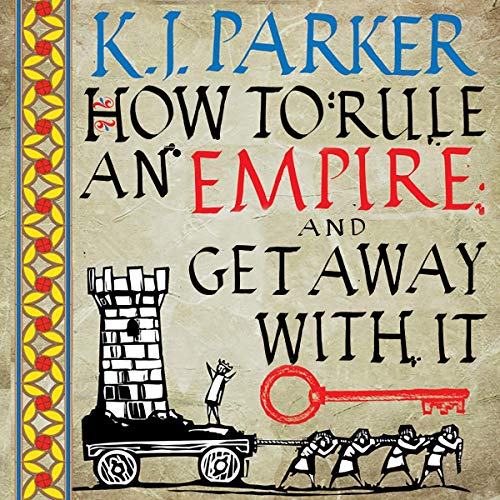 How to Rule an Empire and Get Away with It

This is the story of how the City was saved, by Notker the professional liar, written down because eventually the truth always seeps through.

The City may be under siege, but everyone still has to make a living. Take Notker, the acclaimed playwright, actor and impresario. Nobody works harder, even when he's not working. Thankfully, it turns out that people appreciate an evening at the theatre even when there are large rocks falling out of the sky.

But Notker is a man of many talents and all the world is, apparently, a stage. It seems that the Empire needs him - or someone who looks a lot like him - for a role that will call for the performance of a lifetime. At least it will guarantee fame, fortune and immortality. If it doesn't kill him first.

This is the story of Notker, an occasionally good man and a terrible liar. With razor-sharp prose and ferocious wit, K.J. Parker has created one of fantasy's greatest heroes, and he might even get away with it.

not quite as good as sixteen ways...

the best parts of this book were the references to the previous book. the main character is an actor instead of an engineer, so that might entice some readers. it wasn't as clever or as funny as its prequel, and the ending wasn't as satisfying. I'd recommend "sixteen ways to defend a walled city" to anyone, but unless the author makes this into a trilogy, most people can skip this book.

This reads like a frat guy’s essay for creative writing that he wrote last minute.

I don’t have to convince Parker’s fans to buy his books; they’ll do it anyway - even his weaker books beat most of the low fantasy published nowadays. How to Rule the Empire and Get Away With It is a loose sequel to Sixteen Ways to Defend a Walled City, but it works as a standalone. And it’s great

Notker, a cynic, actor, and playwright has a knack for impersonating influential people. His acting skills and physique allow him to win the audience and make a living. Things get complicated when the enemy’s trebuchet kills Lysimachus, a venerated war hero. Without him, the city is doomed. It turns out Notker resembles him. A bit. He doesn’t have scars, and he dislikes blood and violence, but who cares. Definitely not the conspirators who coerce him into impersonating the hero.

Notker’s ex-girlfriend, Hodda, gets caught up in intrigue as well. To make matters more interesting, she used to date the real Lysimachus. Not to mention other influential figures. The pair gets tangled in a web of lies, and things escalate quickly. The Senate appoints Notker as Emperor and wants him to lead the war against King Ogus and his ruthless warriors. While Hodda plays an important role in the story, we stay in Notker’s head and POV. Like most of Parker’s protagonists, he’s no hero:

Me, I don’t care about the bad guys, so long as they keep the hell away from me. When they get too close in my face, I tell lies and run away. That means I’ll never be a hero, but I don’t mind that. I do character parts and impersonations.


Notker’s sardonic voice, and his cynically philosophical asides about life, love, and politics, charmed me. Despite his shortcomings, Notker makes do. He uses his wit and resources to ensure an exciting and surprising finale. I love Parker's use of tight first-person narration. It always makes me laugh, think, and brood over the condition of humanity.

Ah, the people. My countrymen, my fellow citizens, my brothers. Mind you, some of them are all right, when you get to know them. But a lot of them aren’t; and here’s a funny thing, because when you mix them together, the ones that are all right and the ones that aren’t, as often as not the resulting blend is far worse than the sum of its parts. Greedier, more cowardly, more stupid.


Parker conveys backstories through instant immersion into the everyday life of Notker, an actor turned Emperor trying to save the day against impossible odds. He has no illusions about his countrymen, but he’ll try to help them, anyway.


Much as I enjoyed Sixteen Ways to Defend The Walled City, I liked How to Rule the Empire and Get Away With It more. It feels tighter and Notker is easier to like than Orhan, even if there are a few moments where pacing could be improved. Still, this is a fantastic novel. Parker provides an immersive story with clever twists and uncomfortable truths about human nature and society in elegant yet utterly unpretentious prose.

One could argue that whole of Parker's oeuvre has the same general feel. And that he writes only one character with the same fatalistic but humorous outlook on life. And yet, as a writer, he gets away with it because he does it so well and he always offers unexpected twists. How to Rule the Empire and Get Away With It is darkly funny and cheerfully horrific. I had a great time reading it.

How to Rule an Empire is a decent Parker novel. Enjoyable, great character, and the usual snarky charm.