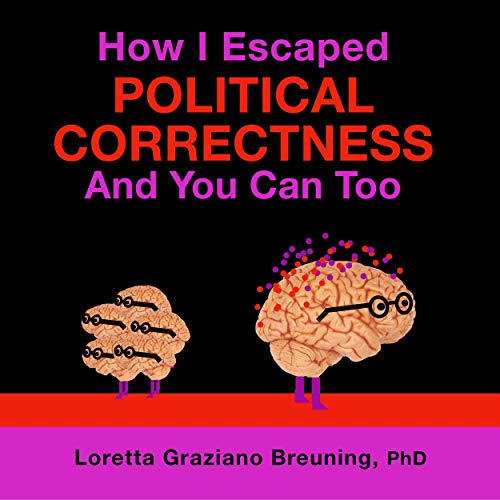 How I Escaped Political Correctness and You Can Too

You care about the greater good, but you want to define it for yourself. What if you disagree with the politically correct view?

You fear ridicule, shunning and attack, so you tell yourself it’s not worth it and find a way to conform. Until one day you can’t.

I was politically correct until the day I heard myself lie about a simple fact because the truth didn’t sound progressive. I froze - in the middle of a lecture to 150 students. Enough! I decided to take back my brain. I gave myself permission to see what I see and know what I know instead of living in fear. It cost me, but the benefits outweighed the costs. Here is the story of my transition. You can do it, too.

This book shows you how:

What do I mean by political correctness?

I do not mean the hot-button dramas that fill the headlines. They are just tribal solidarity rituals. I mean the belief that we are suffering under a “bad system”. Political correctness trains you to feel victimized by bad guys running the bad system, and to fight them by following the leaders of political correctness. If you follow, you get to be one of the good guys and share in the rewards that these leaders control. If you don’t follow, you are labelled a bad guy and excommunicated.

This message is so pervasive that we take it for granted. I only questioned it after decades of noticing a gap between the facts of my life and the politically correct dogma. I saw that the good guys are not all good and the bad guys are not all bad. I tried to overlook the inconvenient facts because I feared excommunication. But when I had kids, I saw how harmful it is for children to be taught that they’re powerless victims. I did not want my kids to blame their frustrations on bad guys and “the system”. I wanted them to believe in themselves instead of just following the lead of political correctness.

Glad I read this book. I'll be reading more Loretta Breuning in future. All trends and movements should be challenged and discected. The rickety stepladder of the 'Woke' left is ripe for a jolt.

THIS IS A BOOK ABOUT THE AUTHORS CONSERVATIVE VIEW

This has to be the worse book I have ever read{listened to} I am not a Political person at all! I also don't agree with Political Correctness! I do believe in getting along and expanding ones Consciouness This is in no way about helping people unless you think like her and feel like a victim because people don't think like she does and her conservative Ideology! I found it totally Divisive. Sadly Using Brain chemistry and her Knowledge of the mammalian brain! To think Audible put it under Health & wellness and Psychology and Mental Health is beyond me! Hopefully I can get my credit back!

The perfect practical application of her previous books

This was a great exemplification of the practical implications of the mammal brain combined with the human power of abstraction. It’s a great way of distancing your perspective and grasping the biological nature of group herds.
I have recommended this book for many acquaintances, and recommend you try it too.

I've always done my best to avoid politics. Or so I thought. I've always professed ignoring it and finding some good to do. After this book I am doubling down on both of those efforts. Thank you to the author for helping me see some of the traps of my own mammalian brain

What a Joy of a Book!

I will listen to this audiobook again. Not because I didn’t understand it the first go through; I was pleased to find I did follow along well with the facts presented here. The author read at the right speed for me and interspersed the information with examples of how other mammals handle similar situations. I have a lot of new info to think about now! Definitely going to mull this over for a time and then listen again.

I really enjoyed this audiobook read by the author. I have read other books by Loretta Breuning and I find the material informative, entertaining & helpful. This audiobook contains some content that is similar to the author's other books (always helpful for me to revisit) and insight into her life and personal journey. I liked this aspect of the book and enjoyed finding the similarities & differences between my journey and hers. Upon listening to the book I feel inclined to contemplate ways that I sensor my interactions with others. The material encourages personal responsibility which I like because it is empowering.